Posted by pufa | December 17, 2015
Prenatal & Infant Health, Clinical Conditions
This article at a glance   Epilepsy is a chronic neurological disorder that can be idiopathic, i.e. occur without a clearly identifiable cause, or can be secondary to an injury of the brain such as a brain lesion following trauma, or cerebral tumours. Epilepsy involves disturbed electrical signaling in the brain, which depending on the site and magnitude, can range from short-lasting absence seizures to generalized seizures with loss of consciousness. In the US it is estimated that approximately 7 out of 1000 people have epilepsy, and 17 out of every 1000 have had some period of a seizure disorder in their lifetimes. Both the frequency and the severity of epileptic attacks are of importance when considering an individualized approach to epilepsy in daily life, or when evaluating potential treatment approaches. The severity of epilepsy involves for example to what extent an attack generalizes, the time from onset to loss of consciousness, the time of recovery from an attack, and the associated injuries from falls, and the intellectual decline.

The most commonly reported efficacy measures in clinical intervention trials in adult epilepsy are the median percent reduction in seizure frequency from baseline, and the percentage of patients that experience a ≥50% reduction in seizure frequency from baseline (≥50% responder rate). The frequency of epileptic attacks varies substantially between individuals. Intractable epilepsy, also termed refractory epilepsy, treatment-resistant epilepsy, or drug-resistant epilepsy is when seizure frequency and severity cannot be adequately controlled with existing anticonvulsant medication. Formally, drug-resistant epilepsy is the failure of adequate trials of two tolerated, appropriately chosen and commonly used antiepileptic drug regimens (whether as monotherapies or in combination) to achieve sustained seizure freedom. Seizure freedom is defined as remission from seizures following an intervention, after a period without seizures has elapsed equal to three times the longest pre-intervention inter-seizure interval over the previous year. Patients with intractable epilepsy need to be very careful in specific situations, for example in traffic or near water, to reduce the risk of serious accidents. Childhood epilepsy has its own characteristics, such as a significant risk to develop co-morbid anxiety and depression, long-term social problems, learning disorders, and a risk of permanent cognitive disturbance. Epilepsy presenting in childhood requires careful evaluation to discern whether a child may forgo medication, would be a candidate for resection epilepsy surgery, or would benefit from treatment with an anti-epileptic drug. Up to 20% of children that develop new onset epilepsy may develop a period of intractable epilepsy, which can last several years. Satisfactory seizure control is furthermore not achieved in a high percentage of children with epilepsy. In addition, children with treatment-resistant epilepsy are at risk of intellectual disability, psychiatric comorbidity, and sudden unexpected death (SUDEP). The early diagnosis and a decision on the best treatment for developing pharmaco-resistant epilepsy is therefore very important in childhood epilepsy. Lack of access to epilepsy treatment, also termed the “treatment gap,” is a particularly serious problem in many low and middle-income countries due to the limited availability of anti-epileptic drugs, lack of primary health-care providers or neurology specialists that can diagnose and treat epilepsy, and social stigma. Although a remission rate of up to 80% of childhood-onset epilepsy has been reported, a similarly high percentage of children that have epilepsy also have to deal with psychological, cognitive and behavioral problems. Good management of epilepsy in children is thus increasingly recognized as necessary before and after the transition into adulthood to limit the development of social and psychiatric complications. There is also a significant need for the identification of existing and new anti-epileptic drugs that have minimum adverse cognitive and behavioral effects. Studies in animals have indicated that omega-3 long-chain polyunsaturated fatty acids (LCPUFA) have anti-convulsant activity, which is mediated by the ability to raise the electrical threshold of experimentally-induced seizure activity. A randomized placebo-controlled double-blind cross-over study in US American adults with partial onset epilepsy, showed that ~1 gram daily omega-3 LCPUFA for 10 weeks reduced seizure frequency by 34% in individuals that continued their anti-epileptic medications. A negative correlation between serum DHA level and seizure duration as well as seizure severity has also been reported in Egyptian children with treatment-resistant epilepsy. A recent intervention study assessed whether it was possible to modify the frequency or intensity of epileptic seizures in children with treatment-resistant epilepsy by dietary supplementation with fish oil. The study was performed by Reda and colleagues from the Department of Nutrition and the Department of Pediatrics, at the Faculty of Medicine, High Institution of Public Health, Alexandria University, Egypt. The children (n=70) had a median number of four recurrent seizures a month at baseline (the month preceding the start of the intervention). They were randomly assigned to two study groups: a fish oil group that received 3 milliliters of fish oil containing 18% EPA and 12% DHA every day during 3 months. The control group received instead the same volume of corn oil. No information was provided on whether the oils were encapsulated. At the start of the study and at monthly study visits, an assessment of the frequency and severity of epileptic seizures was made. 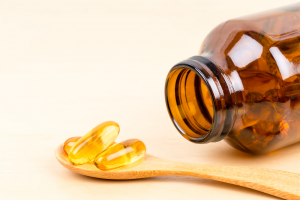 Seizure frequency (number of seizures per month) was determined through the use of a diary that the parents filled out every day. The variation in seizure frequency between the individual children at baseline (the month preceding study initiation) was large; it ranged from 1 seizure per month in approximately 35% of children in both groups, to more than 300 attacks per month in three children (8.6%) in the fish oil group, and one child (2.9%) in the control group. The median seizure frequency was 4.0 attacks per month, with no difference between the two groups. Seizure severity was scored following monthly interviews with the children’s parents, according to the National Hospital Seizure Severity Scale (NHS3) that employs standardized scoring of seven seizure-related factors (scale ranging from 0 to 27). The seizure severity score before intervention was 13 and 12 in the treatment and control groups at baseline, respectively (no significant difference). The mean age of the children receiving fish oil (n=35) was 6.9 + 2.5 years, and that of the children in the control group (n=35) was 6.6 + 2.4 years. No further evaluation of baseline characteristics of the study population or assessment of random differences between the two study groups was made. The ongoing medication of the children was not described in detail. In the first month after starting the daily intake of the fish oil, a ~50% reduction in the median number of seizures was noted. After two and three months this reduction was statistically significant, with the median seizure frequency having decreased to zero. Freedom from seizures was achieved in 60% of the children after two months. After three months, children with the most refractory seizures were two children with 30 seizures per month, whereas 20 of the 35 children in the fish oil group were seizure-free. In the control group no significant effects were noted; the median seizure frequency remained at 4 seizures a month. With respect to seizure severity, no statistically significant changes were noted in both groups. Of the children in the fish oil group that still had seizures at month 3, none had high seizure severity scores (scores of 17-24), whereas in the control group 21% were still having severe seizures. In summary, the results of this study indicate that a 3-month daily intake of fish oil as an add-on to existing medication significantly reduced seizure frequency in children with intractable epilepsy, with a large proportion of children becoming seizure-free during the study period.