This article at a glance

Age-related macular degeneration (AMD) is a disease of the macula lutea, the light-detecting central part of the retina. AMD leads to progressive and severe loss of vision in humans, with incidence strongly related to age. Neovascular or “wet” age-related macular degeneration (wet AMD) is a form of AMD resulting from uncontrolled growth of new capillaries beneath and into the retina. These capillaries are prone to leak blood, serous fluid, and lipid into the spaces surrounding the retina, accompanied by infiltration of inflammatory cells. The name “wet” AMD refers to the exudative aspects of this form of macular degeneration. The pathology ensues from the aberrant invasion of choroidal capillaries through Bruch’s membrane, which separates the choroid from the overlying retina. Wet AMD also involves the disruption of the retinal pigment epithelium that controls the relatively protected immune status of the retina, the nutrient supply and growth factor signaling to the retina, and the photoreceptor turnover. The angiogenic response also frequently gives rise to displacement of the macula, leading to distorted and blurred vision. Progressive retinal damage and scarring involving the fovea can lead to significant perturbation of visual acuity and central vision. Often the loss of dark adaptation and night vision loss are early markers of AMD. Although the causes of AMD are not precisely understood, some researchers have recently put forward the view that AMD is an ocular manifestation of a systemic disorder in which disturbed metabolism and hypertension play important roles.

The prevalence of early, late, and any AMD has been estimated to be approximately 8% worldwide, with people of European descent having a higher prevalence. AMD is estimated to be responsible for approximately 7% of vision loss and 3% of blindness globally. Predictions of global prevalence indicate that a growing number of people will be affected, with an estimated 288 million people having AMD in 2040. Whereas the more common form of macular degeneration, dry AMD, which involves macular atrophy without neovascular growth, is currently still untreatable, significant progress is currently being made in treating wet AMD. Given these projections, all scientific and clinical advances in the understanding, prevention and treatment of AMD are very important.

Vascular endothelial growth factor (VEGF) is a major central signal for neovascular growth. It is a pro-angiogenic cytokine that drives neovascular growth during wet AMD pathogenesis. Significant improvements in the treatment of neovascular AMD have been made in recent years, with the introduction of anti-VEGF therapies that are injected intra-vitreally. These are based on monoclonal antibodies and fusion-proteins that bind VEGF, or aptamers that interfere with formation of VEGF in the eye. The halting of further progression of wet AMD and even reversal of visual acuity loss can be achieved with VEGF inhibitors in a significant part of patients, and is accompanied by an improvement in the quality of life. Earlier detection of AMD and improvement in the therapeutic profile of VEGF inhibitors are current research topics of interest to further improve the treatment of AMD. Improving the effectiveness of anti-VEGF-based therapies is of particular interest since some further loss in visual acuity can still occur during treatment, and may be achieved by limiting macular atrophy that can occur after treatment termination, as well as by further reducing the activity of exudative lesions that may still exist. Reducing the reported side-effects of anti-VEGF treatments, such as a short-term and sustained rise in intra-ocular pressure, thrombo-embolism, suppression of systemic VEGF levels, and endophtalmitis is also the scope for further improvements. 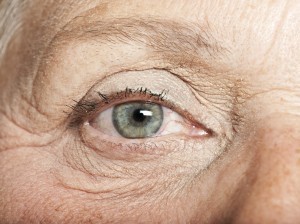 In order to address potential adjunct approaches to current VEGF inhibition therapy in wet AMD, Rezende and colleagues from the Department of Ophthalmology, Maissonneuve-Rosemont Hospital Research Centre, at the University of Montreal in Quebec, Canada, have investigated the potential role of omega-3 LCPUFA supplementation in addition to the antibody treatment of wet AMD with intravitreal anti-VEGF therapy in elderly people. A pilot study was carried out in collaboration with researchers from Harvard Medical School, Boston, MA, and the Clinical Trials Branch of the National Eye Institute at the National Institutes of Health, Bethesda, MD, USA. The study had a prospective design, and was carried out at a single specialized eye clinic.

Twenty patients with active wet AMD that were treated with anti-VEGF-A injections intravitreally on an “as needed” basis, were allocated randomly to two groups. Group 1 received four capsules daily containing in total 400 mg EPA and 200 mg DHA (as fish oil) together with beta-carotene (5728 microgram), vitamin C (500 mg), vitamin E (400 IU), zinc (25 mg), copper (1 mg), lutein (10 mg), and zeaxanthin (2 mg). Group 2 received the same supplement without EPA and DHA. A third group of patients with wet AMD that had not been treated previously with anti-VEGF-A (VEGF-A inhibitor naïve) received no dietary supplementation. The control group (group 4) consisted of patients that had a different and non-vasculoproliferative macular disorder (epiretinal membrane or macular hole). Patients in groups 1 and 2 had received on average eight and six (respectively) anti-VEGF-A injections prior to study enrollment, with the last injection having been received eight weeks earlier. The micronutrients used in group 1 and 2 correspond to those employed in previous AREDS trials. The study description is not explicit about the length of time that patients in group 1 and 2 took their supplements.

The primary outcome of the study was the VEGF-A level in vitreous fluid, carefully harvested by vitrectomy as proximally as possible to the macular site of neovascularization, collected (0.5 ml sample) at the time of the next anti-VEGF treatment (bevacizumap 2.5 mg in 100 microliters). VEGF-A levels in plasma and central foveal thickness represented secondary outcomes. There were no differences in the average visual acuity at baseline or the average age (approximately 81 years) between the patients in groups 1, 2 and 3 with wet AMD.

VEGF-A inhibitor-naïve wet AMD patients (group 3) and patients with wet AMD taking the micronutrient supplement without EPA/DHA (group 2) were found to have similar average vitreous VEGF-A levels (~650 pg/ml), displaying a wide variability that reached up to ~2 ng/ml. In patients that had also taken the EPA/DHA supplementation (group 1), VEGF-A levels were significantly lower than the mean levels in groups 2 and 3, with a mean value of approximately 150 pg/ml. Vitreous VEGF-A levels in patients that had received EPA/DHA (group 1) were similar to the levels measured in the control group. Seven out of nine patients in group 1 had VEGF-A levels lower than all but one patient in group 2. No statistically significant differences in central foveal thickness or in plasma VEGF-A levels were found between the 4 groups.

The results of this pilot study indicate that on a background of micronutrient supplementation, oral supplementation with omega-3 LC PUFA significantly decreases vitreous VEGF-A levels in elderly patients with wet AMD that are being treated with anti-VEGF therapy. The vitreous VEGF-A levels are reduced to a level similar to that in people with a non-vasculoproliferative macular disorder. These interesting observations will need to be confirmed in further studies that should also explore clinical outcome. It appears of interest to understand to what extent the VEGF-A-lowering effect of oral EPA/DHA depends on the co-supplementation with β-carotene, vitamin C, vitamin E, zinc, copper, lutein and zeaxanthin, since several of these micronutrients have been reported to exert a beneficial effect in neovascular AMD. This pilot study had a number of acknowledged limitations. It was an open-label study; the patients receiving supplements knew what supplements they received. The number of treated patients was small. None of the studied people had a diet rich in fish, as only people who consumed less than one serving of fish a week were enrolled. No further assessment of baseline omega-3 intake or omega-3 PUFA status was made. The study authors mention that the levels of omega-3 LCPUFA and PUFA-derived mediators had been measured in the vitreous fluid samples, but that inconsistent variation was noted. The current study did not find a statistically significant decrease in foveal thickness, which the authors attribute to the possibility that additional mediators may be involved in determining macula thickness. Visual acuity was not measured during the trial. Studies with more patients and which control the dietary intake and baseline omega-3 status of patients may confirm if a significant decrease in VEGF-A level in the eye by oral omega-3 LCPUFA supplementation can halt choroidal neovascularization and progressive loss in visual acuity more effectively than anti-VEGF therapy alone.

A range of observational studies have indicated that the dietary intake or supplementation with omega-3 LCPUFA might have favorable effects on wet AMD. A regulatory role of omega-3 LCPUFA in neo-angiogenesis is also appreciated from animal studies that have pointed out the immunoregulatory actions of dietary EPA and DHA that can reduce inflammatory cell activation, regulate angiogenesis, decrease vascular damage, and sustain the immune-privilege of the retina through functional support of the retinal pigment epithelium. Regulation of VEGF levels in murine models of choroidal neovascularization by dietary omega-3 LCPUFA has been demonstrated to involve control at both transcriptional and post-transcriptional level. It has also recently been shown that several derivatives formed from omega-3 LCUFA have potent inhibitory actions on choroidal neovascularization. Given the converging evidence that omega-3 LCPUFA may have an important role to play in controlling neovascularization in wet AMD, long-term and well-controlled studies are now needed to confirm and determine if the observed reduction in VEGF-A by supplementation with omega-3 LCPUFA translates in lesser choroidal neovascularization progression and vision improvement in people treated with VEGF inhibitors.