Posted by pufa | April 29, 2016
Cardiovascular Health
This article at a glance   People adhering to a Mediterranean diet (or Mediterranean-style diet) have reduced risks of cardiovascular and metabolic disease, as well as lower all-cause mortality, when compared to most people in Westernized countries with other dietary habits. The Mediterranean diet is a dietary pattern, with some variation among the Mediterranean regions, but with a number of common elements: the use of olive oil as the main culinary fat, a relatively high consumption of fruit, vegetables, legumes, and unprocessed cereals, water with meals, frequent but moderate consumption of wine, fish and seafood, nuts, sauces made with onions, garlic and leeks, dairy (cheese and yoghurt), and poultry intake, and a relatively low intake of red meat and seed oils. An important nutritional aspect of the traditional Mediterranean diet is a comparatively high intake of omega-3 polyunsaturated fatty acids (omega-3 PUFA), from alpha-linolenic acid (ALA) to eicosapentaenoic acid (EPA) and docosahexaenoic acid (DHA). The Mediterranean diet is also regarded as a cultural heritage with an important social component. 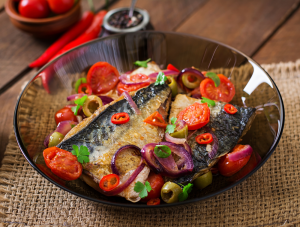 A compelling body of epidemiological studies supports the concept that adherence to a Mediterranean diet results in a lower incidence of cardiovascular disorders and disorders related to metabolic health, such as type 2 diabetes. Short-term effects of the Mediterranean diet relate to improvements in blood lipid profiles, and anti-inflammatory effects are noted after longer intake durations. An important prospectively controlled intervention study that has highlighted the cardiometabolic benefits of the Mediterranean diet is the PREDIMED study, carried out from 2003 to 2011. Follow-up studies continue to be performed in order to learn as much as possible from this unique primary prevention trial. The PREDIMED trial was a multicenter, parallel group, randomized clinical trial focused primarily on determining the effects of supplemental intake of extra-virgin olive oil and nuts in the context of the Mediterranean diet on the primary prevention against cardiovascular disease in a high-risk cohort. This cohort consisted of people 55-80 years of age, with no history of cardiovascular disease at study onset, but who had a relatively high cardiovascular risk - participants had either type 2 diabetes or at least three of the following cardiovascular risk factors: overweight or obesity, hypertension, dyslipidemia, current smoking and a family history of early onset coronary heart disease. The majority (about 92%) of participants did not habitually consume a complete Mediterranean diet at baseline. Participants had been recruited through 11 field centers, each reaching some 20 physician practices on average. The eligible participants (7447) were allocated randomly to one of three groups: i) a Mediterranean diet with supplemental extra-virgin olive oil, ii) a Mediterranean diet with supplemental nuts (walnuts, almonds and hazelnuts), and iii) a control diet consisting of advice to reduce all types of dietary fat. At baseline and during yearly follow-up a dietary assessment was made with a validated food-frequency questionnaire. PREDIMED trained and certified dietitians and nurses continuously helped participants maintain their assigned diets throughout the seven-year study, resulting in relatively high study adherence.

In 2013, the results of the study were published. In both Mediterranean-diet groups the incidence of cardiovascular disease, as a pooled outcome of myocardial infarction, stroke and mortality from cardiovascular causes, was markedly reduced compared to the control group (around 30% reduction in event incidence). All-cause mortality decreased in the extra-virgin olive oil group but was indistinguishable in the control and supplemental nuts groups. The risk for stroke, but not death from cardiovascular causes, was significantly reduced in both Mediterranean diet intervention groups merged together compared to control subjects (with a low fat diet). The PREDIMED study made a very important contribution to the recognition that a change in dietary habits towards the consumption of a limited number of specific food items in the context of adherence to a Mediterranean diet can make an enormous difference in the probability of actually developing cardiovascular disease in people that are at known risk, a situation that is very common in the Westernized world. According to projections published in the 2016 Heart Disease and Statistics update of the American Heart Association, over 70% of American men and women will most probably still remain with a poor diet score by 2020. In a follow-up of the PREDIMED study, Sala-Vila and colleagues assessed if ALA and omega-3 LCPUFA intake were associated with the development of cardiovascular disease in PREDIMED participants. More specifically, they investigated whether adherence to recommended daily dietary intakes of ALA (0.7% of total energy) and to total omega-3 LCPUFA (500 mg/d of EPA plus DHA), as defined by ISSFAL, is related to the development of the risk of all-cause mortality and death from cardiovascular disorders. Although the dietary advice in the PREDIMED study achieved sustained differences in the intake of nuts and extra-virgin olive oil, the dietary intake of many other dietary components did not differ greatly between the three groups during the trial, including fish/seafood and legumes. This allowed the analysis of the relationship between omega-3 PUFA intake and the incidence of death from cardiovascular and other causes by all cohort participants. The dietary intake of omega-3 PUFA was obtained from records of food frequency questionnaires in combination with Spanish food composition tables, allowing the calculation of individual dietary intake of omega-3 LCPUFA intake (from seafood/fish) and of ALA (from soybean oil, walnuts, margarine, corn oil, sunflower oil and olive oil, with the latter three oils containing negligible levels of ALA). The validated questionnaire had also been substantiated against three-day food records. Hazard rates of all-cause mortality, fatal cardiovascular disease, fatal coronary heart disease (acute myocardial infarction, unstable angina, other forms of chronic ischaemic heart disease), sudden cardiac death, and fatal stroke, were determined for the two exposures over a 5.9-year (mean) follow-up time interval. Hazard ratios were used to express relative longitudinal event risks. The associations between omega-3 PUFA intake and hazard rates could be determined for a total of 7202 study participants (data from people with incomplete dietary assessments, implausible fatty acid intakes, or exceedingly low or high total energy intake were excluded). 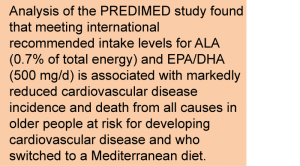 At baseline, 76% of the entire study cohort did meet the daily intake recommendation for omega-3 LCPUFA, but only 22% met the recommended intake of ALA. This suggests that a major proportion of PREDIMED trial participants, while at predicted risk for cardiovascular disease, had a relatively high background of fish consumption (typical for Spain), and a relatively low intake of ALA from vegetable origin. The study reports that while participants shifted to a Mediterranean diet, those individuals that furthermore had an omega-3 LCPUFA intake above 500 mg/d displayed markedly reduced risks of dying from cardiovascular disease (39% lower, P-value 0.032), coronary heart disease (46% lower, P-value 0.046), or sudden cardiac death (51% lower, P-value 0.069). No significant associations between omega-3 LCPUFA intake and all-cause mortality or fatal stroke were found. Interestingly, a dietary intake of ALA above 0.7% energy correlated with a markedly reduced risk of death from all causes (28% lower) compared to participants below this level of ALA intake. No specific associations between ALA intake and death from cardiac causes or stroke were identified. When the hazard rate was determined for participants that met both ISSFAL recommendations for adequacy in daily ALA and omega-3 LCPUFA intake (1296 people), and was compared to that of participants meeting neither recommendation (1431 people), a 37% reduction in longitudinal risk of death from any cause was identified. This result suggests that a change to a Mediterranean diet in older people (average age 67 years) at known risk for cardiovascular disease and achieving an intake of omega-3 LCPUFA and ALA above internationally recommended levels, is associated with a substantial reduction in the chance of dying in the ensuing 6-7 years. The researchers next made a separate analysis of the effect sizes of the associations of ALA adequacy with total mortality in participants assigned to each of the three original treatment arms. Interestingly, those individuals that originally received the supplemental extra-virgin olive oil displayed the strongest reduction in total mortality (49% reduction in hazard rate compared to the control group). 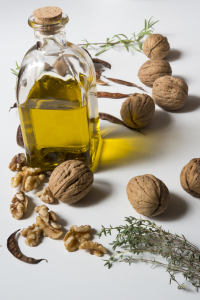 A major achievement of the PREDIMED study was to keep attrition levels low. The free provision of virgin olive oil and nuts, and close follow-up of the intervention groups by certified dietitians and nurses, was designed to help maintain study compliance. The large size of the study was also helpful to identify specific associations of omega-3 PUFA intake with substantial reductions in risk. A limitation of this study is that the results are generalizable only to older people with a risk for cardiovascular disease and who switch to a better diet; however, this age group is likely of high relevance since susceptibility to chronic disease increases at this age. The results are therefore of great relevance, indicating that a Mediterranean-type diet with a sufficient daily intake of omega-3 LCPUFA plus ALA may lead to a substantially reduced risk of cardiovascular disorders and death from cardiovascular and non-cardiovascular origin in this age and risk group. In those participants with an adequate ALA intake, the supplemental intake of nuts, and extra-virgin olive oil in particular, was associated with further beneficial effects on health. Olive oils contain a range of secondary plant metabolites that have reported positive health benefits, with higher concentrations being present in less refined extra-virgin olive oils. As with any observational study, the measured associations cannot be formally used to conclude that the observed relationships are causal, since unidentified confounding factors may explain or contribute to the decreases in disease incidence and mortality. The statistical models were adjusted for a range of potential confounder variables such as age, sex, BMI, smoking status, physical activity, total energy intake, history of diabetes, hyperlipidemia, hypertension, alcohol intake, and dietary factors (fiber, vegetables, fruits and red meat). Small differences in many of these factors were observed in cohort sub-groups that met or did not meet the recommendations for ALA and omega-3 LCPUFA intake. One example of a potential confounder that was not corrected for is linoleic acid intake, a known determinant for the kinetics of omega-3 PUFA tissue and membrane distribution and metabolic interconversion of ALA to longer-chain omega-3 PUFA. 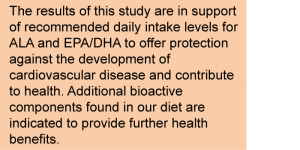