Posted by pufa | December 22, 2017
Cardiovascular Health, Clinical Conditions
This article at a glance Hemostasis is one of the bodies’ vital physiological functions. The stemming of bleeding through coagulation of the blood supports organ and tissue integrity following the rupture of blood vessels by trauma. Coagulation is a fast and efficient process, yet of high complexity because it involves the activation of numerous plasma proteins and of platelets, upon recognition of tissue components exposed by the tissue injury. The product of hemostasis is typically seen as a clot of polymerized fibrin, platelets and trapped cells (erythrocytes and various immune cells) that functions as a barrier to further blood loss and as a structural mesh on which to initiate future tissue restoration. 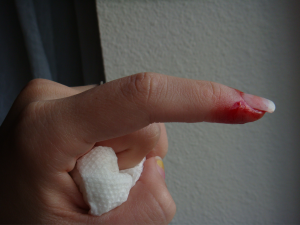 The long-chain polyunsaturated fatty acid (LCPUFA) arachidonic acid (AA) has been known for decades to play a central role in the initial steps of platelet aggregation and ensuing coagulation of blood. Non-steroidal anti-inflammatory drugs, which are inhibitors of cyclooxygenases, the enzymes responsible for the formation of pro-thrombotic eicosanoids such as thromboxane A2 (TXA2), typically reduce hemostasis and also augment the incidence of bleeding events. The omega-3 long-chain PUFA eicosapentaenoic acid (EPA) and docosahexaenoic acid (DHA), in contrast, can reduce aspects of primary hemostasis (platelet activation and aggregation) in healthy individuals, but do not, alone or in combination with either anti-platelet drugs or anticoagulant therapies, increase the risk of clinically-significant bleeding. In addition, omega-3 LCPUFA can modulate a variety of events that follow the coagulation of blood, such as limiting the ischemic injury that may result from thrombus formation, promoting thrombolysis, and supporting tissue regeneration after wounding. Even high doses of EPA/DHA do not increase the risk of adverse bleeding events in elderly patients at risk for adverse cardiovascular events, or peri-surgically, and can improve patient outcomes.

Recent studies have provided indication that the hemostatic response is closely linked to the immune system. For example, following intravascular thrombus formation, neutrophils and monocytes adhere to the locally-activated blood vessel endothelium, interact with activated platelets, and release factors that not only support further coagulation but also an “immunothrombotic” response involving the release of extracellular nucleosomal nets that can trap any contaminating microbial organisms that may be present within a wound or an injured blood vessel. A recent study has now identified a novel function of the hemostatic response, and one in which LCPUFA are clearly required. The study was performed by Norris and colleagues at the Center for Experimental Therapeutics and Reperfusion Injury, at Brigham and Women's Hospital and Harvard Medical School, Boston, MA, USA. Employing a targeted lipidomics approach, the investigators determined if any of the known LCPUFA-derived inflammation-resolving substances identified in their laboratory, called Specialized Proresolving Mediators (SPMs), are formed during clotting. Whole blood was isolated from human volunteers and transferred to silicone-coated tubes, allowing blood to coagulate in a controlled manner. During the first 15 minutes a blood clot rapidly forms, followed by a slow and gradual clot retraction occurring over multiple hours. Clot retraction is the process during which the network of platelets and fibrin fibers progressively tightens and shrinks (up to 10% of its original volume) through the contraction of the platelet filopodia that bind to fibrin. Samples were taken from the clot supernatant over a 24 h period, freeze-thawed to lyse blood cells and extracted for the analysis of PUFA-derived lipid mediators. From approximately 4 h onwards, the serum became increasingly clear, indicating a progressive increase in adherence of blood cells to the blood clot. Employing targeted lipidomics analysis the researchers measured the formation of groups of LCPUFA-derived lipid mediators, namely prostaglandins, leukotrienes, EPA-derived (E-series) resolvins, DHA-derived (D-series) resolvins, protectins, maresins and lipoxins. 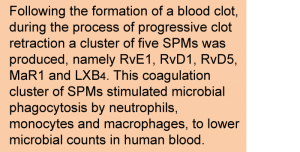 As expected, rapid formation of thromboxane A2 (important for platelet aggregation and thrombus formation) and leukotriene B4 (a potent activator of several blood cell types), occurred during the first minutes of coagulation. Completely new was the finding that a cluster of LCPUFA-derived specialized pro-resolving lipid mediators (SPMs), which activate the resolution of inflammation, started to be produced from approximately 1 h onwards and their levels increased during the entire 24 h period. This cluster comprised a limited number of distinct SPMs known to date, specifically the EPA-derived resolvin E1 (RvE1), DHA-derived RvD1, RvD5, and maresin 1 (MaR1), and AA-derived lipoxin B4 (LXB4). The anticoagulant heparin nearly completely blocked SPM formation, and interference with the aggregation of platelets and their clot-retracting activity (by inhibiting the platelet integrin αIIbβ3) reduced SPM formation by half. Taken together, the study revealed that during coagulation a specific set of mediators is produced from AA, EPA and DHA with recognized inflammation-resolving activity, which is distinct from the AA-derived eicosanoids that mainly contribute to regulating primary hemostasis. The results obtained with the human whole blood coagulation experiment were confirmed to also occur in an in vivo murine model for hemorrhagic inflammation (thrombin-promoted acute sterile peritonitis). Given the known inflammation- and infection-resolving activities of these and other SPMs, the study next addressed the question whether the coagulation cluster SPMs exerted any of their known innate immune system-modulating and host defense-promoting properties also in the context of coagulation. Employing a novel cell profiling approach (CYTOF time-of-flight mass cytometry) to determine the activation of multiple immune cells in human whole blood at the same time for a range of cell-surface markers and intracellular signaling pathways, the researchers found that individually each of the five SPMs activated specific intracellular signaling pathways (ERK, CREB and MAPK pathways) in neutrophils and in monocytes. In addition, RvD5 and LXB4 also activated a specific signal transduction (P70-S6 kinase) pathway in B-lymphocytes. The combination of the five SPMs also enhanced the phagocytosis of live bacteria by neutrophils, monocytes and macrophages. In addition to this hallmark of inflammation resolving activity, the panel of SPMs concentration-dependently stimulated the killing of bacteria in whole blood (a significant bactericidal effect was observed at 1 nM, and the maximum observed effect at 50 nM). Phagocytosis of bacteria by human macrophages was more efficient with a combination of all 5 SPMs, than with each SPM alone. The results of the study show that in addition to the well-known function of hemostasis, the clotting of blood leads to the formation of a distinct set of SPMs that activate the innate immune system to phagocytoze and kill microbes. This proof of concept is revolutionairy in its insight that a wound not only leads to coagulation to stem bleeding but may also trigger disinfection. This slower onset defensive role of the hemostatic process is mediated by mediators derived from AA, EPA and DHA. It was previously tacitly assumed that a blood clot would contribute to blocking and trapping any microorganisms that would opportunistically infect a wound, but an active metabolic role of the blood cells and platelets involved in forming a clot to produce substances that activily speed up microbial clearance was not foreseen.

It is worth noting that the levels of the coagulation cluster SPMs are extremely low (picomolar to low nanomolar), but are in the physiological range at which these mediators act at specific G-protein coupled cell surface receptors. Importantly, and of relevance for other studies in this area, the researchers also showed that when adenosine was removed from the incubation mediums (using the enzyme adenosine deaminase), a much higher production of the antimicrobial SPM cluster was uncovered. This demonstration indicates that formation of adenosine negatively regulates SPM formation, at least during coagulation, which is of relevance to studies aiming to measure the formation of SPMs but where adenosine may be released unknowingly, for example as a result of mild hemolysis. This research expands on the recognized important role that AA, EPA and DHA play in host defense, through specific mediators produced from these fatty acids, by actively protecting the host from infections while keeping the inflammatory tone under control to avoid runaway tissue damage. Further research in this area will undoubtedly increase our understanding of the need for sufficiency in AA, EPA and DHA tissue levels, the intricate biotransformation of these special fatty acids to biologically-active mediators, and reveal novel mechanisms of action. The insight that blood clots are active producers of SPMs may also be of particular relevance to a range of clinical situations where thrombotic events occur, as mentioned by the authors, such as in surgery, infection, vascular inflammation, stroke and cancer.   Norris PC, Libreros S, Chiang N, Serhan CN. A cluster of immunoresolvents links coagulation to innate host defense in human blood. Sci. Signal 2017;10(490).  [PubMed]   Worth Noting Begtrup KM, Krag AE, Hvas AM. No impact of fish oil supplements on bleeding risk: a systematic review. Dan. Med. J. 2017;64(5):1-11.  [PubMed] Chiang N, Dalli J, Colas RA, Serhan CN. Identification of resolvin D2 receptor mediating resolution of infections and organ protection. J. Exp. Med. 2015;212(8):1203-1217.  [PubMed] Cohen I, Burk DL, White JG. The effect of peptides and monoclonal antibodies that bind to platelet glycoprotein IIb-IIIa complex on the development of clot tension. Blood 1989;73(7):1880-1887.  [PubMed] CYTOF time-of-flight mass cytometry - Atkuri KR, Stevens JC, Neubert H. Mass cytometry: a highly multiplexed single-cell technology for advancing drug development. Drug Metab. Dispos. 2015;43(2):227-233.  [PubMed] Dalli J, Serhan CN. Immunoresolvents signaling molecules at intersection between the brain and immune system. Curr. Opin. Immunol. 2017;50:48-54.  [PubMed] Primary and Secondary Hemostasis: Gale AJ. Current understanding of hemostasis. Toxicol. Pathol. 2011;39(1):273–280.  [PubMed] Jeansen S, Witkamp RF, Garthoff JA, van Helvoort A, Calder PC. Fish oil LC-PUFAs do not affect blood coagulation parameters and bleeding manifestations: Analysis of 8 clinical studies with selected patient groups on omega-3-enriched medical nutrition. Clin. Nutr. 2017;17(Mar 29):1-10.  [PubMed] Schulz C, Engelmann B, Massberg S. Crossroads of coagulation and innate immunity: the case of deep vein thrombosis. J. Thromb. Haemost. 2013;11(Suppl. 1):233-241.  [PubMed] Wachira JK, Larson MK, Harris WS. n-3 Fatty acids affect haemostasis but do not increase the risk of bleeding: clinical observations and mechanistic insights. Br. J. Nutr. 2014;111(9):1652-1662.  [PubMed] Whyte CS, Mitchell JL, Mutch NJ. Platelet-mediated modulation of fibrinolysis. Semin. Thromb. Hemost. 2017;43(2):115-128.  [PubMed]