Posted by pufa | August 29, 2015
Cardiovascular Health
This article at a glance   Introduction A growing body of animal and clinical research continues to document the cardioprotective effects of the omega-3 long-chain polyunsaturated fatty acids (LCPUFA) and their mechanisms of action, supporting the view that their intake can contribute to a reduced risk of cardiovascular mortality. A reduced incidence in sudden cardiac death associated with arrhythmias of the ventricles following a heart infarct is one important contribution that higher dietary intake and endogenous levels of EPA and DHA make to this risk reduction. Loss of viable myocardial tissue resulting from an ischemic event in the coronary circulation is considered an important contributor to deranged electrical conduction that precipitates fatal arrhythmia. The length of the ischemic insult due to a coronary artery obstruction is a critical factor that defines myocardial damage in acute myocardial infarction (AMI). In current clinical practice, however, impaired myocardial reperfusion is also a significant determinant of clinical outcome in AMI patients, since in many countries the larger part of people with a heart infarct are treated with reperfusion therapy. Reperfusion therapy through timely removal,

disruption, or dissolution of a blood clot obstructing a coronary artery by percutaneous coronary intervention (PCI) or thrombolysis is live-saving. It limits the size of an infarct, preserves contractile function of the left ventricle, and reduces the development of heart failure. However, PCI and thrombolytic therapy also impart their own risks, which are related to so-called ischemia/reperfusion (I/R) tissue injury. The reperfusion of a temporally-occluded part of any organ can contribute to a significant extent to loss of viable organ tissue. Activation of oxygen- and nitrogen radical-mediated tissue damage occurs upon reoxygenation, as well as aberrant activation of neutrophil-dominated inflammation. In PCI, a widely employed surgical procedure to re-open one or more blocked coronary arteries, reperfusion of the affected ischemic tissue will occur, causing a certain degree of ischemia-reperfusion injury depending on the time of ischemia until PCI or thrombolysis, and on the endogenous tissue-protective and anti-inflammatory local mechanisms that are operative. The success of reperfusion therapy is an important determinant for clinical outcome. Pharmacological and mechanical approaches to protect myocardial tissue from reperfusion injury have been developed. Progress in PCI techniques and improved thrombolytic approaches, as well as an improved mechanistic understanding of myocardial I/R injury, and of secondary microvascular obstruction, and microvascular damage with intramyocardial hemorrhage, after PCI, will likely bring about further improvements. Still, even with much understanding and many intervention and treatment options, ischemic heart disease remains the most common cause of death in many countries in the world. 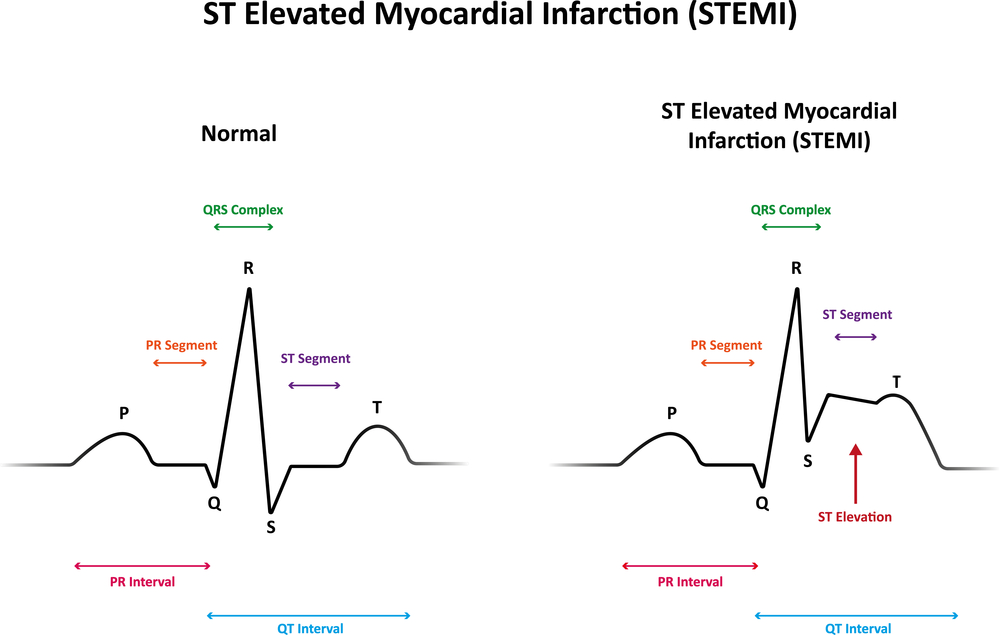 Narrowing Down Patient Variables A role for omega-3 LCPUFA in protecting the myocardium has not been formally demonstrated within the context of reperfusion therapy in ischemic heart disease in humans. DHA is known to be rapidly incorporated and retained in myocardial membrane lipids, and may play a regulatory function in myocardial electrophysiology. A recent observational study has addressed the potential association of serum omega-3 LCPUFA levels with I/R-injury and clinical effects of myocardial damage in patients with ST-segment elevation acute myocardial infarction (STEMI) that underwent PCI. The research was by Dr. Kantaro Arakawa at the Division of Cardiology at Fujisawa Hospital in Kanagawa, Japan, together with colleagues from Yokohama City University Hospital Medical Center and School of Medicine. Data from 221 patients with STEMI were analyzed to identify which patient variables correlated with ST-segment re-elevation and reperfusion arrhythmias as outcome of myocardial reperfusion injury.

These patients had shown ST–segment re-elevation on electrocardiograms recorded during pre-hospital cardiopulmonary resuscitation, stenosis of ≥90% of lesion diameter, a TIMI flow grade of 0 or 1 (a standardized measure of coronary blood flow), and an increase in serum creatinine kinase that surpassed twice the maximal normal level. Emergency PCI had been performed within six hours after chest pain onset. The patients included 160 men and 51 women, with an average age of 67 years. Blood samples were analyzed for fatty acid composition of serum after transmethylation of all serum lipids. Infarct size was estimated using the serial QRS scoring system prior to PCI, one hour after PCI, and at hospital discharge. In order to appreciate if the blood levels of omega-3 LCPUFA might carry any predictive value to the extent of myocardial I/R injury, the patients were divided into two equally sized groups on the basis of the sum of EPA and DHA before angiography (median 155.0 microgram/ml), one (group L) had EPA ± DHA levels < 155 microgram/ml (n=106), and the second group (H) had levels ≥ 155 microgram/ml (n=105). Besides the significantly different blood levels of EPA and DHA, the baseline clinical characteristics of these two groups did not show significant differences for a range of variables related to other disease incidence, drug use, clinical chemistry, blood pressure and heart rate, and an estimation of the myocardial area at risk. Some differences were noted: a lower percentage of smokers in group H (29% vs 52%), and a higher use of calcium channel blockers in group H (33% vs 19%). Group H also showed a small but significant increase in the level of arachidonic acid, but the ratio of EPA to AA was more than two-fold higher in group H compared to group L. Results

The researchers did not find any correlation between the time of blood sampling after symptom onset and EPA+DHA levels in blood, indicating that acute myocardial infraction did not alter blood omega-3 LCPUFA levels. In patients of group L the increase in QRS score after PCI was significantly higher than in group H, indicating that infarct size was considerably higher (Table 1). It remained high upon hospital discharge, suggesting that myocardial scarring remained significantly greater in patients with a lower blood omega-3 LCPUFA levels. Immediately after PCI-initiated reperfusion, both ST-segment re-elevation and reperfusion ventricular arrhythmias were significantly lower in group H patients (Table 1). These findings indicate that I/R injury is substantially reduced in patients with higher EPA+DHA levels. Serum EPA+DHA levels correlated well with I/R injury when analyzed by univariate and multivariate regression analysis. Having pre-myocardial infarction angina, as well as the length of ischemia prior to PCI, also correlated significantly with I/R injury. Based on the results, the authors calculated a highest predictive level (a combination of optimal sensitivity (true positive rate) and specificity (true negative rate)) of serum EPA+DHA level in calculating ST-segment re-elevation of 157 microgram/ml. For reperfusion arrhythmias, 135 microgram/ml had the highest predictive value. 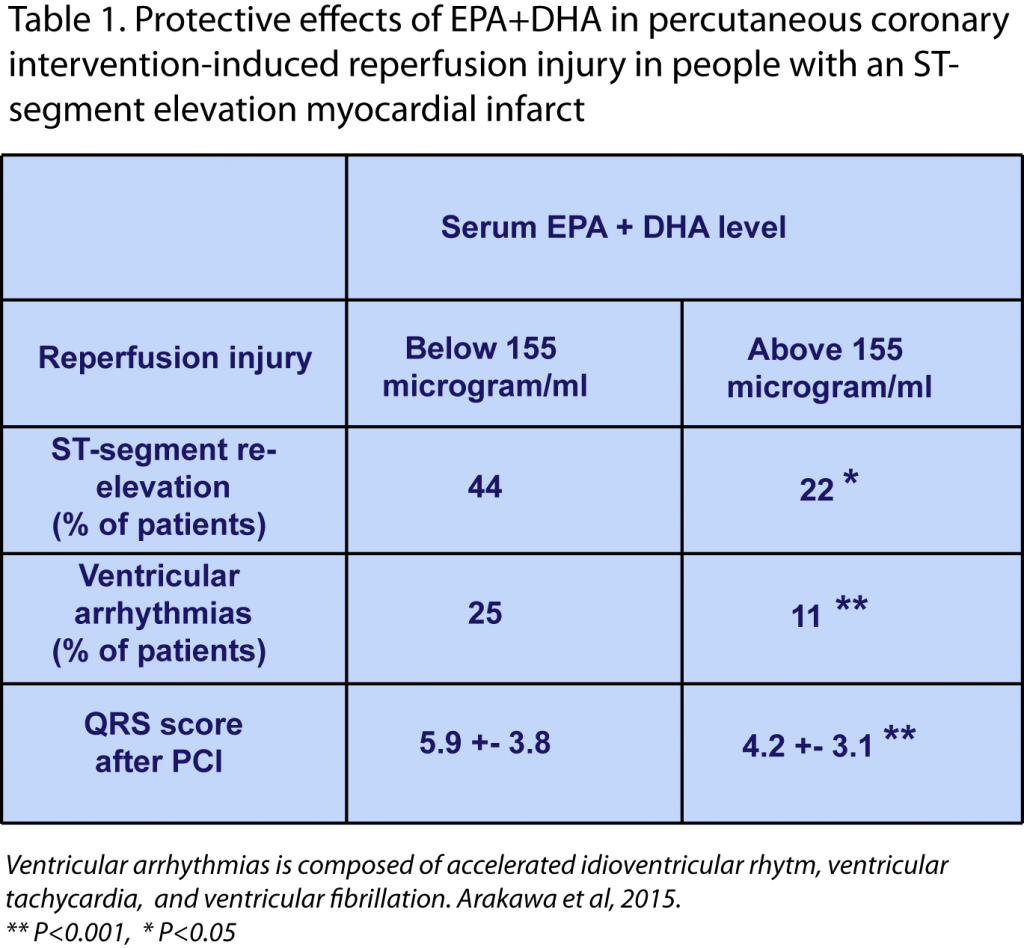