Depressive Symptoms Not Prevented by EPA or DHA Supplementation in Pregnancy 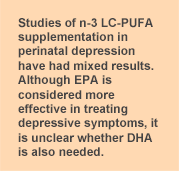 Perinatal depressive illness has implications for pregnancy outcomes, the development of a healthy mother-child relationship, infant and child development and the mother’s ability to cope with the stress of caring for a newborn. Prevalence estimates suggest that major and minor episodes of depressive symptoms during pregnancy and the first year after delivery affect 12 to 16% of women, with occurrences more frequent during pregnancy than after delivery and among women with a history of mental disorders. Although some medications, especially selective serotonin reuptake inhibitors, are increasingly prescribed for pregnant women, they may be associated with abnormal infant outcomes and may not be well tolerated. However, more than 13% of pregnant women in the U.S. receive prescriptions for antidepressant medications. Psychotherapy is also useful and effective for treating women with depressive symptoms during pregnancy. Low intakes of n-3 LC-PUFAs are a consistent observation among pregnant women in Western countries and have been associated with higher levels of depressive symptoms in pregnancy and postpartum depression. Studies of n-3 LC-PUFA supplementation in perinatal depression have had mixed results. A meta-analysis of 7 randomized controlled trials concluded that supplementation had no effect on perinatal depressive symptoms, but the quality of the trials was considered low-to-moderate. A more recent meta-analysis of n-3 LC-PUFAs in major depressive disorder concluded that n-3 LC-PUFAs have a small nonsignificant benefit, but that published results are largely attributable to publication bias. Other analyses have indicated that EPA appears to be more effective than DHA in treating depressive symptoms. Against this unhopeful background, Ellen Mozurkewich and colleagues at the University of Michigan Medical School examined the effectiveness of an EPA-rich fish oil, a DHA-rich fish oil or a soy oil placebo on the prevention of depressive symptoms during the perinatal period in 126 pregnant women at risk of the condition. Participants in the study had a singleton pregnancy, gestational age of 12 to 20 weeks, scores from 9 to 19 on the Edinburgh Postnatal Depression Scale, a past history of depression, but without a current major depressive disorder, no substance abuse or bleeding disorder and were not taking n-3 PUFA supplements or antidepressant medications. Eligible women were randomly assigned to consume either 1,060 mg EPA + 274 mg DHA per day, 900 mg DHA + 180 mg EPA or a soy oil placebo. At enrolment, the investigators took a blood sample and administered the Beck Depression Inventory (BDI) and Mini-International Neuropsychiatric Interview (MINI) assessments. Follow-up visits occurred at 26 to 28, 34 to 35 weeks’ gestation and 6 to 8 weeks’ postpartum, at which the BDI and MINI assessments were given again. Blood samples were obtained at 34 to 36 weeks’ gestation and umbilical cord blood collected at delivery. Of the 126 women who were assigned to the treatments, 8 discontinued participation and 16 others did not complete the postpartum followup visit. Intention-to-treat analysis included 118 women. At 34 to 36 weeks’ gestation and at 6 to 8 weeks’ postpartum, BDI scores did not differ among the treatment groups by one-way analysis of variance. However, significant differences were observed in the relationship between BDI scores and serum DHA concentrations in the mothers who consumed the DHA-rich fish oil, but not in those taking the EPA-rich oil. This relationship was not significant at 6 to 8 weeks’ postpartum. As shown in the table, mothers in the DHA group had slightly, but significantly longer gestation times compared with the EPA and placebo groups. Infants born to the DHA mothers were significantly heavier and had higher 5-minute Apgar scores. 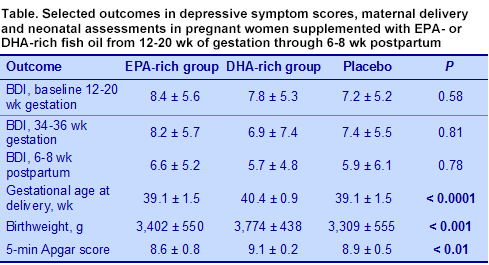 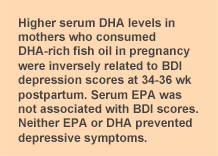 These findings showed that EPA supplementation of pregnant women at high-risk of perinatal depressive symptoms did not affect the BDI scores. In contrast, higher serum DHA concentrations were inversely related to BDI scores at 34 to 36 weeks’ gestation, but not at 6 to 8 weeks’ postpartum. The authors also noted that all BDI scores improved at 6 to 8 weeks’ postpartum, but differences were not significant. These observations do not support the conclusion that EPA is more effective than DHA in reducing the risk of depressive illness. They are consistent with other findings that DHA-rich fish oil did not prevent depressive symptoms in pregnant women.  Further, DHA supplementation was associated with slightly, but significantly, longer gestation times, increased infant birthweight and higher 5-minute Apgar scores. There is some question whether the participants met the study criterion of an average BDI score of 8.4, expected from literature reports. Only the EPA group had a mean score of 8.4, with the other groups having lower, but not significantly different, scores. As other studies have shown, supplementation with DHA during pregnancy is associated with improved maternal and neonatal outcomes, along with increased DHA and total n-3 LC-PUFAs in umbilical cord serum. No effect on perinatal depression was observed.   Mozurkewich EL, Clinton CM, Chilimmigras JL, Hamilton SE, Allbaugh LJ, Berman DR, Marcus SM, Romero VC, Treadwell MC, Keeton KL, Vahratian AM, Schrader RM, Ren J, Djuric Z. The Mothers, Omega-3, and Mental Health Study: a double-blind, randomized controlled trial. Am J Obstet Gynecol 2013;208:313-319. [PubMed]