DHA and Low-Dose Aspirin, a Promising Treatment for Periodontitis

Posted by pufa | December 18, 2014
Clinical Conditions
One of the most common afflictions in people is gingivitis, a mild inflammation of the gums. Uncontrolled gingivitis can lead to periodontitis, inflammation of the tissue structures underlying the gums, affecting the integrity and anchoring of the teeth. Severe periodontitis was recently reported to affect 11% of the world population and ranks among the 10 most common human diseases. Periodontitis not only affects oral health, but is now strongly suspected to also augment the risk for some systemic diseases that have an inflammatory component, such as cardiovascular disease. 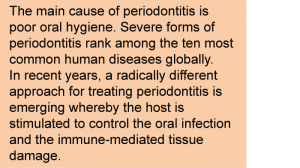 The main cause of periodontitis is poor oral hygiene, allowing the growth of harmful bacteria in plaques at the border of the gums. The infection triggers a sustained inflammation of the gums, leading to loss of adherence of the gums to the teeth with the formation of a deepening sulcus (space between the gums and teeth). Sustained inflammation can lead to further retraction of the gums and microbial colonization of periodontal pockets, with loss of supporting structures, exposure of the tooth roots, and damage to the teeth. Other factors such as poor nutrition, smoking, stress and some diseases can contribute to the development of periodontitis. Intervention in periodontitis involves specialized cleaning procedures and surgical intervention, as well as the use of antibiotics, and is generally focused at keeping sub-gingival and periodontal infection at bay. Surgical intervention techniques are also applied to remodel the damaged tissue to try restoring tissue shape. Periodontitis can be halted with proper oral care, but as lost tissue is considered to have limited, if any, capacity to renew, the aim of maintenance regimens is to stop further progression of tissue damage.

In recent years, a different approach is emerging whereby the host is stimulated to control the oral infection and the immune-mediated tissue damage. Experimental research a few years ago showed that in a rabbit model of periodontitis, the EPA-derived lipid mediator resolvin E1 (RvE1), applied locally, was capable of lowering the inflammatory response, halting further tissue damage, and inducing the restoration of lost tissue including bone. RvE1 is formed from EPA under conditions of inflammation where the type 2 cyclooxygenase enzyme is acetylated by aspirin. Whereas there is no clinical evidence from experimental trials that aspirin alone, or supplementation with LC omega-3s alone, affect the incidence of periodontitis, two recent randomized controlled studies have highlighted the effectiveness of the combination of aspirin and DHA to improve the outcome of a regenerative surgical therapy, and a scaling and root planing procedure. The combination of long-chain omega-3 fatty acids EPA and/or DHA together with aspirin is now being advanced as a paradigm shift and low-cost intervention in periodontal therapy. Now, Naqvi and colleagues at the Beth Israel Deaconess Medical Center, the Harvard School of Public Health, both in Boston, MA, and the Forsyth Institute in Cambridge, MA, USA, have addressed the possibility that the combination of DHA and aspirin, without any concomitant surgical or non-surgical intervention, is able to produce protective effects in moderate periodontitis in adults. Thereto, 55 men and women, aged 40 years and above, with moderate periodontitis were recruited. They had at least four teeth with pocket probing depths greater or equal to 5mm, and had at least 20 natural teeth. Pocket depth is the depth of the sulcus formed between the gums and the teeth, measured by a dentist using a millimetric periodontal probe. The participants were randomized into two groups in a parallel double-blinded design. All participants received a daily 81 milligram dose of aspirin (2-acetylsalicylic acid). This daily amount of aspirin is considered a “low dose”. One intervention group received four daily capsules each containing 509 mg DHA (daily dose approximately 2 g DHA). The control group received four identical capsules containing a mixture of corn oil and soybean oil.

The intervention period lasted for three months, after which the participants returned for periodontal assessment. The primary outcome assessment was per-pocket change in pocket depth in periodontal pockets with a baseline depth ≥5 mm. The gingival index (a measurement of the level of inflammation of the gums), and the plaque index (a measurement of the level of plaque and soft matter adherent to the teeth surfaces and margin of the gums), were also determined. Additional information on local and systemic inflammation was obtained from measurements of high-sensitivity C-reactive protein (hsCRP), interleukin-6 (IL-6) and IL-1β in crevicular fluid (the inflammatory fluid accumulating in periodontal pockets), and the plasma levels of hsCRP, IL-6, VCAM and N-terminal telopeptides. Forty-six participants completed the study. The red blood cell membrane levels of long-chain omega-3 PUFA were measured as well. 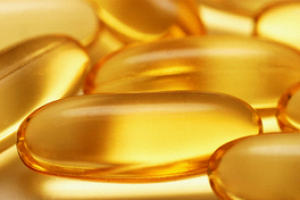 Average red blood cell membrane DHA levels increased from 3.6% to 6.2% in the participants who received 2 g DHA daily, but remained unchanged in the control group. The study showed that over the three month period, the mean pocket depth of pockets with a baseline depth ≥5 mm decreased significantly more in the people who received DHA and aspirin than in participants who only took aspirin. A clinically significant reduction of pocket depths of 2 mm was more likely to occur in the DHA group than in the control group, and DHA supplementation also significantly reduced the number of probing sites with pocket depths ≥5 mm. DHA furthermore reduced the gingival index, but had no effect on the plaque index. A reduction in inflammation, as suggested by the reduced gingival index, was confirmed by the significantly reduced crevicular levels of hsCRP and IL-1β, compared to the control group. No significant differences were found in the systemic levels of inflammatory cytokines between both groups. The authors took great effort to rule out any loss of blinding during the research, and the involved dentists were inter-validated for their ability to make periodontal assessments in a reproducible manner.

In summary, this carefully executed intervention study provides us with the first clinical experimental evidence that supplemental DHA together with low-dose aspirin may be a suitable approach to halt and reverse moderate periodontitis in adults, in the absence of other periodontal interventions. The trial had a relatively small sample size, and larger trials will provide greater power to demonstrate and substantiate the promising findings. The observed effect of DHA and low-dose aspirin in this study should not be extrapolated to the suitability of other long-chain PUFA such as EPA. On the other hand, EPA may be expected to function as well, since it has been originally shown that the aspirin-triggered EPA derivative RVE1 is efficacious in a rabbit model of periodontitis. Undoubtedly, we will see further progress in the treatment of periodontitis based on the principle that stimulating the host anti-inflammatory and inflammation resolving response may be a beneficial way to improve oral health.   Naqvi AZ, Hasturk H, Mu L, Phillips RS, Davis RB, Halem S, Campos H, Goodson JM, Van Dyke TE, Mukamal KJ. Docosahexaenoic acid and periodontitis in adults: A randomized controlled trial. J. Dent. Res. 2014;93(8):767-773. [PubMed]   Worth Noting Elkhouli AM. The efficacy of host response modulation therapy (omega-3 plus low-dose aspirin) as an adjunctive treatment of chronic periodontitis (clinical and biochemical study). J. Periodontal. Res. 2011;46(2):261-268. [PubMed] El-Sharkawy H, Aboelsaad N, Eliwa M, Darweesh M, Alshahat M, Kantarci A, Hasturk H, Van Dyke TE. Adjunctive treatment of chronic periodontitis with daily dietary supplementation with omega-3 fatty acids and low-dose aspirin. J. Periodontol. 2010;81(11):1635-1643. [PubMed] Hasturk H, Kantarci A, Ohira T, Arita M, Ebrahimi N, Chiang N, Petasis NA, Levy BD, Serhan CN, Van Dyke TE. RvE1 protects from local inflammation and osteoclast-mediated bone destruction in periodontitis. FASEB J. 2006;20(2):401-403. [PubMed] Hasturk H, Kantarci A, Goguet-Surmenian E, Blackwood A, Andry C, Serhan CN, Van Dyke TE. Resolvin E1 regulates inflammation at the cellular and tissue level and restores tissue homeostasis in vivo. J. Immunol. 2007;179(10):7021-7029. [PubMed] Hasturk H, Kantarci A, Van Dyke TE. Paradigm shift in the pharmacological management of periodontal diseases. Front. Oral Biol. 2012;15:160-176. [PubMed] Kassebaum NJ, Bernabé E, Dahiya M, Bhandari B, Murray CJ, Marcenes W. Global burden of severe periodontitis in 1990-2010: a systematic review and meta-regression. J. Dent. Res. 2014;93(11):1045-1053. [PubMed] US Department of Health and & Human Services, Agency for Healthcare Research and Quality. Soni, A. Aspirin Use among the Adult U.S. Noninstitutionalized Population, with and without Indicators of Heart Disease, 2005. http://meps.ahrq.gov/mepsweb/data_files/publications/st179/stat179.shtml What is Periodontitis – European Federation of Periodontology: http://www.efp.org/public/more-on-periodontitis.html