DHA - Are Memories Made of This?

Posted by pufa | December 22, 2017
Mental Health and Cognition, Brain & Central Nervous System
This article at a glance   Distinct psychiatric disorders frequently display similar and overlapping functional disruptions, pointing to the possibility that disruption of common brain circuits is shared among psychiatric diseases. By reframing of neurological disorders on the basis of specific disruptions in modular brain circuits, “circuit-based analysis” may provide new insight into functional deficits, in addition to the present symptomatic classification. A better understanding of the neuronal circuits with important functional roles could provide new approaches to prevention, diagnosis and treatment of different neurological disorders. There is still a lot to learn, particularly in humans, about the detailed architecture of cerebral neuronal circuits, for example the sets of neurons that are involved in specific pathways and how their activity is regulated. Neuroscience also continues to define which neurotransmitters are involved in specific pathways and how the dynamic interactions between neurons are regulated by neuroactive molecules. 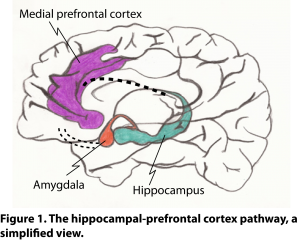 The hippocampus-prefrontal cortex pathway (H-PFC pathway; Fig. 1) is one of the circuits that is viewed as a potentially important target for the treatment of several psychiatric diseases, such as schizophrenia, major depression and post-traumatic stress disorder. The H-PFC pathway is central to fundamental cognitive processes, such as working memory and learning, and contextually-dependent emotional regulation, such as being able to adequately grade fear responses. The prefrontal cortex (PFC) is an area comprising the approximately 5-7 cm most anterior part of the frontal lobes of the brain. This part of the brain is important for memory and selective attention, and determines a human’s ability for abstract thought, decision making, flexibility, social behavior, and personality. The medial PFC is connected to the hippocampus, a limbic area in the medial temporal lobe of the brain, which has long been associated with learning and memory. The H-PFC pathway appears to be particularly sensitive to stress, and its dysfunction may underlie the common symptoms of cognitive impairment and emotional dysregulation seen in several neurological conditions. For example, cognitive dysfunction in Alzheimer’s disease has been suggested to result from a dysfunctional H-PFC pathway. The H-PFC pathway is important for the transfer of information originating in the hippocampus to the medial PFC. There are several general functions in which the H-PFC pathway plays a role: i) contextual regulation of fear, ii) recognition memory involving spatial and temporal context, iii) goal-oriented reward learning, and iv) working memory. Working memory is a fundamental part of cognition that involves the temporary storage of information allowing planning and completion of complex and goal-oriented tasks. A well-functioning PFC is important for memory consolidation and storage. As people age, PFC function may become gradually impaired and H-PFC pathway hypoactivity may be linked to impaired memory consolidation and also in adequate executive function. 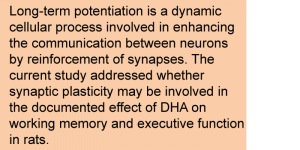 The H-PFC pathway is also important for controlling the input from the amygdala, a key brain area that organizes motor and autonomic defence responses. The amygdala directly projects onto both the hippocampus and the PFC, while also receiving input from these areas. The hippocampus and amygdala form part of the so-called limbic system, a collection of specialized structures involved in adaptive responses and emotional stability. The interaction between the amygdala and PFC is central to fear extinction, which is the inhibition of fear when signals that typically are associated with danger are not present. Dysfunction of the H-PFC pathway over a prolonged period, as a result of an overactive amygdala output or damage to the H-PFC pathway itself, is believed to lead to reduced contextual control over thought processes. Much of the knowledge on neuronal circuits in the brain has been obtained from rodent models, and in particular the rat. Much less detail on the H-PFC pathway in humans is available because the detailed techniques used for tract tracing and biochemical studies on neuronal transmission are mostly invasive. Evidence for functional coupling of the hippocampus and PFC in humans has nevertheless been obtained, for example from the detection of so-called theta-oscillation coherence between signals originating in the medial temporal lobe (where the hippocampus is located) and the PFC during a memory recall task. Functional magnetic resonance has also provided evidence to support the existence of the H-PFC interaction in humans. The dynamic adaptation of neuronal connections which leads to strengthening or weakening of neuronal pathways involves a process called “synaptic plasticity”. This phenomenon depends on the regulation of the number and the strength of synaptic contacts. The cellular basis for reinforcement of neural circuits through a process called long-term potentiation (LTP) was discovered in a rabbit model of hippocampal stimulation. LTP is widely considered to be one of the main neural mechanisms by which memories are stored in the brain. By nature of its flexibility, LTP is fundamental to learning new tasks and reflects the creation of memory at a neuronal level. LTP can last from minutes to months, and involves different neurotransmitters and different neuronal cell types. Chronic stress in the H-PFC pathway (in animal models) can alter synaptic plasticity and memory, lead to atrophy of PFC neurons, loss of PFC processing, loss of flexibility in behavioral adaptation to changing environments, and decreased attentional control. The disruption of LTP in the H-PFC pathway following moderate stress is not irreversible, and antidepressants and glucocorticoid receptor antagonists have been shown to improve depressed H-PFC function. The neurons that project from the hippocampus to the prefrontal areas are principally  glutamatergic neurons that interact with principal pyramidal neurons and GABAergic interneurons in the PFC. Additional neurotransmitters are involved in regulating the H-PFC pathway, including dopamine, serotonin, noradrenaline and acetylcholine. Previous studies in rats have identified NMDA (N-methyl-D-aspartic acid) receptors as the major type of glutamate receptors involved in synaptic plasticity in the hippocampus. Interestingly, the omega-3 long-chain polyunsaturated fatty acid (LCPUFA) docosahexaenoic acid (DHA) is also important for memory in rats, and improved memory is related to the DHA content in the hippocampus and the cerebral cortex. DHA is needed for NMDA-mediated working memory in the rat hippocampus. Exactly how DHA is involved in memory formation has remained unknown. A recent study has carried out a detailed investigation of the potential involvement of DHA metabolites in synaptic plasticity in the H-PFC pathway. The study was performed by Shalini and colleagues from the Department of Anatomy, the Department of Pharmacology, and the Neurobiology and Ageing Research Programme, at the National University of Singapore, and the Singapore University of Technology and Design, Singapore. The researchers focused their attention on enzymes that can metabolize DHA, 5-lipoxygenase, 12-lipoxygenase and 15-lipoxygenase (15-LOX), to form biologically active fatty acid derivatives. Of these three fatty acid oxygenases, 15-LOX had the highest gene expression in several areas of the brain cortex: i) the prefrontal cortex, ii) the primary and secondary motor cortex and the primary somatosensory cortex, combined and iii) the parietal association cortex and secondary auditory cortex, combined. Further analysis revealed that the expression in the PFC was highest of the brain areas studied, and ~23 times higher than in the cerebellum (used as reference tissue).

Expression of the 15-LOX protein was also highest in the PFC compared with other brain areas studied (~18 times than the cerebellum), and this was confirmed by immunohistochemistry. Using electron microscopic analysis, dense staining for the 15-LOX protein was found in dendrites was found, but not in axon terminals. By direct intracortical stereotaxic injection of an antisense oligonucleotide for the 15-LOX gene, its expression in the PFC could be nearly completely abrogated. Given the comparatively high expression of 15-LOX in the PFC, the researchers next studied whether DHA-derived products of this biosynthetic enzyme would be formed in this part of the brain. Resolvin D1 (RvD1), a DHA-derived oxygenated lipid mediator that requires 15-LOX for its formation, was detected in PFC tissue. Although the tissue levels were not reported, RvD1 levels were nearly completely abrogated by the antisense oligonucleotide-mediated knockdown. Pretreatment of the rats with a chemical inhibitor of the enzyme (PF146176), injected intracortically, also significantly reduced the levels of RvD1, although the effect was not very efficient. The functional relevance of 15-LOX for neuroplasticity in the H-PFC pathway was assessed by electrophysiological measurements on anesthetized rats. Extracellular voltage changes, called field excitatory postsynaptic potentials (fEPSP), can be recorded from groups of PFC neurons which are activated (depolarized) upon stimulation coming from the H-PFC pathway. The depolarization is caused by the inflow of positively charged ions into the postsynaptic neurons. High-frequency stimulation (HFS) in the hippocampus induced an electrical signal in the PFC, measured with a recording electrode in the medial PFC. This recording had a latency which is characteristic of the monosynaptic pathway between the hippocampus and the PFC. Five-minute averaged recordings showed that fEPSP in the PFC increased by ~50% following HFS (compared to baseline stimulation), and remained stable during a 90-minute period. This relatively long-lasting LTP response was completely abrogated by pretreatment of rats with the 15-LOX inhibitor or the antisense oligonucleotide. A scrambled control oligonucleotide used as a negative control did not modify the fEPSP signal, nor the baseline signal.

To determine if the enzymatic conversion of DHA into a LTP-promoting substance also had a role in a behavioral outcome that is known to involve the H-PFC pathway, the researchers exposed rats to an alternation task. Rrats were placed in a so-called “T-maze”, in which the animal can choose between one of two arms to locate food placed at the end of only one arm. In this rewarded behavioural task, rats were rewarded only if they alternated the arm search, to find the food. After habituating rats to the experimental setup for 5 consecutive days, the rats’ responses were measured during 3 consecutive test days. Rats that received the 15-LOX inhibitor one day before testing made only about 40% correct choices on day 1 compared to vehicle-treated rats. On days 2 and 3 the response rate had returned to normal. Rats that had received the antisense oligonucleotide, displayed a significant impairment in the alternation task on day 2 and 3 (up to 40% reduction), compared to rats that received the control oligonucleotide. The delayed impairment in this case is likely due to the time it needs for the oligonucleotide to become effective in inducing a net reduction in 15-LOX expression, whereas the effect of the chemical inhibitor wears off as it is metabolized and/or cleared from the PFC. The results of this study suggest that DHA can regulate synaptic plasticity in the PFC after stimuli originating in the hippocampus. This requires the enzymatic conversion of DHA by 15-LOX into specific products, such as RvD1, that activate LTP in the cortex. This aspect of DHA availability appears to underlie working memory in rats and may constitute a fundamental mechanistic aspect of cognition. There is scope for additional studies, for example to define which specific lipid mediators are most important and if results seen in the H-PFC pathway may be relevant in other brain circuits. This study did not show if other DHA-derived 15-LOX LTP-promoting substances other than RvD1 were formed, or whether other LCPUFA were substrates for 15-LOX and formation of other relevant metabolites in the PFC. 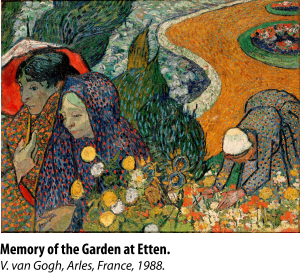