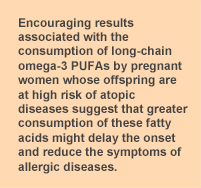 There are many plausible reasons to think that increased consumption of long-chain omega-3 PUFAs (n-3 LC-PUFAs) during pregnancy or infancy may reduce the development of atopic allergic diseases, such as eczema, wheeze and rhinitis. These allergies in infants and children are characterized by the increased production of immunoglobulin E (IgE), a class of antibody capable of triggering strong inflammatory responses. Several randomized trials have reported reduced severity of atopic conditions in infants whose mothers consumed fish oil or fish during pregnancy, although results have been inconsistent. Increased consumption of n-3 LC-PUFAs is not associated with a lower occurrence of atopic diseases, however. The well known anti-inflammatory properties of n-3 LC-PUFAs and their relatively low consumption in a background diet high in omega-6 (n-6) PUFAs typical of most Western diets suggest that greater intakes of n-3 LC-PUFAs, especially during pregnancy, might reduce the development of atopic diseases in infants and children. The use and effectiveness of n-3 LC-PUFAs in the treatment of several chronic inflammatory diseases, including rheumatoid arthritis and chronic inflammatory airway disease bolster the reasons for continuing to explore n-3 LC-PUFAs in allergic diseases. A detailed review of the various mechanisms by which n-3 LC-PUFAs and their derivatives moderate inflammatory diseases has been published recently. An extension of previous research on maternal n-3 LC-PUFA supplementation, mainly as DHA, in pregnancy and the development of IgE-mediated allergic disease was reported by Debbie Palmer and colleagues at the Universities of Western Australia and Adelaide. Children whose mothers had been randomized to consume capsules containing 800 mg DHA plus 100 mg EPA or vegetable oil for the last half of pregnancy were monitored for the occurrence of IgE-associated eczema or atopic eczema and other atopic diseases at 1 and 3 years of age. 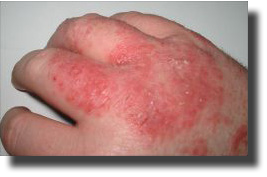 Toddlers in the study all had a parent or sibling with medically diagnosed allergic diseases. The researchers defined eczema according to medical review or a history of an itchy rash with a chronic or fluctuating course (Illustration). Association with IgE was determined by skin prick sensitization to at least one of the tested allergens (whole hens’ egg, cows’ milk, wheat, tuna and peanut) and several aeroallergens (ryegrass, cat hair, mold, house dust mite and others). In this report, the same allergens were tested when the children were 3 years of age, with the addition of cashew nut, sesame seed and another species of house dust mite. Lack of availability of the cows’ milk allergen resulted in the removal of this allergen from testing. A skin rash within 60 minutes of ingesting a food, with or without respiratory, gastrointestinal or cardiovascular symptoms, was used to determine IgE-associated food allergy. Asthma included 3 or more episodes of wheeze less than 6 weeks apart or daily use of asthma medication. The investigators defined allergic rhinitis as a history of sneezing or a runny/blocked nose accompanied by itchy-watery eyes in the absence of an upper respiratory tract infection. Originally, 706 children were recruited for the study, of whom 587 were available for a skin prick test and medical review at 3 years of age. Of the children whose mothers consumed DHA in pregnancy, 17.3% were diagnosed with IgE-mediated allergic diseases compared with 22.6% in the control group. However, this difference did not reach statistical significance (P=0.11). Eczema was the most common allergic disease, affecting 16.3% of the children. The difference in eczema between the two groups, 13.8 vs 19.0% in the DHA and control groups, respectively, was not statistically significant (P=0.10). For the entire 3-year period, 4.6% of the children were diagnosed with at least one IgE-mediated food allergy, with egg being the most frequent allergy. There were no differences between the groups in the occurrence of food allergies, respiratory disease or rhinitis. Compared with the diagnosis of allergic eczema at 1 year of age, more children received this diagnosis at age 3, 13.0 vs 9.2%, for ages 3 and 1 years, respectively. At both ages, the groups did not differ in the rate of sensitization to at least one allergen. These findings contrast with a recent report of an inverse relationship between cord blood and maternal plasma n-3 LC-PUFAs and the incidence of atopic eczema in 14-month-old Spanish infants. 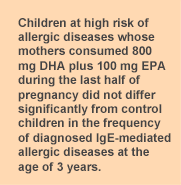 Interestingly, the pattern of allergic sensitization changed dramatically over the 3-year period. In the first year of life, the predominant allergens were egg, peanut and cat hair, but at 3 years of age, sensitization to these allergens decreased significantly (except for cat hair), while sensitization to airborne allergens such as mold, ryegrass pollen, house dust mite and cat hair was significantly higher. Findings from this follow-up study confirm the earlier results from these children and suggest that 800 mg of DHA supplementation during pregnancy was not associated with significantly reduced occurrence of IgE-mediated allergic disease at the age of 3. At both 1 and 3 years of age, the difference in the occurrence of IgE-mediated allergic diseases between the DHA-treated and control groups was 5%, which was not statistically significant. From a public health perspective, this reduction in disease might affect large numbers of families and could have practical value. The investigators also reported a large shift in the pattern of allergic sensitivity away from food sensitivities toward airborne allergens from 1 to 3 years of age. Although these results in young children seem clear, other reports in adults with immune-based inflammatory diseases, such as rheumatoid arthritis, have demonstrated clinical benefits and reduced use of nonsteroidal anti-inflammatory drugs with large doses of n-3 LC-PUFAs. In other inflammatory diseases, such as inflammatory bowel disease, n-3 LC-PUFAs have not shown similar benefits. The particular allergic disease, dose and duration of n-3 LC-PUFA treatment, host factors and possibly differences between EPA and DHA in various allergic diseases might all contribute to these observations. One also hopes that the emergence of specific genetic determinants of allergic diseases might provide additional insights into the hereditary component of these conditions. “Why” questions will continue. Palmer DJ, Sullivan T, Gold MS, Prescott SL, Heddle R, Gibson RA, Makrides M. Randomized controlled trial of fish oil supplementation in pregnancy on childhood allergies. Allergy 2013;68:1370-1376. [PubMed] Worth Noting Montes R, Chisaguano AM, Castellote AI, Morales E, Sunyer J, López-Sabater MC. Fatty-acid composition of maternal and umbilical cord plasma and early childhood atopic eczema in a Spanish cohort, published in the Eur J Clin Nutr 2013;67:658-663. [PubMed] Magnusson J, Kull I, Rosenlund H, Håkansson N, Wolk A, Melén E, Wickman M, Bergström A. Fish consumption in infancy and development of allergic disease up to age 12 y. Am J Clin Nutr 2013;97:1324-1330. [PubMed] Open Access Miles EA, Calder PC. Omega-6 and omega-3 polyunsaturated fatty acids and allergic diseases in infancy and childhood [Review]. Curr Pharm Des 2014;20:946-953.