Posted by pufa | December 17, 2013
Brain & Central Nervous System, Clinical Conditions
Clifford Woolf, professor of neurology at Harvard Medical School, Boston, once described pain as being “like love, all consuming” and “when you have it, not much else matters.” Shorn of its poetry, the International Association for the Study of Pain writes that pain is “an unpleasant sensory and emotional experience associated with actual or potential tissue damage.” Most pain is transitory and resolves itself once the stimulus is withdrawn and healing is complete. Chronic pain persists even after tissues have apparently healed. Three types of pain are commonly recognized: nociceptive, which involves peripheral nerve fibers; inflammatory, involving tissue damage and immune cell infiltration; and pathological, which includes neuropathic pain and dysfunctional pain such as fibromyalgia and tension headache. 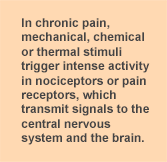 In chronic pain, mechanical, chemical or thermal stimuli trigger intense activity in nociceptors or pain receptors, which transmit signals to the central nervous system. The underlying mechanisms involved in pain differ with the tissue and type of pain. For example, prostaglandin E2 (PGE2) induces migraine-like pain in patients subject to migraine headache and may be involved in chronic headache. Inflammatory responses generate heat, which can lead to pain. Oxidized linoleic acid generated from cell injury produces metabolites that increase the sensitivity to heat and have been linked to several pathological conditions. Other fatty acid-related substances, such as n-3 epoxy-fatty acids, anandamide and resolvins E1 and D1 are reported to have analgesic or anti-nociceptive properties. The autonomic nervous system is involved in pain, itch, muscle ache and other sensory experiences. It has also been reported that individuals with primary vascular dysregulation syndrome, a disorder of blood flow regulation, may be more sensitive to pain and are more likely to suffer migraine than those without the condition, as recently reviewed here. Long-chain (LC) omega-6 (n-6) and omega-3 (n-3) PUFAs are connected to pain responses through several bioactive lipid mediators derived from them, including prostaglandins, leukotrienes, resolvins and maresins. The anti-inflammatory and analgesic effects of n-3 LC-PUFAs have been used in several immune diseases, such as rheumatoid arthritis. When PGE2 was infused into 12 patients who suffer migraine headaches, 75% of them experienced migraine-like attacks. In healthy volunteers prostaglandin or prostacyclin infusion also induced headache in all participants. In contrast, lipoxin A4 prevented the development of neuropathic pain in an animal model of nerve injury. Unlike the stimulatory effects of prostaglandins, anandamide, a cannabinoid neurotransmitter and arachidonic acid derivative, had significant analgesic effects in animals with nitroglycerin-induced hyperalgesia (increased pain sensitivity). Earlier studies had reported that patients with chronic migraine had significantly lower levels of anandamide in cerebral spinal fluid compared with healthy controls, suggesting that the endocannabinoid system is impaired in chronic migraine. The function of the endocannabinoid system in migraine was recently reviewed. 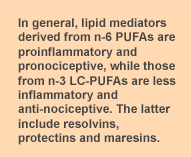 In general, the lipid mediators derived from the n-6 PUFA arachidonic acid are proinflammatory and pronociceptive, while those from n-3 LC-PUFAs are less inflammatory. DHA and EPA also give rise to resolvins, protectins and maresins that are anti-inflammatory, pro-resolving and pain-reducing, as reviewed from a clinical perspective recently. These distinctions suggest that dietary manipulations to reduce n-6 PUFAs and increase n-3 LC-PUFAs might contribute to the effective management of pain. To explore this possibility, Chris Ramsden and colleagues at the National Institutes of Health and collaborating institutions in the U.S. and Australia conducted a randomized, parallel-group trial in patients with chronic daily headache to compare the effects of a diet high in n-3 LC-PUFAs and low in linoleic acid with a diet only low in linoleic acid. The investigators examined headache-related clinical outcomes, red blood cell fatty acids and pro- and anti-nociceptive derivatives of these PUFA families. The primary outcome was headache hours per day. Sixty-seven participants were recruited who had headaches ≥ 4 hours per day for ≥ 15 days per month for at least 3 months and a headache history of ≥ 2 years under physician headache management. Participants with headaches secondary to head or neck trauma, cranial or cervical vascular disorder, substance use or withdrawal and certain other conditions were ineligible. A neurologist classified the type of headache as chronic migraine, chronic daily headache with migraine features or chronic daily headache without migraine. Approximately 87% of participants were female, with an average age of 42 years. After a 4-week run-in phase, participants were randomly allocated to consume either the low n-6 PUFA/high n-3 LC-PUFA diet or the low n-6 PUFA diet for 12 weeks. They were given specific dietary advice and foods according to their assigned treatment, but were unaware of the other group’s intervention. Diets were designed to provide equivalent energy and macronutrient intakes. Participants continued their usual care, but received intensive dietary counseling at randomization and 2-week intervals. Participants received 6 dietary recall interviews divided between the run-in and study periods.

The investigators calculated the total highly unsaturated fatty acids (HUFA, unsaturated fatty acids with ≥ 4 double bonds) in the red blood cells and the proportion of n-6 PUFA in the total HUFA, as well as the n-3 index, the sum of EPA and DHA. They measured anti-nociceptive mediators derived from EPA and DHA, 18R/S-HEPE and resolvin D2, respectively, and 3 pro-nociceptive mediators derived from linoleic and arachidonic acids (9- and 13R/S-HODE, 9- and 13R/S-oxo-ODE, and 5-, 8-, 9-, 11-, 12- and 15R/S-HETE). To assess headache-related disability, participants completed the Headache Impact Test (HIT-6) at randomization and on the final day of the 12-week intervention and completed a daily headache diary for the run-in and experimental periods to determine the number of headache days. The HIT-6 test covers six categories of the effects of headache. The investigators monitored the number and type of medications used at the beginning and end of the study. At 12 weeks, 56 participants (84%) completed the study, of whom 52 had chronic migraine or headache with migraine features. Both groups had significant improvements in all clinical outcomes (Table), but the improvements were significantly greater in those on the low n-6/high n-3 LC-PUFA diet. There were also significantly fewer patients on the low n-6/high n-3 LC-PUFA diet who used any pain-related acute or adjunctive medication at the end of the study compared with baseline. 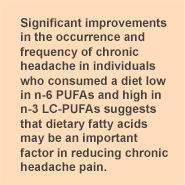 The low-n-6/high n-3 LC-PUFA diet was also associated with significant increases in the precursors of EPA- and DHA-derived resolvins, which have anti-nociceptive properties, and decreases in several pro-nociceptive eicosanoid derivatives of linoleic acid (e.g., HODEs) and arachidonic acid (e.g., HETEs). Interestingly, the low n-6 PUFA diet was associated with lower levels of some pro-nociceptive derivative HETEs, even though their precursor levels did not change. This group also had increased anti-nociceptive precursors, which was probably related to the higher EPA and DHA levels observed in their red blood cells. The authors suggest that these changes might have resulted from reduced metabolic competition between n-6 and n-3 LC-PUFAs. The key finding from this study was the significant marked reduction in chronic headache pain, as observed in fewer headache hours per day, fewer headache days per month and clinically improved quality of life among chronic headache patients consuming a diet low in n-6 PUFA and high in n-3 LC-PUFAs. There were modest improvements in headache pain with the low n-6 PUFA diet (Table), but none were comparable to the changes with the combined dietary PUFA alterations. The combined dietary changes were also associated with a significant reduction in the consumption of acute and chronic pain medications and red blood cell arachidonic acid concentrations. Changes in the concentrations of the PUFA-derived anti- and pro-nociceptive mediators, such as resolvins and prostaglandins suggest that these substances might contribute to the clinical improvements observed. More detailed studies could confirm and extend these observations. The question of whether a reduction in n-6 PUFA intake is required to achieve clinical improvements in headache pain cannot be fully answered. However, the only large study to examine the effect of n-3 LC-PUFA supplementation in migraine sufferers reported no difference in the mean number of attacks during the last 4 weeks of a 16-week treatment period and a small but significant reduction in the total number of migraine attacks during the entire study. Comparison with the current study suggests that the reduction in n-6 PUFA consumption contributed to the differences in outcomes in the two studies, but more data would be needed to answer this question and assess the effectiveness of n-3 LC-PUFA supplementation.   Ramsden CE, Faurot KR, Zamora D, Suchindran CM, Macintosh BA, Gaylord S, Ringel A, Hibbeln JR, Feldstein AE, Mori TA, Barden A, Lynch C, Coble R, Mas E, Palsson O, Barrow DA, Douglas Mann J. Targeted alteration of dietary n-3 and n-6 fatty acids for the treatment of chronic headaches: a randomized trial. Pain 2013;154:2441-2451. [PubMed] Worth Noting Juárez-López C, Klünder-Klünder M, Madrigal-Azcárate A, Flores-Huerta S. Omega-3 polyunsaturated fatty acids reduce insulin resistance and triglycerides in obese children and adolescents. Pediatr Diabetes 2013;14:377-383. [PubMed] Yip PK, Pizzasegola C, Gladman S, Biggio ML, Marino M, Jayasinghe M, Ullah F, Dyall SC, Malaspina A, Bendotti C, Michael-Titus A. The omega-3 fatty acid eicosapentaenoic acid accelerates disease progression in a model of amyotrophic lateral sclerosis. PLoS One 2013;8:e61626. [PubMed] Open Access Lana Lai YH, Petrone AB, Pankow JS, Arnett DK, North KE, Ellison RC, Hunt SC, Djoussé L. Association of dietary omega-3 fatty acids with prevalence of metabolic syndrome: The National Heart, Lung, and Blood Institute Family Heart Study. Clin Nutr 2013;32:966-969. [PubMed]