Do Preterm Infants Get Too Much Linoleic Acid and Too Little DHA in Breast Milk? 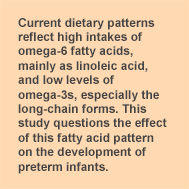 Preterm infants are at risk for medical complications, poorer developmental outcomes and nutrient shortages for several reasons. One is their early birth deprives them of the transfer of long-chain fatty acids from the mother that occurs mainly in the last trimester. Another is that their lack of body fat means they have no appreciable nutrient stores to see them through their early days. Finally, preterm infants are totally dependent upon breast milk or preterm infant formula to meet all their nutrient needs. Of particular importance is the preterm infant’s lack of long-chain fatty acids, namely arachidonic acid (ARA) and DHA that are needed for brain growth and development of the retina, blood vessels and other organs. These fatty acids are especially important in the first 4 months after birth when they are still rapidly accumulating. Breast milk contains these fatty acids, but mothers who have had low intakes of fish or DHA, as is typical in Western diets, may have low DHA levels in their milk. ARA levels are usually adequately maintained. Typically, the breast milk of women eating Western foods is high in linoleic acid, the main polyunsaturated fatty acid (PUFA) found in most vegetable oils and many processed foods. Evidence suggests that high levels of linoleic acid, especially in the presence of low levels of ARA, EPA and DHA are associated with poorer early development in these infants. A new study took a close look at this issue. 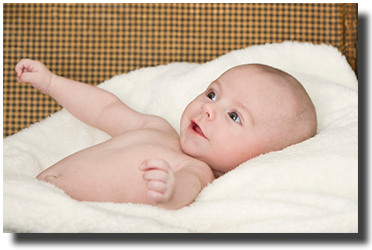 Researchers in Sweden evaluated several developmental outcomes in a group of preterm infants who were born at approximately 34 weeks’ gestational age. Full term is considered 38 to 40 weeks. All infants were breastfed or received human milk from a milk bank exclusively for about 3 months. The investigators assessed early development at 3 months of age using a test that evaluates the quality of the infant’s general movements. This evaluation is able to detect mild to distinctly abnormal developmental disorders as early as 2 to 4 months post term age. Later development at 6 months of age and older was assessed using standard Bayley’s developmental scales. The investigators measured the fatty acids in each mother’s breast milk and calculated an index of essential fatty acid deficiency, which depends on the presence of a fatty acid not usually present in appreciable amounts. With this index, they could relate the relative deficiency of long-chain fatty acids to the infants’ early and later developmental assessments. 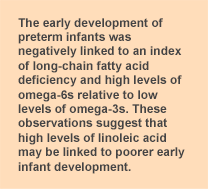 At 3 months of age, corrected for preterm birth, the quality of the infants’ general movements was negatively associated with the essential fatty acid index of breast milk fatty acids. In other words, the higher the deficiency index, the poorer the quality of movements. A similar relationship was observed between the Bayley scores for mental and motor function and the ratio of omega-6 PUFAs to omega-3 PUFAs. That is, the higher the omega-6 PUFA level, the lower the Bayley’s scores. The main omega-6 PUFA in breast milk is linoleic acid. These observations suggest, but do not prove, that high concentrations of linoleic acid in the presence of low concentrations of omega-3s may be linked to poorer early development in preterm infants. 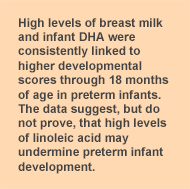