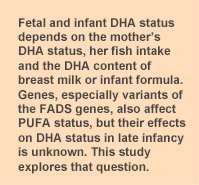 The importance of long-chain (LC) PUFAs in pregnancy and early infancy is well recognized. The mother’s dietary intake largely determines her tissue stores and the concentration of these fatty acids in her breast milk. Maternal transfer during the last trimester of pregnancy and breastfeeding ensure that the infant obtains the necessary LC-PUFAs for growth, brain structure and development. Maternal diet, specifically fish intake or supplementation with omega-3 (n-3) LC-PUFAs, is the key to providing adequate amounts of n-3 LC-PUFAs for the infant. The other possible source of n-3 LC-PUFAs for the infant is maternal conversion of the plant-based precursor of n-3 LC-PUFAs, alpha-linolenic acid (ALA). However, conversion of ALA to n-3 LC-PUFAs is highly inefficient and is further undermined by high intakes of linoleic acid with which it competes for enzyme processing. Although women may be better able to convert ALA to n-3 LC-PUFAs than men, relying on such conversion to provide sufficient DHA for the infant is unlikely to meet the infant’s needs. For this and other reasons, women should consume at least 200 mg per day of preformed DHA during pregnancy and lactation.

Genotype has emerged as another factor affecting plasma and red blood cell LC-PUFA concentrations, with the FADS gene cluster having the  strongest association with plasma levels. These genes encode enzymes involved in fatty acid desaturation, critical steps in the conversion of linoleic acid and ALA to their LC-PUFA derivatives. A large study of FADS gene variants and red blood cell fatty acids in pregnant women reported significant associations between minor alleles in the FADS1 and FADS2 gene cluster and higher levels of 18- and 20-carbon PUFA precursor fatty acids and decreased amounts of the desaturation products, such as arachidonic acid and DHA. There is evidence that women who are homozygous for certain variants of the FADS1 and FADS2 genes have lower levels of DHA in their breast milk, which are not compensated by increased fish or fish oil consumption. FADS genotype may also affect other health outcomes such as asthma and the interactions between PUFAs and cholesterol. Moreover, these gene variants may occur in 11 to 40% of the population. Thus, the effects of the minor alleles of the FADS genotype on DHA levels in pregnant women and their infants warrant further investigation. To that end, Laurine Harsløf and colleagues and the University of Copenhagen and the Technical University of Denmark examined the association between several factors that affect an infant’s DHA status, particularly in pregnancy, and the infant’s actual DHA status at 9 months of age. Families with infants 7 to 8 months of age were recruited from the National Danish Civil Registry and volunteers were eligible if their infants were healthy singletons born after 37 weeks’ gestation, free of chronic diseases that could influence growth or food intake and had not been given fish oil supplements. Data were obtained from 409 infants and parents at enrolment and 9 months of age. For comparison, an additional sample of 176 children 3 years-of-age was recruited from a similar cohort. 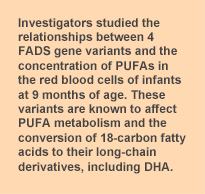 The parents provided demographic information, frequency of maternal fish consumption in pregnancy, current infant formula and the infant’s average food intake from 7-day food diaries completed before the clinical examination of the infants. The investigators collected data on anthropometry in the infants and children and obtained a blood sample for fatty acid analysis and genotyping. They selected 4 single nucleotide polymorphisms (SNP) based on previous reports of associations with PUFAs in red blood cells and their identity in the International HapMap data for European ancestry. These were: rs1535, rs174575, rs174448 and rs3834458. The SNPs rs1535 and rs174575 are associated with the FADS2 gene and the other two with intergene regions. The analysis was adjusted for birth weight, breastfeeding status at 9 months, total duration of breastfeeding and maternal fish intake plus homozygosity for the major allele (M/M) heterozygosity for the minor allele (M/m) and homozygosity for the minor allele (m/m) for each SNP being analyzed.

The frequency of occurrence for the minor alleles varied from 21.3 to 30.7% and all were in Hardy-Weinberg equilibrium, meaning that the alleles were observed at their expected frequency. The selected determinants of red blood cell DHA status explained 26.5% of the overall variation in DHA status. The variables associated with higher DHA status were birthweight, breastfeeding at 9 months, longer breastfeeding, maternal fish intake and presence of SNP rs1535. This SNP had previously been associated with higher linoleic acid and ALA, but lower n-3 and n-6 LC-PUFAs in maternal red blood cells and in cord plasma. The most important positive variables were total duration of breastfeeding and breastfeeding at 9 months and these accounted for about 20% of the variability in DHA status. FADS genotype accounted for approximately 3% of the variability. This observation confirms a previous report that minor alleles in the FADS genotype account for less than 3% of the variability in blood PUFAs, including DHA. The infant’s own fish intake was also associated with an increase in red blood cell DHA of approximately 1.1% fatty acid for a median intake of one fish meal per week compared with no fish intake. In contrast to SNP rs1535, SNPs rs174448 and rs174575 were associated with lower DHA status, as were male sex and multiparity. SNP3834458 was removed from multiple regression analysis because of its strong link to rs1535. The observed associations were significant only when the analysis was adjusted for other SNPs. Male infants tended to have lower DHA status than females. Similar negative associations were reported for rs174448 and rs174575 and DHA status in two separate studies. In a study of 17 SNPs from the FADS gene cluster, 15 SNPs were positively associated with linoleic acid and ALA, but negatively associated with DHA. 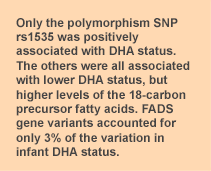 In summary, the most important determinants of DHA status in 9-month-old infants were total duration of breastfeeding and breastfeeding at 9 months, the child's fish intake and FADS genotype. The effects of selected FADS gene SNPs were observed in opposite directions, having positive associations with the 18-carbon precursors of n-3 and n-6 LC-PUFAs, but negative associations with DHA. Associations with arachidonic acid status were also negative, but were significant for fewer SNPs than for DHA. The finding that rs1535 was associated with higher DHA status at 9 months contrasted with another report of lower DHA status in maternal and offspring cord blood and the offspring at 7 years of age in association with rs1535. Longer breastfeeding remained by far the most important determinant of DHA status in late infancy.   Harsløf LBS, Larsen LH, Ritz C, Hellgren LI, Michaelsen KF, Vogel U, Lauritzen L. FADS genotype and diet are important determinants of DHA status: a cross-sectional study in Danish infants. Am J Clin Nutr 2013;97:1403-1410. [PubMed] Open Access