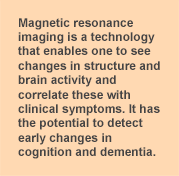 DHA is critical to the development of brain structure and function, neurotrophic factor expression, neurogenesis, neurite outgrowth, synaptogenesis and plasticity and other aspects of a healthy brain. Studies suggest that infants whose mothers have higher DHA status have improved cognition and attention. Further, the occurrence of behavioral and psychiatric disorders has been associated with lower concentrations of n-3 LC-PUFAs in plasma and erythrocytes. Treatment of various psychiatric and behavioral disorders with DHA or n-3 LC-PUFAs was linked to improved outcomes in some, but not all studies. However, fewer data are available on the relationship between psychopathology and brain or cortex DHA content, in part because of the limitations in assessing brain DHA in living individuals. One technique to overcome that difficulty is the use of various magnetic resonance imaging techniques, which can measure cortical gray and white matter volumes, cortical activation patterns and other aspects of cortical function 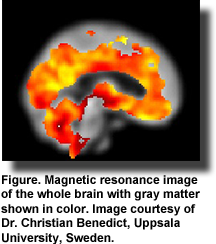 In healthy adults, corticolimbic gray matter volume in 3 specific regions of the brain, including the hippocampus, was associated with the consumption of n-3 LC-PUFAs (Figure). Higher intakes were linked to greater volumes. A meta-analysis of brain volume studies in patients with borderline personality disorder reported a modest reduction in the volumes of the amygdala and hippocampus in patients compared with controls. These changes may be useful markers of the condition. In major depressive disorder, patients with smaller hippocampal volumes had worse clinical outcomes compared with patients with large hippocampal volumes and previous depressive episodes. These studies and several others in patients with various psychiatric disorders suggest that regional brain volumes may be altered in clinical conditions and might serve as biomarkers of certain disorders or responses to treatment. 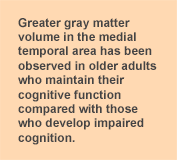 Cognition has also been linked to changes in regional brain volumes. For example, in 83-year-old adults free from dementia at baseline, changes in cognition were monitored over a 9-year period with a modified Mini Mental State Test. Magnetic resonance imaging measures of total brain, white matter hyperintensity and gray matter volumes and other brain region assessments were taken to evaluate the relationship between cognitive function and changes in brain volumes. The most important finding was a significantly greater retention of volume in the medial temporal area of participants who maintained their cognitive status compared with those whose cognition declined. Retention of the microstructure of the cingulate cortex was also associated with better cognitive function. Others have also recently reported significant correlations between imaging measures of gray matter volume and cognitive function.

Researchers have also reported changes in volumes in the whole brain, hippocampus and temporal horn that predict future conversion from mild cognitive impairment to Alzheimer’s disease. Others have observed a significant loss in volume in the anteromedial temporal lobe in normal individuals who subsequently developed cognitive complaints. Thus, there is a good rationale for investigating the associations between n-3 LC-PUFAs, brain volume and cognition.

In the study described here, Olga Titova and colleagues at Uppsala University, Sweden, evaluated the relationship between the consumption of EPA and DHA in cognitively healthy 70-year-old Swedish adults and their global cognitive function and brain volume measurements at age 75. Participants were part of a cohort of older adults from Uppsala, Sweden, recruited from the community for a study on vasculature and aging. Normal cognitive status was defined as a Mini Mental State exam score greater than 26 at baseline. The investigators assessed fatty acid intakes from a 7-day food diary obtained at baseline. They assessed changes in cognition using the 7-minute screen test, which includes 4 subtests. Data on food intake, magnetic resonance brain imaging and normal cognition were available for 252 individuals. Participants with strokes or neurologic diseases were excluded. 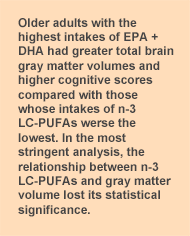 Subgroup analysis was performed on 198 individuals after the elimination of those with uncertain energy intakes. Brain volume was determined using a 3D T1-weighted volumetric (Turbo Field Echo) scan and processed using Voxel Based Morphometry. Participants were divided into quartiles by percentile of EPA + DHA consumption. Gray matter, white matter and total brain volumes were expressed as percentages of the total intracranial volume. 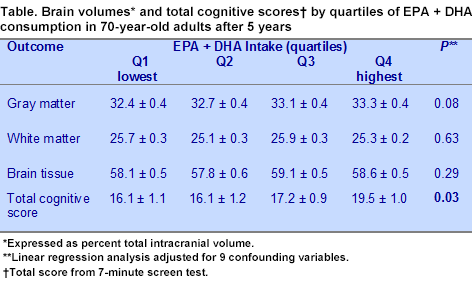 This study documents improved cognitive scores in older adults with higher intakes of EPA + DHA when cognition was evaluated 5 years after dietary assessment. There was a clear suggestion that gray matter volumes were also larger in those with higher n-3 LC-PUFA consumption, but with further adjustment for confounding variables, the association disappeared. These observations suggest that in 70-year-old adults without impaired cognition, high intakes of EPA + DHA may preserve cognitive function or delay the onset of its decline. These findings support other reports that supplementation with 900 mg of DHA for 24 weeks in healthy adults with mild age-related cognitive decline was associated with improved scores in tests of memory and learning. These observations also agree with those of Conklin and colleagues who reported that higher intakes of n-3 LC-PUFAs were associated with greater gray matter volume in the nodes of a corticolimbic circuitry in healthy middle-aged adults.

The evidence presented in the Titova study suggests, but falls short of confirming, that total gray matter volumes are higher in older adults who consume greater amounts of EPA + DHA. Thus, the associations among EPA + DHA consumption, gray matter volume and cognition, which might provide a more direct assessment of healthy brain function, await additional data. However, as the investigators did not report the gray matter volumes in specific regions of the brain related to cognition, such as the hippocampus and amygdala, these observations do not reveal whether specific regions might have been affected by n-3 LC-PUFA consumption. One might speculate that habitual consumption of n-3 LC-PUFAs in this fish-eating population might have contributed to long-term brain health and function, as suggested by the extensive involvement of n-3 LC-PUFAs in brain and neuronal structure and function.