Posted by pufa | September 30, 2016
Cardiovascular Health
This article at a glance   Polychlorinated biphenyls (PCBs) are a group of chemically stable and fat-soluble substances that share a biphenyl core substituted with a variable number of chlorine groups. PCBs were produced as mixtures of congeners (structural isomers) from the 1920s onwards by industrial chlorination of biphenyl, for use in paints, sealants, inks, as plasticizers, as coolants and lubricators in electrical equipment, and in a range of household and technical products. Following the recognition that PCBs were present in human tissues, and the noxious effects on human health and terrestrial ecotoxicology by environmental exposure to PCBs became increasingly clear, their industrial production was gradually halted from the end of the 1970s onwards, and banned internationally in 1991. Given their chemical stability and widespread use for a good part of the last century, PCBs still constitute ubiquitous environmental contaminants. Inadvertent formation still occurs today as by-products of paint and dye production. Airborne PCBs derived from materials used in older buildings constitute a current source of exposure.

Food intake is a major route of entry for persistent organic pollutants including PCBs, in particular foods of animal origin, given the bio-accumulating behavior of PCBs towards higher trophic levels. The consumption of fish contributes to a significant extent to the dietary burden of PCBs, in particular from fatty fish from contaminated waters. PCBs absorbed from food are metabolized at slow rates and accumulate in fatty tissues in humans. PCBs have very large volumes of distribution in humans, nearly completely dissolving in neutral lipids of the liver and in adipose tissue (which can constitute between 20 and 50% of the body weight of lean and obese persons, respectively). The metabolism and clearance of the many individual PCB congeners are incompletely understood. Even the hydroxylated and sulfated metabolites of those PCBs that are susceptible to metabolism (PCBs that are less chlorinated) are still of sufficiently high liposolubility that they will accumulate in tissues. PCBs can also appear in breast milk due to its elevated lipid content and thus can be transferred from mother to infant. Hair growth and loss may constitute an unusual route of elimination of chlorinated biphenyls. The fat solubility, chemical stability and low clearance of PCBs likely converts adipose fat into a depot tissue for maintaining very low but persistent levels in blood. Although the levels of PCBs in foods have declined in recent years, recommendations for limiting exposure to persistent environmental contaminants are challenging to make. PCBs are now recognized and classified as human carcinogens. The development of specific tumor types has been associated with the occupational exposure to PCBs, but it is hard to assign the carcinogenic effects of PCBs to their individual congeners. PCBs exert developmental toxicity, induce marked changes in immune competence and act as endocrine disrupting substances that mimic and interfere with the activity of thyroid and sex steroid hormones. Exposure studies in animals and in vitro studies have indicated that PCBs have measurable effects on the endothelium (cells lining blood vessels) and may have long term chronic effects that predispose to atherosclerotic lesions. Epidemiological evidence has suggested that PCB exposure is also associated with the development of atherosclerosis in humans. The results of a recently published prospective cohort trial suggest that long-chain omega-3 polyunsaturated fatty acids (omega-3 LCPUFA) ingested from marine sources may exert a marked influence on the risk for developing coronary disease associated with PCB exposure from dietary sources. The study was performed by Bergkvist and colleagues at the Institute of Environmental Medicine, Karolinska Institute, Stockholm, and the Risk and Benefit Assessment Department, National Food Agency, Uppsala, Sweden. The principal aim was to examine the suspected association of risk for myocardial infarction in adult men that were free from cardiovascular disease at baseline (1997) with dietary intake of PCBs over a period of approximately 12 years. In addition, the effects of dietary intake of EPA/DHA and adiposity on the association between PCB exposure and myocardial infarction risk were assessed. 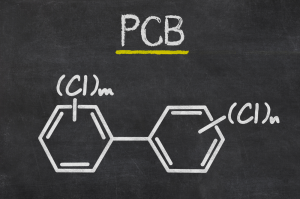 A total of 36,759 men were followed from 1998 up to the end of 2010 (censored observations), death, or the date of the first myocardial infarction. Dietary intake was assessed from a food-frequency questionnaire at baseline, which estimated the average food consumption over the past year. The dietary intake of PCBs, as well as of EPA/DHA, was calculated from a food items database, taking into account consumption frequency and age-specific portion sizes, and adjusted for total energy intake. As a proxy for dietary intake of PCBs, the researchers limited the calculation to that of the PCB congener CB-153, which is considered a good indicator of total PCB level in foods, as well as in serum, and is the most abundant PCB congener present in food in Sweden. Myocardial infarction was determined from the Swedish National Hospital Discharge register and the Cause of Death register, which have registered health indices for the past 100 years. The age range of the men at baseline was 45-79 years. The mean exposure to PCBs was calculated as 265 nanograms (ng) per day. The mean intake of EPA plus DHA was 460 milligrams (mg) per day, which is relatively high. The association between PCB exposure and primary outcome over the 12-year follow-up was evaluated after stratification of study participants by quintiles of PCB exposure (CB-153; lowest 113 ng/d, highest 436 ng/d). The intake of high fat fish, medium fat fish and low fat fish, and the average EPA/DHA intake, all increased as PCB exposure per quintile increased. There were no significant differences between the groups with respect to other factors such as family history of myocardial infarction, hypertension, aspirin use, physical activity, energy intake, or saturated fatty acid intake.

This study is of interest because it suggests that an inverse and protective activity may be associated with omega-3 LCUFA intake obtained from the same dietary source in which environmental contaminants such as PCBs are ingested. Limitations of the study include the challenge to accurately determine food intake from a food frequency questionnaire, and possible exposure misclassification. The validation study for PCB exposure was originally performed in women. Also, the collinearity between omega-3 LCPUFA intake and PCB exposure may introduce errors in the calculation of observed risks (as the covariates in Cox-regression modeling have a multiplicative (proportional) effect on the probability of the outcome variable). Positive aspects of the study are the nearly complete follow-up for a long time, and complete reporting of myocardial infarction. The results of this study show an association, and thus its generalizability needs to be confirmed in other populations. The mechanisms whereby omega-3 LCPUFA may mediate a potential protective effect on the development of atherosclerosis or myocardial infarction in this setting are unknown. The good correlation between omega-3 LCPUFA and PCBs may suggest that any protective effects associated with the dietary intake of fish are associated with the lipid component of fish. Assignment of associations to any specific PCB congeners or their biologically active metabolites cannot be made at this point, and other persistent environmental pollutants with suspected effects on cardiovascular disease may contribute to the observed risk. Given their persistent presence in our environment and bodies, a better understanding of the effects of environmental contaminants on human health, and of the factors that modulate their chronic toxicity, requires further studies.   Bergkvist C, Berglund M, Glynn A, Julin B, Wolk A, Åkesson A. Dietary exposure to polychlorinated biphenyls and risk of myocardial infarction in men - A population-based prospective cohort study. Environ. Int. 2016;88:9-14. [PubMed]   Worth Noting Agency for Toxic Substances & Disease Registry - PCBs: http://www.atsdr.cdc.gov/PHS/PHS.asp?id=139&tid=26 Ax E, Lampa E, Lind L, Salihovic S, van Bavel B, Cederholm T, Sjögren P, Lind PM. Circulating levels of environmental contaminants are associated with dietary patterns in older adults. Environ. Int. 2015;75:93-102. [PubMed] Crinnion WJ. Polychlorinated biphenyls: persistent pollutants with immunological, neurological, and endocrinological consequences. Altern. Med. Rev. 2011;16(1):5-13. [PubMed] Grimm FA, Hu D, Kania-Korwel I, Lehmler HJ, Ludewig G, Hornbuckle KC, Duffel MW, Bergman Å, Robertson LW. Metabolism and metabolites of polychlorinated biphenyls. Crit. Rev. Toxicol. 2015;45(3):245-272. [PubMed] Lauby-Secretan B, Loomis D, Baan R, El Ghissassi F, Bouvard V, Benbrahim-Tallaa L, Guha N, Grosse Y, Straif K. Use of mechanistic data in the IARC evaluations of the carcinogenicity of polychlorinated biphenyls and related compounds. Environ. Sci. Pollut. Res. Int. 2016;3:2220-2229. [PubMed] Lind PM, van Bavel B, Salihovic S, Lind L. Circulating levels of persistent organic pollutants (POPs) and carotid atherosclerosis in the elderly. Environ. Health Perspect. 2012;120(1):38-43. [PubMed] McKinney JD, Waller CL. Polychlorinated biphenyls as hormonally active structural analogues. Environ. Health Perspect. 1994;102(3):290-297. [PubMed] Nøst TH, Breivik K, Wania F, Rylander C, Odland JØ, Sandanger TM. Estimating time-varying PCB exposures using person-specific predictions to supplement measured values: A comparison of observed and predicted values in two cohorts of Norwegian women. Environ. Health Perspect. 2016;124(3):299-305. [PubMed] Polychlorinated biphenyls: https://www3.epa.gov/region9/pcbs/faq.html Ruder AM, Hein MJ, Hopf NB, Waters MA. Mortality among 24,865 workers exposed to polychlorinated biphenyls (PCBs) in three electrical capacitor manufacturing plants: a ten-year update. Int. J. Hyg. Environ. Health. 2014;217(2-3):176-187. [PubMed] Schardein JL, Keller KA. Potential human developmental toxicants and the role of animal testing in their identification and characterization. Crit. Rev. Toxicol. 1989;19(3):251-339. [PubMed]