Blood pressure is primarily determined by resistance vessels in healthy people. Chronically elevated blood pressure is often caused by decreased vascular patency (potential to dilate) of the arteries, leading to an increased vascular resistance that the heart has to work against. Localized changes in blood flow and chronically increased vascular pressure lead to hemodynamic injury of the endothelial cells lining the blood vessels, creating a sustained activation of these cells that favors their interaction with white blood cells as well as sub-endothelial fluid accumulation and early signs of inflammation. These initial events can ultimately lead to localized inflammation of the blood vessels and atheroma formation (vascular plaque formation that precedes atherosclerosis). 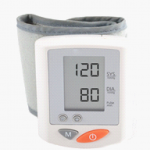 Although blood pressure increases with age, high blood pressure can be controlled through lifestyle changes such as modification of the diet, reduced alcohol consumption and increased physical activity, as well as by pharmacological treatment. A high need for sustainable and cost-effective interventions that can halt and reverse the rising prevalence of hypertension has been acknowledged. The intake of long chain omega-3s is now recognized as one option to reduce blood pressure. An average daily intake greater than or equal to 2 grams a day of EPA and DHA lowers both systolic and diastolic blood pressure in individuals with hypertension who do not receive anti-hypertensive drugs. The extent of blood pressure lowering is clinically meaningful, and at least as effective as other interventions such as sodium and alcohol restriction or physical exercise. The mechanisms whereby long chain omega-3s reduce blood pressure include improved functioning of the vascular endothelium leading to reduced vascular resistance, and a reduction in heart rate and improved filling of the heart. A recent study in mice showed that blood pressure-lowering by an omega-3-enriched diet depends to a large extent on the activation of nitric oxide-dependent vasodilation of resistance vessels.

Two recent studies provide new information on possible mechanisms how DHA and EPA contribute to blood pressure lowering. The first study by Ulu and colleagues from the University of California in Davis is an experimental exploratory study carried out in mice to identify new mediators derived from DHA that have hypotensive actions. The second study is from Schuchardt and colleagues at the Leibniz University and the University of Veterinary Medicine in Hannover, Germany, and researchers in the first study.

The study by Ulu et al. was undertaken as a result of earlier observations that a diet rich in EPA and DHA lowers systolic blood pressure in hypertensive mice. A diet rich in omega-6 PUFA does not offer this anti-hypertensive effect. This research group has long-standing experience in delineating the physiological role of an enzyme called soluble epoxide hydrolase (sEH) and inhibition of this enzyme was found to enhance the anti-hypertensive effect of the omega-3-enriched diet. The formation of a derivative of DHA called 19,20-epoxy-docosapentaenoic acid (19,20-EDP; Figure 1) accompanied the reduction in blood pressure. In the present study, the direct hypotensive action of 19,20-EDP was determined. 19,20-EDP was infused from a subcutaneously implanted minipump, and in order to reduce potential fast metabolic degradation, 19,20-EDP was also infused with an inhibitor of the sEH enzyme that breaks down 19.20-EDP. Angiotensin-II (Ang-II) was employed to induce hypertension, also administered subcutaneously. When determined over a 6-day period, administration of 19,20-EDP resulted in a significant reduction (approximately 30%) in Ang-II-increased systolic blood pressure. The hypertensive effect of Ang-II was further reduced to approximately half in the presence of the sEH inhibitor. 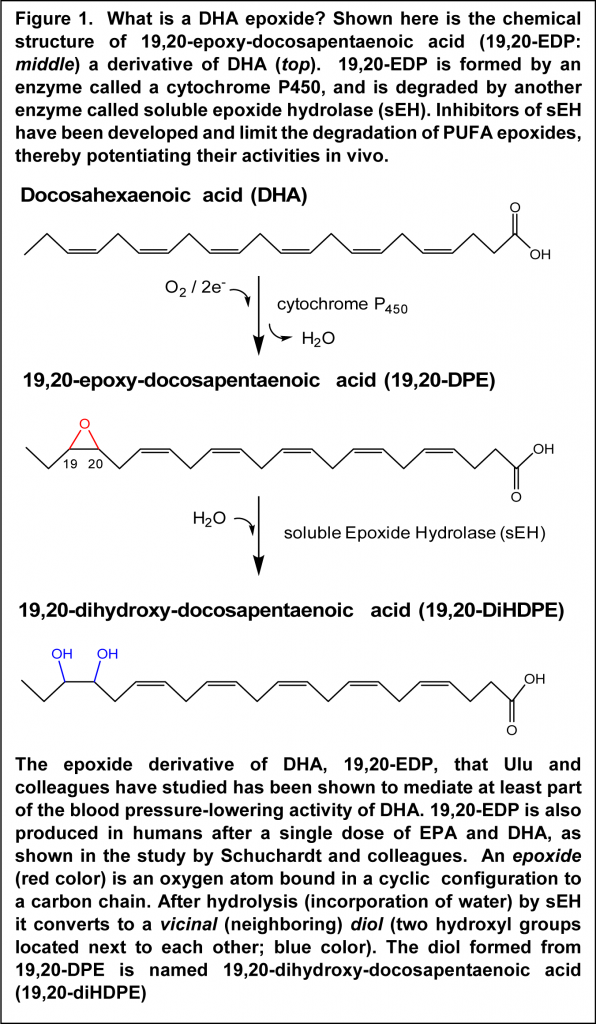 Measurement of 19,20-EDP in the circulation demonstrated that blood plasma levels were increased and stabilized by the sEH inhibitor. In the kidney, the inhibitor raised 19,20-EDP levels without the need for co-infusion of 19,20-EDP, pointing out that endogenous formation of 19,20-EDP in Ang-II-induced hypertension is already activated in the kidney and protected from metabolism when the inhibitor is present. A fatty acid epoxide is hydrolyzed by epoxide hydrolases to the corresponding diol, a substance that has two hydroxyl groups bound on neighboring carbon atoms (Figure 1). The expected diol derivative of 19,20-EDP was found in plasma, but not in plasma of those mice that had also received the sEH inhibitor. Of interest, mice treated with 19,20-EDP had decreased expression of the message for the receptor of Ang-II, AT1a, in kidney tissue, which correlated with the anti-hypertensive effect. These results suggest that 19,20-EDP may mediate part of the anti-hypertensive actions of DHA, not excluding additional mechanisms of action, such as formation of other mediators derived from DHA and EPA. Further studies will be required to demonstrate that specific epoxide derivatives of DHA and EPA are responsible for blood pressure-lowering activity in humans.

To obtain evidence for the formation of such derivatives in humans, Schuchardt and colleagues studied six healthy male volunteers that took an EPA/DHA supplement followed by measurement of the formation of the omega-3 PUFA epoxides. The participants were slightly overweight (average BMI of 25) and had a normal lipid profile. The study subjects avoided ingestion of foods rich in omega-3 PUFA during the preceding four weeks (no fish, seafood, or alpha-linolenic acid-rich vegetables) in order to minimize variability in long chain omega-3 PUFA status and blood levels. After an overnight fast they ingested four capsules of EPA and DHA in the form of re-esterified triglycerides amounting to a total dose of 1008 mg EPA and 672 mg DHA. The capsules were taken with a standardized breakfast with a defined energy content, as well as protein and lipid content. The subjects were followed for 48 hours, during which standardized meals were eaten at precise times. Blood samples were taken before supplementation and 6, 8, 24 and 48 hours after.

A significant increase in the level of EPA within plasma phospholipids was detected as early as six hours after taking the oral supplementation. Maximal levels were reached at eight hours, at which point the level had approximately doubled from baseline to nearly 2% of total fatty acids. In contrast no significant change in the plasma phospholipid level of DHA was observed.

Various classes of derivatives of EPA, DHA and arachidonic acid were measured in EDTA plasma samples, such as mono-hydroxylated derivatives (containing a single hydroxyl group), di-hydroxylated derivatives, as well as the derivatives containing an epoxide group. Individual members of each of these broad compound classifications have been shown to possess biological activity, e.g. in the regulation of inflammation and blood pressure. The authors focused on a sub-group of lipid mediators that are primarily formed through the action of several enzymes called cytochrome P450. Specific cytochrome P450 enzymes have been shown to readily oxygenate EPA and DHA even more efficiently than arachidonic acid when presented to the enzyme. All lipid mediators were prepared for analysis by means of alkaline hydrolysis to release any plasma lipid-bound mediators. 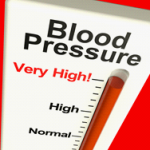 The study reveals that a number of lipid mediators derived from EPA were present in plasma at increased concentrations six hours after supplementation. These included several epoxide derivatives of EPA, as well as the corresponding vicinal diols. Whereas no measurable change in the level of the DHA-derived lipid mediator 19,20-DPE was found in plasma, supplementation led to a 25% increase in the level of the corresponding diol 19,20-diHEPE at eight hours. The results suggest that the potentially anti-hypertensive DHA derivative 19,20-DPE is generated upon supplementation with DHA, but that rapid metabolism by sEH (Figure 1) metabolizes the substance to the diol. The results also indicate that EPA undergoes significantly more extensive conversion than DHA to epoxide-containing lipid mediators measurable in plasma, or that the EPA-epoxides are more resistant to further metabolism, after a single dosing in adults.

The two studies together provide new insight into the plausible mechanisms whereby the anti-hypertensive actions of EPA and DHA are mediated. The fact that basal levels of 19,20-DPE are detectable in the circulation, and that small increases in formation may occur after a single oral dose of DHA in human volunteers, suggests that different pools of epoxygenated lipid mediators are present in plasma, and that supplementation may transiently increase the level in one pool. It will be interesting to see future studies in normotensive and hypertensive people in which different blood cells and specific lipids are measured for their content and changes in 19,20-DPE and other epoxygenated derivatives of EPA and DHA upon supplementation.