Posted by pufa | April 29, 2016
Cardiovascular Health
This article at a glance   An elevated plasma low-density lipoprotein (LDL) level is associated with an increased risk of cardiovascular disease. Decades of research and pharmaceutical development have been dedicated to achieving the lowering of the cholesterol content associated with LDL, in the primary and secondary prevention of atherosclerotic cardiovascular disease. Recent efforts to develop LDL-lowering prescription drugs have focused on a new target, PCSK9, or proprotein convertase subtilisin/kexin type 9. PCSK9 is a secreted glycoprotein that regulates the membrane expression of the LDL receptor. This receptor is found within the membranes of cells facing the circulation, and promotes the endocytotic internalization and uptake of LDL lipid cargo into tissues. PCSK9 binds to the LDL receptor and hinders its recycling to the cell surface, decreasing the LDL receptor density available for removal of LDL from the circulation. Therefore, inhibition of PCSK9, or reduction of its levels, leads to a decrease in circulating LDL level by increasing LDL-receptor-mediated LDL clearance. People with loss-of-function mutations in PCSK9 have lower LDL levels and a markedly lower incidence of coronary heart disease. The reverse situation is also recognized: people with gain-of-function PCSK9 mutations have a marked increase in blood cholesterol levels and an increased coronary heart disease incidence.

LDL levels provide an indication of the excess energy obtained from dietary intake that has been converted to fatty acids and cholesterol by the liver. Cholesterol and fatty acids (as triglycerides) are exported from the liver as VLDL, to distribute triglycerides and cholesterol-fatty acid esters to all peripheral tissues that require these lipids for membrane synthesis, or for storage in the adipose tissue, with the resulting LDL particles being taken up again mainly by the liver. However, in a context of concurrent chronic low-grade vascular inflammation, commonly resulting from a poor diet and a sedentary lifestyle, a sustained oxidative modification of the protein and lipid components that constitute LDL particles can cause the misdirection of LDL lipids into atheromatous sub-endothelial deposits via monocyte/macrophage-mediated retention. Over the course of a decades-long progression of vascular disease, this LDL-associated process is interlinked with pro-inflammatory vascular tissue remodeling and the formation of atherosclerotic lesions. 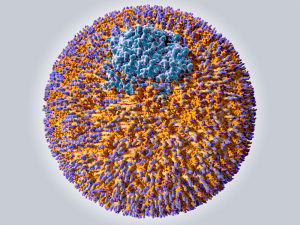 Although PCSK9 inhibition has been primarily considered as a promising drug target, its modulation by changes in dietary and lifestyle habits, and the physiological effects of these has been addressed to a very limited extent only. A recent study by Graversen and colleagues at the Department of Cardiology at Aalborg University, Denmark, has carried out a first careful evaluation of the effect of supplemental omega-3 LCPUFA intake on circulating PCSK9 levels in healthy Danish women (age 18 to 70 years). Half of the women were premenopausal (n=46), the other half postmenopausal (n=44). The study is a follow-up analysis of an earlier randomized, controlled, double-blinded study in which the influence of menopause on the distribution of omega-3 LCPUFA into platelets and adipose tissue was addressed. That study had demonstrated that in premenopausal women estrogen levels increased in response to omega-3 LCPUFA intake (2.2 g of omega-3 LCPUFA from fish oil, compared to control oil, daily for 12 weeks). The incorporation of eicosapentaenoic acid (EPA), docosahexaenoic acid (DHA) and docosapentaenoic acid (DPA) into platelet membranes and adipose tissue was nearly identical in premenopausal compared to postmenopausal women supplemented with fish oil. No marked changes in fatty acid levels were found in the control groups.

Plasma PCSK9 levels were determined by ELISA in pre- and post-menopausal women supplemented with either fish oil or control oil (thistle oil) at baseline and after 12 weeks. Supplementation with fish oil induced a modest decrease in plasma PCSK9 levels that was similar in both pre- and postmenopausal women (a decrease of 29 ng/ml from baseline values of 255 and 286 ng/ml, respectively). In controls, the PCSK9 level did not change over the 12-week intervention period. The authors note that lowering of LDL level was not observed as a result of the interventions. This study shows that in healthy women a decrease in plasma PCSK9 levels can be induced by fish oil intake without any impact on LDL levels. Post-menopausal women did have significantly higher LDL levels at baseline compared to pre-menopausal women (on average 3.03 vs 2.26 mM, respectively). Current target serum levels for treatment of disorders of lipid metabolism are LDL-cholesterol levels <2.6 mM (100 mg/dl), pointing out that the LDL levels in these study participants are in a healthy range and can possibly not be lowered further. A recent study by Rodríguez-Pérez and coworkers reported a similar observation from a double-blind randomized controlled trial (COMIT trial) carried out in North-American middle-aged men and women with at least one component of metabolic syndrome (and average baseline LDL level of 3.41 mM). The trial assessed the effect on endothelial function, and plasma fatty acid and sterol profiles, of a 4-week daily intake of dietary vegetable oil types enriched with omega-3, omega-6 or omega-9 fatty acids. The group that received a DHA-supplemented high-oleic canola oil (DHA as 5% of fatty acids, 36 to 60 g oil per day as a shake-style beverage), had a doubling of plasma DHA level and a reduction in PCSK9 levels of approximately 10%, compared to people receiving canola oil or a high-oleic canola oil. Consumption of the DHA-enriched canola oil also increased HDL cholesterol level and markedly lowered triglycerides (1.30 mM from 1.61 mM). The intervention trial had previously reported an improved blood pressure. Although PCSK9 levels were decreased, no significant enhancement in the lowering of LDL-levels was observed in this study (all tested canola oil types induced a significantly lower LDL level).