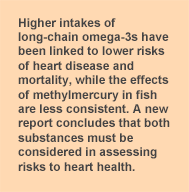 Fish consumption or supplementation with long-chain omega-3 PUFAs (n-3 LC-PUFAs) has frequently been associated with a significantly lower risk of cardiovascular disease and mortality. Although not all studies and meta-analyses of the relevant scientific publications have agreed with this conclusion, many health organizations worldwide have recommended increased consumption of fish, especially fatty species, for the reduction of cardiovascular disease mortality. Nevertheless, fish consumption remains low in many countries where cardiovascular disease is the leading cause of death. One reason for low seafood intakes is concern about the methylmercury, the form of mercury found in fish. Scientific studies have reported inconsistent findings about the association between tissue concentrations of methylmercury and the risk of myocardial infarction or ischemic heart disease. An increased risk was reported in a multi-center European study of men, a lower risk of myocardial infarction with higher levels of red blood cell mercury and selenium in Swedish adults and no association between toenail mercury concentrations and risk of coronary heart disease, stroke or total cardiovascular disease in U.S. men and women. These observational studies suggest that such relationships are complex and possibly confounded by other nutrients, including n-3 LC-PUFAs and selenium, as observed in data on child development from the Seychelles Islands. 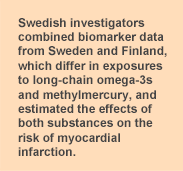 To better account for the ranges in nutrient and mercury exposure in different population studies, Maria Wennberg and colleagues at Umeå University, Sweden, combined data from studies in Swedish men and women and Finnish men and analyzed the relationships among exposures to methylmercury and n-3 LC-PUFAs in serum and the risk of myocardial infarction. Participants included those aged 25 to 74 years in Sweden and men aged 42 to 60 in Finland. Data on methylmercury exposure was obtained from red blood cell analysis in the Swedish study and from hair mercury content in the Finnish sample. The red blood cell data were transformed to hair mercury data using the ratio of hair to blood mercury of 250:1 and validated by hair and blood analyses in 9 blood samples from Finland. Plasma PUFAs were transformed to serum values on the basis of a linear relationship between EPA and DHA, validated by 33 samples analyzed in both media. The investigators developed a logistic regression model based on a range of hair mercury ≤8 μg/g and serum EPA + DHA between ≥2% and ≤8%. Covariates included smoking, body mass index, diastolic blood pressure, diabetes, apolipoproteins B and A-I and education. After analyzing the data using several models and observing that the outcomes varied little according to the different confounders, the investigators decided to use the crude unconditional model. 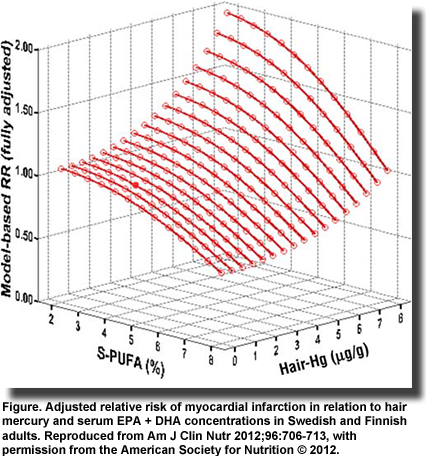 Hair mercury was higher among the Finnish participants (1.32 vs 0.57 μg/g), but serum EPA + DHA was higher in the Swedish sample (4.21% vs 3.83%). Median values for mercury and EPA + DHA were 0.88 μg/g and 4.0%, respectively. As there were few participants with hair mercury above 2.0 μg/g or serum EPA + DHA greater than 5.5%, these values were used for reference. In logistic regression analysis with continuous biomarker variables, higher serum concentrations of EPA + DHA were associated with a significantly lower risk of myocardial infarction, but the association was weakened by mercury exposure at high (>2 μg/g) levels. Hair mercury was associated with a higher risk of myocardial infarction, but the association was weakened with increasing concentrations of serum EPA + DHA. The adjusted relative risks of these exposures are depicted in the 3-dimensional model in the Figure. The reference points were the median values for control participants of 4% serum EPA + DHA and 1.0 μg/g hair mercury. Relative risks of myocardial infarction varied from 0.56 for those with the highest concentrations of EPA + DHA and the lowest hair mercury to 1.97 for those with high hair mercury and low serum EPA + DHA. The authors noted that the high-risk situation would be unusual because fish consumption is the main source of both markers, but most fish species are relatively low in methylmercury. Such a situation could occur in those who consume fish low in n-3 LC-PUFAs and high in methylmercury. In Finland, where most of the individuals with high hair mercury levels were observed, participants consumed lean freshwater species, which have lower concentrations of n-3 LC-PUFAs. Differences between Sweden and Finland in the types of fish consumed, which vary in n-3 LC-PUFA and mercury content, could account for the contrasting estimates of risk associated with fish consumption previously reported in these countries. Accounting for both variables in this analysis provided a more appropriate model for risk assessment. Similarly, Finnish investigators concluded that serum n-3 LC-PUFA concentrations were only associated with a lower risk of sudden cardiac death when hair mercury levels were considered.