The auditory system is an important sensory system, permitting the rapid perception of sounds that reach us, helping us orient ourselves within the surroundings. Through coordination with proprioceptor and the visual systems, the auditory system also helps in fine-tuning the self-awareness and mental image of our body by hearing the relative distances of our body parts when they produce noise. Given the importance of our auditory system, the consequences of hearing loss are significant to daily life, and encompass a wide range of physical and social effects; e.g. compromised social interactions, impairments in learning, loneliness, depression, loss of confidence, loss of income due to working disabilities, fatigue and headaches. Disabling hearing loss is defined as a hearing threshold greater than 40 decibel (dB) of sound pressure level in the better ear (>30 dB in children). Normal hearing is when auditory thresholds are below 25 dB across a range of frequencies that we can normally perceive. The prevalence of hearing loss globally is startling, with ~5% of the world population experiencing a measurable level of hearing loss. The prevalence of hearing loss increases with age and around a third of elderly people (>65 years) have a significant loss in hearing ability. Prevalence of disabling hearing loss is reportedly highest in South Asia, Asia Pacific and Sub-Saharan Africa. In South Asia, disabling hearing loss is 2.4% in children (up to 15 years), 9.5% in men, and 7.0% in women. In Europe/North-America it affects 4.9% of adult men and 4.4% in women. The lowest prevalence is found in the Middle-East and North Africa (4.1% of men and 2.9% women). Clearly, hearing loss is a disability of major proportions. Most cases of hearing loss are acquired. Exposure to loud and/or persistent noise over certain noxious levels can cause irreversible damage of auditory tissue structures. The loss of auditory hair cells, the sensory structures that ultimately capture sound transduced through air and bone structures into the cochlea, and damage to the spiral ganglia neurites that innervate these hair cells appears central to irreparable hearing loss. Noise exposure is one important cause of hearing loss, but exposure to ototoxic substances, such as some antibiotics, can also contribute. 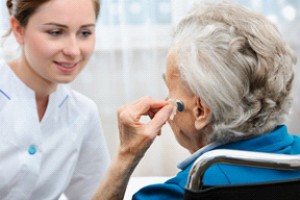 Sharon Curhan and colleagues at the Channing Division of Network Medicine, Brigham & Women’s Hospital, Boston, MA in collaboration with the Vanderbilt University School of Medicine (Nashville, TN) and the Harvard School of Public Health Medicine in Boston, MA, USA, now report on the results of a prospective cohort study that determined the relationships between fish consumption, long-chain omega-3 intake, and the risk of hearing loss. The study forms part of the Nurses´ Health Study, one of the world’s largest currently ongoing prospective cohort studies. The Nurses’ Health Study II is a cohort study initiated in 1989 as a joint activity by the Channing Division of Network Medicine and the Harvard School of Public Health. A group of over 116,000 female nurses, who enrolled at an age between 27 and 42 years, are interviewed every two years with validated questionnaires to gather information on their diet, lifestyle variables, and health. Medical records provide information on disease incidence, supplementary questionnaires are used to gather additional information, and tissue samples are collected from subsets of participants. The hearing loss study falls within the scope of better understanding complex chronic diseases using a variety of approaches taken by the Channing Division of Network Medicine.

The present study aims at better understanding if certain dietary habits affect hearing loss incidence. In the Nurses’ Health Study II specific information on dietary intake is assessed every four years by means of a semi-quantitative food-frequency questionaire. Baseline characteristics refer to 1991, the year when assessment was first made. Fish and shellfish consumption was determined by asking participants for the frequency of consumption of three classes of fish (canned tuna, light-meat fish, dark-meat fish), as well as shellfish. Total fish intake was obtained by summing up all fish and shellfish intake. The content of specific fatty acids was calculated using the reported food item intake multiplied by the specific content per serving reported by the US Department of Agriculture and a Harvard University food-composition database. The use of the employed food-frequency questionnaire had been shown previously to allow the ranking of study subjects by fish and fatty acid intake. In the 2009 questionnaire, women were also asked whether they had a hearing problem and when this was first noticed. After exclusion of women that did not respond, regularly took omega-3 and other supplements, provided incomplete or unreliable information on their dietary habits, or had cancer, the results of 65,216 women were available for further analysis. The primary study outcome, self-reported hearing loss, was scored as either no hearing problem, a moderate hearing problem, or a severe hearing problem. The study authors indicate that self-reported hearing loss assessment is a reasonably reliable method to assess hearing loss, and that audiometric measurements could not be made on such a large study population. Over the 18-year study period, 11,606 cases of hearing loss were reported to have occurred. Using multivariable models that permitted correcting for potential confounders such as the use of some medicines, intake of different nutrients, age, and race, among other factors, it was found that women who consumed one serving of fish a week had a 5 to 6% lower risk of hearing loss compared to women who consumed fish less than once a month (see Table 1 for the age-adjusted relative risk). Consuming fish at least twice a week was associated with an 18 to 20% decrease in reported hearing loss. The type of fish that the women consumed did not affect the observed risk reduction. 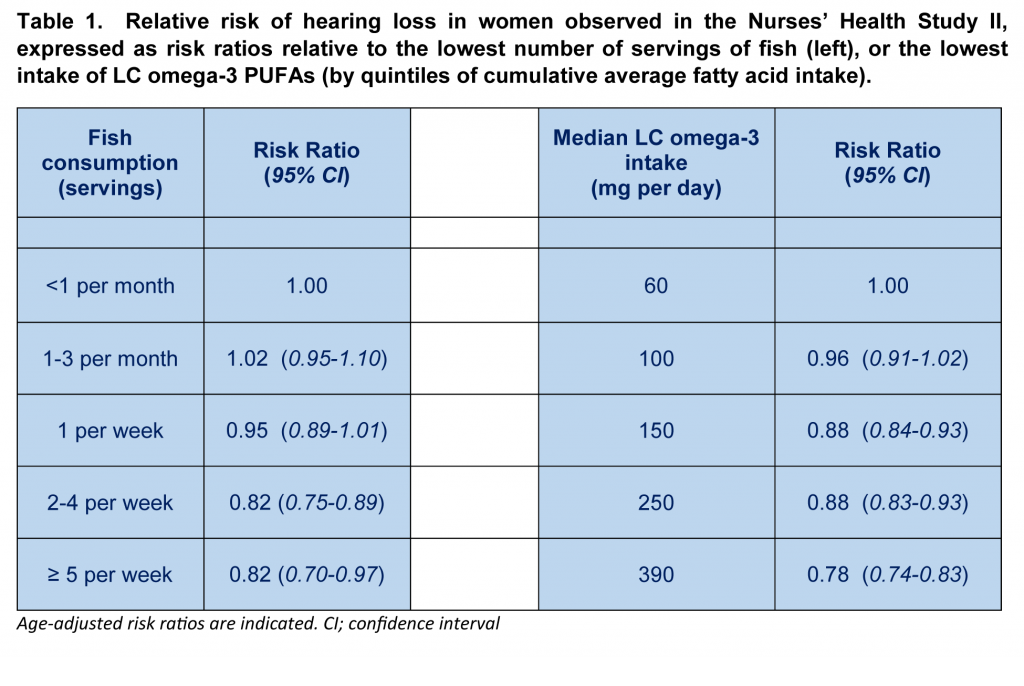 When the researchers looked at the relationship between the cumulative average intake of fatty acids and hearing loss, increased consumption of both total omega-3 PUFA and long-chain omega-3 PUFA was associated with a decreased risk of hearing loss. Linolenic acid consumption was unrelated to hearing loss incidence. The group of women with the highest consumption of LC omega-3 PUFA (median of 0.39 gram per day) had a 22% decreased risk of hearing loss, compared to women with the lowest median intake (60 milligram a day). No relationship between omega-6 intake or age and hearing loss was found in these women. In summary, this large prospective study provides support for the existence of a negative association between LC-omega-3 PUFA (and total omega-3) intake as well as fish consumption, and hearing loss in North-American adult women. Fats of Life has previously reported on studies that also found associations between increased omega-3 intake and reduced age-related hearing loss. Changes in hearing loss in the present study were measured through self-reported indications of hearing capability. Such measurements are not objective read-outs of auditory function and do not measure auditory thresholds. Information on subjective awareness on auditory capacity is nevertheless valuable as it refers to the significance people attach to their auditory perception. Limitations in the use of self-reported hearing loss questionnaires have been acknowledged.

The results obtained correspond to relatively low doses of LC omega-3s, within the daily dosing ranges that are recommended for healthy adults. It is important to stress that this study does not prove a causal relationship between fish consumption or LC-omega-3 intake, and a lowered risk of hearing loss. It may happen that North American women who eat more fish or have a higher LC omega-3 intake also experience less exposure to one or more primary causes of hearing loss, such as over-exposure to noise and ototoxic substances. Well-designed intervention studies will need to be undertaken to prove a causal relationship between prevention of hearing loss and increased LC omega-3 intake or fish and shellfish consumption. Reduced blood flow in the inner ear is believed to be an important contributor to cochlear tissue injury, for example, after noise-induced hearing loss. There is still little direct evidence that LC omega-3 PUFAs may reduce hearing loss by supporting adequate blood flow in the cochlea. In Meniere’s disease, the progressive hearing loss may be caused by intermittent ischemic injury of the inner ear, and a protective role for LC omega-3 PUFA in inner ear homeostasis has been postulated. Also, interest in understanding the role of the immune system in inner ear functioning is budding. The role of LC omega-3 PUFA in cochlear and hair cell functioning has certainly not been studied in much detail, in contrast to the visual system where LC omega-3s are known to play essential structural and functional roles.