The importance of long-chain PUFAs (LC-PUFAs) in fetal and infant development derives from the involvement of these fatty acids in brain structure and function and cell signaling in the brain, retina and neural cells. During development, the fetus depends on the maternal supply of these fatty acids for brain, eye and neural cell growth, which in turn depends on the mother’s diet for adequate supplies. Inadequate LC-PUFA intakes during pregnancy results in reduced levels of DHA in the infant’s brain, which have been associated with impaired cognitive and behavioral performance. There is growing interest in the health and developmental effects of diets high in omega-6 (n-6) PUFAs and relatively low in omega-3 (n-3) LC-PUFAs, a pattern typical of many Western diets where seafood consumption is low. Some, but not all, studies on the neurodevelopmental and cognitive effects of such diets suggest that increased intakes of n-3 LC-PUFAs through maternal supplementation or through LC-PUFA-enriched infant formula improve neurodevelopmental outcomes. However, the clinical findings have been inconsistent. On the other hand, recent reports have supported some benefit to brain development of diets lower in n-6 PUFAs and higher in n-3 LC-PUFAs. For example, an observational study reported that psychosocial performance scores in children whose mothers did not eat fish during pregnancy showed higher risks of suboptimal performance in verbal intelligence, prosocial behavior fine motor skills, communication and social development compared with children whose mothers ate fish. A Spanish study reported that maternal fish consumption 2 to 3 times/week was associated with higher scores on the McCarthy Scales of Children’s Abilities in 4-year-old offspring. Further, low blood n-3 LC-PUFAs were associated with poorer reading ability and working memory performance in 7- to 9-year-old schoolchildren in the U.K. In this particular study, higher total n-6 PUFAs were associated with better reading ability, although the association disappeared when the analysis was adjusted for sex and socioeconomic status. The investigators also reported that DHA supplementation in these children was associated with significantly improved reading ability and behavior problems in those with lowest baseline scores. All these studies point directly or indirectly to the cognitive and developmental benefits of higher intakes of n-3 LC-PUFAs. The question of n-6 PUFA intake has not been addressed directly. 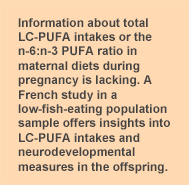 Information about total maternal LC-PUFA consumption, particularly in low-fish-eating populations and its relationship to child neurodevelopment, is lacking. In France, investigators conducting the EDEN Mother-Child Study explored the relationships between breastfeeding and maternal LC-PUFA intake in the last trimester of pregnancy and various measures of neurodevelopment in the offspring at 2 years of age. The EDEN study is a mother-child investigation of the pre- and postnatal determinants of child development and health in women from Nancy and Poitiers, France. 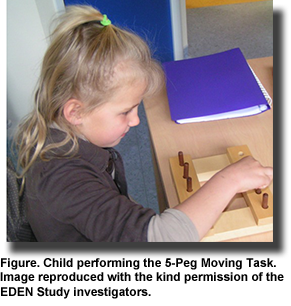 Pregnant women between weeks 24 and 28 of gestation were recruited from hospital prenatal clinics and were eligible to participate if they had a singleton pregnancy, no pre-pregnancy diabetes, were planning to stay in the area and were able to speak and read French. The researchers assessed maternal diet in the last trimester using a food frequency questionnaire given a few days after delivery and calculated intakes of total lipids, individual fatty acids and n-6:n-3 ratios from these data. Total n-3 PUFAs included alpha-linolenic acid and n-3 LC-PUFAs and total n-6 PUFAs included linoleic and arachidonic acids. Fish consumption was relatively low, with 63% of mothers consuming fewer than 2 fish servings/week. Only 54% of dietary DHA came from fish. Dietary consumption of total lipids, n-3 PUFAs and DHA was significantly higher in mothers who breastfed for any length of time after delivery. As a result, their baseline n-6:n-3 PUFA ratios were lower than mothers who did not breastfeed. There were no significant differences in n-6 PUFA intakes between mothers who breastfed and those who did not. Neurodevelopmental assessments of the children at ages 2 and 3 included the MacArthur Communicative Development Inventory, Ages and Stages Questionnaire, 5-Peg Moving Task (Figure), test of design copying from the Neuropsychological assessment battery, and verbal fluency a timed naming recall test. From 2,002 eligible participants there were 1,907 live births and dietary information from 1,585 mothers. The study followed 1,510 children for 2 years and 1,185 for 3 years. 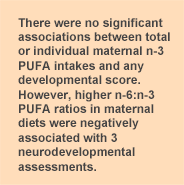 Overall, multivariate linear regression analysis did not detect any association between maternal fatty acid intake and the design copying test. Yet higher n-6:n-3 PUFA ratios were associated with longer times on the Peg Moving Task and with lower scores on the Ages and Stages Questionnaire and verbal fluency, regardless of breastfeeding status. In breastfed children, there were no significant associations between maternal fatty acid intakes and any of the neurodevelopmental evaluations. However, in never breastfed children, maternal intakes of total LC-PUFAs, n-6 LC-PUFAs and linoleic acid were negatively associated with the Communicative Development Inventory and Ages and Stages scores in multivariate regression analysis (Table). The n-6:n-3 PUFA ratio was also inversely associated with these scores and with verbal fluency. There was a significant interaction between breastfeeding and maternal n-6:n-3 PUFA ratio and the Communicative Development Inventory scores and a trend for a significant interaction with verbal fluency scores.

There were no significant associations between total or individual maternal n-3 PUFA intakes and any neurodevelopmental score. It is therefore tempting to speculate that breastfed children may have escaped the negative associations in neurodevelopment with n-6 PUFAs and a higher n-6:n-3 ratio because of their intake of n-3 LC-PUFAs from breast milk. Mothers with higher intakes of n-3 LC-PUFAs have higher levels of these fatty acids in their breast milk. 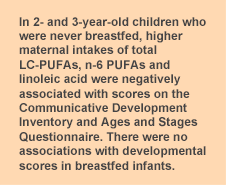 The investigators pointed out that the sample population had a higher socioeconomic status than the general French population. They also noted that the dietary questionnaire might not have accurately assessed maternal fatty acid intakes, a particular concern in estimating small intakes of nutrients not widely distributed, such as n-3 LC-PUFAs. The consumption of DHA, for example, in breastfeeding and non-breastfeeding mothers was 170 and 148 mg/day, respectively, levels below international recommendations for DHA intakes during pregnancy and lactation. Bearing in mind the study’s limitations, these findings raise the question of whether the large imbalance in the intakes of n-6 and n-3 PUFAs, especially by pregnant women, risks suboptimal neurodevelopment in the offspring of mothers who do not breastfeed.   Bernard JY, De Agostini M, Forhan A, de Lauzon-Guillain B, Charles MA, Heude B; the EDEN Mother-Child Cohort Study Group. Dietary n6:n3 fatty acid ratio during pregnancy is inversely associated with child neurodevelopment in the EDEN mother-child cohort. J Nutr 2013;143:1481-1488. [PubMed] Open Access