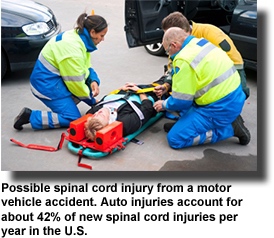 Traumatic spinal cord injury has severe consequences for survivors including pain, paralysis and impaired sensory and motor function and various effects in the cardiovascular, respiratory, endocrine and autonomic systems. The consequences depend on the site and extent of the injury. Surgical decompression, especially when performed within 24 hours after the injury is associated with improved neurological outcomes, although the timing of surgical decompression is controversial. Pharmacologic and neuroprotective agents tested in spinal cord injury include erythropoietin, nonsteroidal anti-inflammatory drugs, minocycline and progesterone. A promising agent for neuroprotection, cell survival and functional recovery is DHA, a long-chain omega-3 PUFA with demonstrated neuroprotective effects in animals with brain and spinal cord injury, and minimal or no adverse effects reported so far. Investigators in the laboratory of Adina Michael-Titus at Queen Mary University, London, and their colleagues elsewhere have published several studies on compression-induced spinal cord injury in the rat, showing that intravenous DHA administered within 30 minutes of injury leads to increased neuronal and axonal cell survival at the site of the lesion. They have also demonstrated improved locomotor function in the DHA-treated rats and a reduction in some, but not all, inflammatory responses soon after compression-induced spinal cord injury. 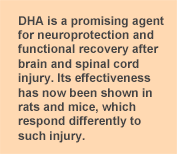 A new report from this group extended their studies with DHA in spinal cord injury to mice, which respond differently from rats to compression damage. For example, mice do not develop the progressive necrosis and large central cavitation that occurs in rats and other mammals. Differences in responses to DHA between the two species further extend the understanding of how DHA contributes to neuroprotection and recovery from compression spinal cord injury and may serve as a prelude to trials in humans. The investigators conducted a dose-response study to determine the appropriate dose range for intravenous DHA treatment following injury, then examined the combination of acute and chronic DHA treatment on functional, immunochemical and histological outcomes. The chronic treatment consisted of a DHA-enriched diet with or without intravenous DHA begun immediately following the injury. The diet contained 400 mg DHA per kilogram of animal body mass. Under anesthesia, adult female mice underwent a laminectomy at the T12 vertebra followed by compression of the cord. Intravenous DHA was given once, 30 minutes after compression injury. Functional recovery was evaluated using the Basso mouse scale for locomotion, administered daily for the first week and either daily or every 3 days until sacrifice at 4 weeks. A score of zero indicates complete paralysis and 9 no locomotor deficits. The injury resulted in a partial recovery from paralysis by 2 weeks with a Basso score of 3. By 4 weeks, recovery had plateaued at a score of 4.2. Animals with laminectomy, but no compression injury, recovered fully by day 3. 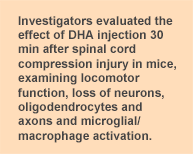 Injured mice sustained a substantial and significant loss of neuron-specific nuclear protein (NeuN) immunoreactivity at the epicenter of injury, which progressed over the 28 day study. Losses at 7 and 28 days were significantly greater than at 1 day. There was no cavitation in the cord. The investigators also observed a significant loss of APC-labeled oligodendrocytes in four different white matter areas of the injured animals. The loss increased over the 28-day period but differences between different days were not significantly different. Immunostaining with the antibody SMI32 revealed that injured mice had a significant loss of SMI32-positive axons within the first day after compression. Loss of axons continued over 28 days with the remaining axons appearing misaligned and swollen. Axonal loss was greatest in the lateral white matter, but reached statistical significance after 28 days in the dorsal column and ventral white matter. The investigators also observed significant microglial/macrophage activation 3 days post-injury, which was maximal at day 7. By 28 days, the immunoreactivity diminished, but remained significantly higher than in the uninjured controls. What effect did DHA have? The dose-response study showed that the highest level, infusion of 500 nmol/kg, was associated with significantly improved locomotor activity beginning 4 days after injury. Four-week Basso scores for animals given 500 or 250 nm­­ol/kg were 6.6 ± 0.6 and 5.8 ± 0.2, respectively. Those given the highest dose also had improved fine motor scores and overall improved function scores at days 13, 16, 19 and 22 compared with the 250 nmol/kg group. At 28 days, the mean Basso score for the 500 nmol/kg group was 3.6 points higher than in the saline treated group. Animals receiving the DHA injection or the infusion plus a DHA-enriched diet recovered motor function and fine motor control significantly faster than the saline-injected controls. At day 28, the Basso scores for the two groups were 5.8 ± 0.3 and 6.8 ± 0.2, respectively, scores that were not significantly different. A significant effect of the DHA-enriched diet on the DHA-infused animals was not apparent, but DHA-infused animals fed the DHA-enriched diet tended to have better Basso scores. Animals fed only the DHA-enriched diet did not differ from the untreated saline controls. 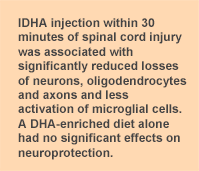 These results describe the effects of acute DHA injection in mice with spinal compression injury induced using a static compression technique. The injury resulted in loss of hindlimb motor function, which was partially restored with the infusion of 500 nmol of DHA per kg animal weight within 30 minutes of injury. The addition of a DHA-enriched diet to the treatment protocol had minimal effect on the locomotor or neuroprotective assessments during the 4-week recovery period, with the exception of significant additional protection against the loss of axons in the lateral white matter. This observation contrasts with previous findings by this group using DHA combination treatment in rats. The investigators did not evaluate doses larger than 500 nmol/kg body weight, but observed no toxicity effects with higher doses in rats. Treatment with the DHA-enriched diet alone did not protect against the neurological damage or cell loss. The authors commented that reduced food intake following injury would reduce the amount of DHA reaching the spinal cord tissue, but even with higher dietary exposure, an acute dose of injected DHA immediately following injury appears essential for neuroprotection, as reported previously in rats. Pretreatment of the animals with dietary or injected DHA prior to injury was not examined. This study documented that the earliest change in mice following injury was the disruption of the neuronal cytoskeleton, as reflected in the loss of SMI32 immunoreactivity within 24 hours, which persisted throughout the 4-week period. This damage leads to a decrease in the conduction velocity of the spinal cord axons and compromised locomotor function. The injury also resulted in the loss of neurons and oligodendrocytes within 24 hours, which persisted throughout the following 28 days. The acute loss of these cells was also reported in the rat model of compression injury. However, in the rat, cell loss occurred mainly in the first 24 hours, whereas in the mouse, cell loss continued for the next 28 days. The authors noted that in spinal contusion (bruising of the spinal column) injuries—the most common type of spinal injury in humans—the loss of neurons and oligodendrocytes is primarily an acute event, with no further cell loss after the first 7 days post-injury. Others reported that pretreatment with DHA injection 1 week plus 1 hour before spinal cord injury was associated with reduced functional deficits, white matter sparing and improved axonal sparing. This study bolsters the evidence in support of a clinical trial in humans of DHA treatment immediately following spinal cord injury. Addendum: After the newsletter was written, the editor obtained a prepublication case report of an adolescent who suffered severe traumatic brain damage in an automobile accident. Eleven days after the accident, high doses of fish oil were added to the patient’s tube feeding. Fish oil was continued for over one year. The young man regained consciousness, was discharged home 4 months after the accident and has continued to gain cognitive and motor function. He now walks with a cane and continues with physical therapy, but has speech and balance difficulties related to his injury. Initially, he was not expected to survive.   Lim SN, Huang W, Hall JC, Michael-Titus AT, Priestley JV. Improved outcome after spinal cord compression injury in mice treated with docosahexaenoic acid. Exp Neurol 2012;239:13-27. [PubMed] Worth noting Lim SN, Gladman SJ, Dyall SC, Patel U, Virani N, Kang JX, Priestley JV, Michael-Titus AT. Transgenic mice with high endogenous omega-3 fatty acids are protected from spinal cord injury. Neurobiol Dis 2012; pii: S0969-9961(12)00358-0. doi: 10.1016/j.nbd.2012.10.021. [PubMed] Figueroa JD, Cordero K, Baldeosingh K, Torrado AI, Walker RL, Miranda JD, Leon MD. Docosahexaenoic acid pretreatment confers protection and functional improvements after acute spinal cord injury in adult rats. J Neurotrauma 2012;29:551-566. [PubMed] Hall JC, Priestley JV, Perry VH, Michael-Titus AT. Docosahexaenoic acid, but not eicosapentaenoic acid, reduces the early inflammatory response following compression spinal cord injury in the rat. J Neurochem 2012;121:738-750. [PubMed] Tan ZS, Harris WS, Beiser AS, Au R, Himali JJ, Debette S, Pikula A, Decarli C, Wolf PA, Vasan RS, Robins SJ, Seshadri S. Red blood cell ω-3 fatty acid levels and markers of accelerated brain aging. Neurology 2012;78:658-664. [PubMed]