Linoleic acid is recognized as an essential fatty acid for human health because it cannot be synthesized by humans and needs to be ingested through the diet. It is a precursor of the polyunsaturated fatty acids (PUFA) of the omega-6 type, of which arachidonic acid is the most well-known. Arachidonic acid is the substrate for a large number of local hormones in the body, the eicosanoids, that regulate many aspects of tissue physiology. Linoleic acid itself is needed for proper formation of the skin epithelium, facilitating the formation of the corneocyte lipid envelope consisting of lipids cross-linked to protein to form a relatively impermeable barrier to water and exogenous pathogens. 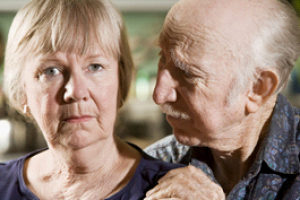 The precise roles of the relative contributions of essential fatty acids that we ingest as well as the relevance of their levels in different compartments of the body (organs, tissues and cell-types) is a topic of ongoing research. The easy division between the health-promoting actions of omega-3 versus “inflammation-promoting” omega-6 PUFAs is not as straightforward and simple to make as one may expect, since arachidonic acid serves as a precursor to both anti-inflammatory and pro-inflammatory local hormones, and also plays different roles in different organs, under healthy or pathological conditions. Nevertheless, too high absolute and relative levels of arachidonic acid compared to EPA and DHA are associated with the risk for chronic inflammatory disease that trace back to fundamental dietary imbalances. Whereas linoleic acid is recognized as an essential fatty acid, the association of high “omega-6” intake and arachidonic acid tissue levels with a predisposition to the development of chronic inflammatory disease, has led to the situation where relatively little attention has been paid to the possible potential benefits of linoleic acid itself, either as found in our diet or in our tissues, may have to health.

A prospective study carried out by Wu and colleagues from The George Institute of Global Health at the University of Sydney, Australia, and a number of universities in the US, has examined the associations of the levels of individual PUFA in plasma phospholipids with the risk of total mortality, and mortality from a number of cardiovascular disease causes. The multi-center study (named Cardiovascular Health Study) employed standardized protocols and annual in-clinic evaluations and telephone contact, to follow a cohort of elderly (≥65 yrs) men and women – a total of 2792 participants – who were free of cardiovascular disease (CVD) at the onset of the study, for a period of 18 years. The composition of PUFA in subjects’ plasma phospholipids was measured at the beginning of the study, and again between 15 years and the end of the study. Mortality was followed throughout the 18 years that the study was ongoing. Specifically the nature of mortality was determined and classified as “all-cause”, or by its cause. Furthermore, the incidence of fatal and non-fatal coronary heart disease (CHD) and stroke, and arrhythmic CHD deaths were measured.

The associations of the plasma phospholipid level of a specific PUFA with the observed risk were determined by regression analysis. Stratification was applied using age (<median, ≥median), gender, race, and plasma omega-3 PUFAs (<median, ≥median). During the study period, 1994 deaths occurred, of which 678 deaths were related to cardiovascular cause (427 fatal and 418 non-fatal coronary infarctions, and 154 fatal and 399 non-fatal strokes occurred). Estimated dietary intake of individual fatty acids had been assessed in the subjects prior to study initiation using a validated semi-quantitative picture-sort food-frequency questionnaire.

An additional finding of interest was that the highest levels of both linoleic acid and omega-3 PUFAs predicted a further risk reduction for total mortality. Elderly people with the highest levels of linoleic acid and omega-3 PUFAs had a 54% lower risk of total mortality and a 64% lower risk of CVD mortality, compared to study subjects with the lowest levels of both. None of the other PUFAs in plasma phospholipids was associated with reduced or increased risk in mortality. Careful inspection of baseline characteristics of the subjects indicated that statistically significant trends could be observed between quintiles with increasing percentages of linoleic acid in plasma phospholipids; lower average age, higher % males, higher % white Americans, increased annual income, decreased % diabetes mellitus and treated hypertension, increased physical activity, decreased body mass index, decreased waist circumference, lower number of daily servings of fruit, and increased usage of vegetable oil and butter for cooking. 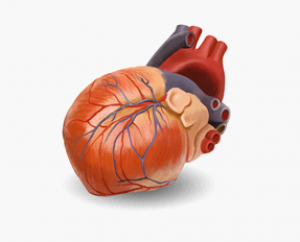 The results are the findings of a prospective study that has been executed over a period of several years. The surprising result is important for our understanding of the specific associations, and potential contributions, that different essential fatty acids have in disease prevention through lowering the risk for particular disease etiologies. This study is a prospective study and only associations can be offered, which in addition are limited to elderly American men and women. Of interest, the study points to complementary associations for omega-3 LCPUFA and linoleic acid in the primary prevention of cardiovascular pathologies. In this scenario higher circulating levels of linoleic acid play a more marked role in reducing the risk for non-arrhythmic CVD, whereas omega-3 LCPUFA appear to associate more strongly with a reduced risk for arrhythmic disorders leading to death. The combined and additive risk reduction appears to give a compelling indication that both omega-6 and omega-3s are important for health. This study furthermore indicates that the highest plasma phospholipid linoleic acid levels are actually associated with a reduced total and CVD mortality in healthy older adults.

The levels of PUFA in plasma phospholipids may not perfectly follow a close relationship with their long-term dietary intake, and could be a reflection of transient concentration changes occurring after recent food intake. Basing correlations on a single baseline measurement of plasma phospholipid levels may have limited value for reflecting long-term intake of specific fatty acids. The levels of linoleic acid in plasma phospholipids has been reported to follow the changes in red blood cell membranes, considered a pool that is more strongly associated with longer term intake patterns. The authors state the reported associations may even be underestimations of true associations, and that inter-individual correlations between plasma phospholipid composition of omega-6 PUFAs and measured risk factors are comparable to associations for other cardiovascular risk factors such as blood pressure. Also the fasting plasma phospholipid levels of omega-3 LCPUFA reflect their habitual dietary intake, and offer some indication of long-term intake behavior. In any case, it will be of interest to see confirmation that the associations observed in the present study between PUFA levels in plasma phospholipid and mortality will also be observed when linoleic acid and omega-3 LCPUFA are measured in red blood cell membranes and, if possible, tissue biopsies, which may be more confident read-outs for longer term intake. 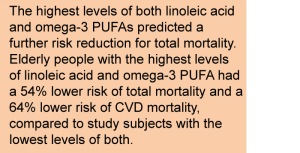 The publication discusses a number of other studies that have indicated beneficial associations for linoleic acid and mortality across distinct populations. A recent meta-analysis of prospective cohort studies also points out a meaningful reduced risk in coronary heart disease by linoleic acid in a dose-dependent fashion. Notably, changes in dietary intake of one fatty acid are often linked to concomitant changes in other lipid components of the diet. Currently, the debate on the potential beneficial effects of dietary linoleic acid is open, as meta-analyses of intervention studies have pointed to both protective and deleterious effects of increased dietary intake of omega-6 PUFA and linoleic acid on coronary heart disease and death. A more detailed analysis of the effects that can be uniquely attributed to changes in dietary linoleic acid compared to other PUFA and other fatty acids is highly desirable, to extricate the interdependent effects present in intervention trials.

The results of this study indicate that linoleic acid in plasma phospholipids may be a predictor for the risk of non-arrhythmic type of cardiovascular death, such as heart failure, in elderly Americans. Omega-3 LCPUFA levels appear to be associated with reducing the mortality caused by arrhythmias. Future studies that explore the mechanism whereby linoleic acid itself might be involved in lowering CVD, and in combination with omega-3 LCPUFA EPA and DHA, are clearly of interest, to understand such potential complementary actions on different aspects of cardiovascular disease. It is interesting to see that we can gain further appreciation for the “essentiality” of both the omega-6 and omega-3 fatty acids, which are not necessarily competing to achieve better health. Especially in the elderly, where risk of CVD is greatest, this seems worthy of further examination and scrutiny.