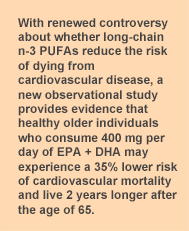 As discussed in the previous article on the Risk and Prevention study, evidence for the effectiveness of long-chain n-3 PUFAs (n-3 LC-PUFAs) in reducing the risk of cardiovascular disease and mortality in primary and secondary prevention trials is inconsistent. Long considered to reduce the risk of sudden cardiac death, cardiovascular mortality and disease, low doses of n-3 LC-PUFAs may be of less benefit in patients who are receiving optimum medical care. At the same time, the evidence for the association between fish and n-3 LC-PUFA consumption and cardiovascular benefits is generally considered robust. The ideal dose for various patients and healthy populations likely varies substantially, but has not been precisely defined for different groups. Whether the consumption of n-3 LC-PUFAs or blood levels of these fatty acids are associated with lower all-cause mortality is undecided. One study reported a lower mortality risk with supplemental n-3 LC-PUFAs following a myocardial infarction in patients with or without type 2 diabetes. A systematic review of randomized and prospective cohort studies found no effect of EPA and DHA supplementation on all-cause mortality in 17 trials, but a significant reduction in the risk of cardiac, cardiovascular or sudden cardiac death with the daily consumption of 200 mg of DHA and EPA. In several studies where fish or n-3 LC-PUFA consumption was associated with lower total mortality, most of the lower mortality was attributed to reduced cardiovascular death. Further, deaths from non-cardiovascular causes that are not influenced by n-3 LC-PUFAs would dilute their effect on total mortality. To overcome the limitations of dietary intake studies and the complications of pre-existing cardiovascular disease, Dariush Mozaffarian and colleagues at the Harvard Medical School and elsewhere in the U.S. examined the relationships between plasma biomarkers of n-3 LC-PUFAs and mortality from all causes and cardiovascular diseases in healthy populations in 4 communities across the U.S. They also included associations with inci 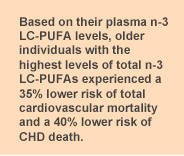 dent cardiovascular diseases. Participants were enrolled in the Cardiovascular Health Study, a prospective cohort of adults 65 years of age or more. After exclusions for prevalent cardiovascular disease, the study included 2,692 participants. The investigators expected that n-3 LC-PUFAs would be associated with reduced cardiovascular mortality, but not deaths unrelated to cardiovascular disease. They further hypothesized that DHA would be most strongly associated with arrhythmic coronary heart deaths and EPA and DPA with nonfatal coronary heart disease (CHD). The study enrolled participants in 1992-1993 and monitored them with clinic examinations and telephone contacts alternated every 6 months through 2000. All mortalities and incident coronary heart disease and stroke events were assessed and adjudicated by a central committee as previously described. Fatty acids were measured in plasma phospholipids and divided into quintiles. Follow-up was measured as 30,829 person-years. At follow-up, the participants’ mean age was 74 years and 64% were female. Eighty-eight percent were white and 12% African-American. After adjustment for demographic, cardiovascular, lifestyle and dietary factors (including fish intake), higher concentrations of EPA, DPA, DHA and total n-3 LC-PUFAs were significantly associated with lower total mortality (Table 1). Participants in the highest quintile of plasma phospholipid total n-3 LC-PUFAs had a 27% lower risk of mortality (P for trend < 0.001). 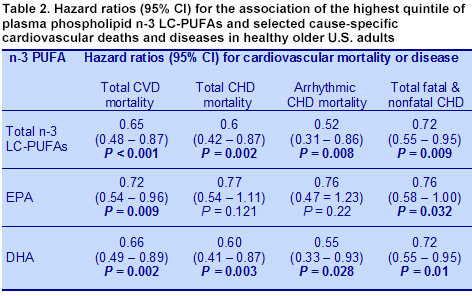 This study is important for demonstrating that in healthy older individuals without the complications of advanced cardiovascular disease, higher blood levels of n-3 LC-PUFAs were associated with a 27% lower risk of dying from any cause and at least a 35% lower risk of mortality from cardiovascular and coronary heart diseases. The highest EPA levels were associated with a 28% lower risk of nonfatal myocardial infarction. Although the highest levels of total n-3 LC-PUFAs were linked to 37% fewer occurrences of ischemic stroke, there were no other significant relationships with any measure of stroke or stroke mortality. The investigators noted that changes in plasma phospholipid PUFA concentrations with dietary consumption 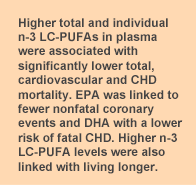 were nonlinear, with the greatest increases occurring at intakes of EPA + DHA up to about 500 mg per day. Above that amount concentrations increased much more slowly. The study differentiated more clearly between EPA and DHA, with the former associated with fewer nonfatal coronary events and DHA linked to a reduced risk of fatal CHD. Both fatty acids are usually found together in food and supplement sources and their metabolism is inter-related, so these associations may not be as clear-cut as they appear. Although this was a prospective observational study, it clearly suggests that a diet that maintains higher levels of n-3 LC-PUFAs contributes to a longer healthier life. The investigators calculated that individuals in the highest quintile of n-3 LC-PUFAs, equivalent to consuming approximately 400 mg of EPA + DHA per day, would gain an additional 2.2 years of life after the age of 65. That seems like a modest dietary adjustment to make for such a desirable outcome.   Mozaffarian D, Lemaitre RN, King IB, Song X, Huang H, Sacks FM, Rimm EB, Wang M, Siscovick DS. Plasma phospholipid long-chain ω-3 fatty acids and total and cause-specific mortality in older adults: A cohort study. Ann Intern Med 2013;158:515-525. [PubMed]