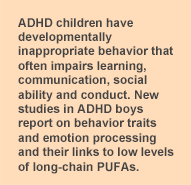 Attention deficit hyperactivity disorder (ADHD) entails a complex set of disturbances and behaviors that impairs a person’s ability to function and increases the chances that the symptoms will persist to adulthood and predispose to poor occupational functioning. ADHD has been described by the American Psychiatric Association in its newly revised diagnostic manual DSM-V as a pattern of [developmentally inappropriate] behavior that includes at least 6 symptoms from either or both of the inattentive or hyperactivity and impulsivity clusters of behaviors. These symptoms often occur along with learning difficulties, conduct disorder, anxiety, speech problems and other difficulties. Children with ADHD often have difficulties in communication, personal relationships, family and educational environments, other health issues and a poorer quality of life. The frequency of ADHD diagnosis may be increasing and could accelerate with the broader definition of the condition by the American Psychiatric Association. For example, in a large health maintenance organization in the U.S., physician-diagnosed ADHD in children aged 5 to 11 years increased from 2.5% in 2001 to 3.1% in 2010, a 24% increase. The National Center for Health Statistics reported an increase in the prevalence of ADHD in the past decade among children 5 to 17 years of age. On the other hand, the U.S. Centers for Disease Control and Prevention reported that the prevalence of ADHD in the past 12 months from 2001 to 2004 was estimated at 8.6% in children 8 to 15 years of age and 8.4% in 2011 for children 3 to 17 years of age. The prevalence of ADHD in school-aged children and adolescents in the U.K. was estimated at 5%. One of the less frequently investigated facets of ADHD is emotional behavior. In ADHD adults, emotional dysregulation may be a core feature, but its presence in children with ADHD is unclear. A recent study reported two distinct patterns of response to emotional stimuli in ADHD children with either low or age-appropriate prosocial behavior, suggesting that emotional dysregulation in children, as in adults, is heterogeneous. Others reported that 57% of ADHD children with deficient emotional self-regulation had persistent emotional dysregulation 4 years later and more comorbidities compared with ADHD children without emotional dysregulation. Clinically diagnosed ADHD children reportedly had high rates of internalizing emotional symptoms, externalizing problem behaviors and aggression compared with non-ADHD controls.

Evidence suggests that n-3 LC-PUFAs affect behavior in healthy children and those with neurodevelopmental disorders. DHA supplementation of healthy children with very low reading scores was associated with improved behaviors as rated by the parents. Six months’ supplementation with n-3 and n-6 PUFAs was associated with improved behaviors in ADHD children in another study. A small study of ADHD children supplemented with EPA, DHA or placebo reported improvements in oppositional behavior and several other ADHD symptoms in those who consumed the DHA supplement. Although not all studies have observed improved behaviors in response to n-3 LC-PUFA supplementation, links between n-3 LC-PUFAs and behavior in ADHD children are consistent with the involvement of n-3 LC-PUFAs in cell signaling and synaptic function. The underlying neurobiology of ADHD has revealed changes in activation patterns and connectivity in widespread brain regions, as observed using structural and functional magnetic resonance imaging. For example, individuals with ADHD have different activation patterns in the striatal and inferior frontal gyrus, which affect responses to reward or inhibition cues and that these are related to certain genotypes. A recent review described and compared the alterations in the neurobiological circuits in children with various neurodevelopmental disorders, noting that ADHD children have prominent abnormalities in the inferior prefrontal cortex and its connections to striatal, cerebellar and parietal regions of the brain. These findings have been extended to demonstrate spatial and temporal abnormalities in sustained attention and executive control in ADHD children. Another recent review integrated data from structural and functional neuroimaging studies and other approaches to better understand how the connectivity deficits in ADHD might arise. Reduced brain volumes, thalamic atrophy and abnormal development and connectivity in the pulvinar nucleus have all been associated with ADHD symptoms in children. Separate studies have linked many of these observations to n-3 LC-PUFAs in brain. In 3 observational studies, 2 of which are described here, investigators at King’s College and other U.K universities report findings on emotional traits, temperament and emotion processing and their relationships to plasma n-3 and n-6 PUFAs in boys with ADHD. Boys are more than twice as likely to develop ADHD as girls. Previous studies have reported significantly lower n-3 long-chain (LC) PUFAs in the blood of ADHD compared with age-matched controls, in spite of similar dietary intakes. Participants were recruited from local schools and the community and had their diagnosis confirmed by diagnostic interview and scores above 65 on the Conners’ Parent and Teacher Rating Scale ADHD index. Those with other psychiatric conditions and learning disabilities were excluded, except for those with conduct disorder or oppositional defiant disorder, which often accompany ADHD. More than half the 29 participants were not taking medications for ADHD, and in those who were, tests were performed 24 hours after withholding treatment. The boys averaged 14 years of age.

All participants were evaluated for plasma fatty acids in choline phosphoglycerides, cholesteryl esters and triglycerides. Clinical and emotional traits were assessed with a battery of tests, including: Beck’s Youth Inventories; Buss-Perry Aggression Scale; Depression, Anxiety and Stress Scales; Barratt Impulsiveness Scale; Strengths and Difficulties Questionnaire; and the Essential Fatty Acid Deficiency Questionnaire (unpublished). The ADHD boys also completed the Anti-Social Process Screening Device and the Inventory of Callous and Unemotional Traits for Youth. Results from the clinical assessments revealed significant differences between the ADHD and healthy control youths in nearly all aspects of the Strengths and Difficulties questionnaire and Becks Youth Inventories except for emotional distress, anxiety disorder and the anxiety scale. The groups differed significantly in all behavioral measures in the Buss-Perry Aggression, Barratt Impulsiveness and Conners’ Parent and Teacher assessments (Table). There were no significant differences between the groups in IQ scores. 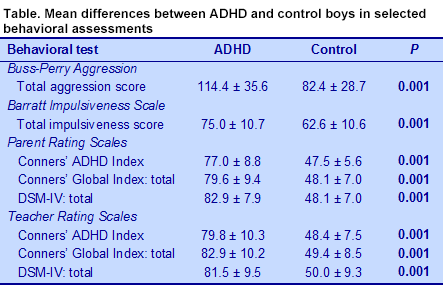 Findings for fatty acids were corrected for multiple testing using the false discovery rate. Unlike the behavioral assessments, there were no significant group differences for plasma fatty acids in any of the lipids tested after correction for multiple tests. The relationships between n-3 LC-PUFA and n-6 PUFA levels and behavioral test results in both groups were not statistically significant for any evaluation after correction for multiple tests. However, findings in the ADHD participants, who were tested with the Inventory of Callous and Unemotional Traits, showed significant and inverse relationships with the percentages of EPA and total n-3 PUFAs in the plasma choline phosphoglycerides. There was a trend for a similar inverse relationship with DHA. These findings, except for callous and unemotional behaviors, did not support the hypothesis that plasma PUFAs were associated with behavioral traits in ADHD. No other measures in the ADHD children, such as IQ and fatty acid deficiency, were related to plasma fatty acids.

The second study proposed that ADHD participants would have impaired emotion processing compared with age- and sex-matched controls. The investigators further suggested that n-3 LC-PUFA concentrations in plasma choline phosphoglycerides would be positively associated with responses to happy faces and that n-6 LC-PUFAs would be associated with the responses to negative stimuli. The study enrolled 76 boys, 14 years-of-age, 63 of whom had EEG data. Gaps in the data resulted from faulty recordings or missed appointments. Eligibility criteria were the same as in the preceding study. The ADHD participants differed significantly from the controls in lower IQ and higher scores in all Conners’ Parent and Teacher Rating Scale assessments. The investigators considered the lower IQ intrinsic to ADHD and these shared characteristics have been attributed to genetics. The investigators used electroencephalography to measure brain responses in participants exposed to emotional stimuli, which generate event-related potentials. The stimuli included 3-dimensional facial expressions of 8 different individuals each depicting fear, sadness, happiness and anger relative to neutral faces. Participants experienced a maximum of 192 stimuli. Average event-related potentials were calculated for each stimulus and area-under-the-curve measurements determined from the amplitude of each wave at single time points. These were averaged and then multiplied by the total time frame to obtain a map of the event-related potential. The analyses took into account the EEG electrode site, time of measurement, emotional stimulus, group and interactions among these variables. The relationships among variables were corrected for multiple testing.  Differences in wave patterns between ADHD and control adolescents have been correlated with fearful and sad responses Assessments of emotional responses followed the Hallgren model, which consists of two main parts, an early phase of orientation (N2) and a second stage of event integration (N4). The first phase is free from conscious consideration, while the second reflects the cognitive integration of emotional experiences. The results discussed here will focus only on these measurements, although others may be of interest. Readers should consult the original paper for more details.

In the fatty acid analysis, there were significant differences in n-3 and n-6 PUFAs between ADHD and control boys. Concentrations of all n-3 PUFAs (alpha-linolenic acid, EPA, DPA, DHA and total n-3 PUFAs) were significantly lower in the plasma choline phosphoglycerides of ADHD participants compared with the controls. Total n-6 PUFAs, ARA and two n-6 PUFA intermediates were also significantly lower in the ADHD youths compared with the controls. These findings differ from the first study in which there were no group differences in n-3 or n-6 PUFAs. Neither study provided information about dietary intakes in the two groups. For the N2 event-related responses, ADHD participants had significantly smaller area-under-the-curve responses overall compared with the control group, but there were no significant differences between the groups in response to different facial expressions. The effect of electrode site was significant, with greater activation at the frontal scalp electrode. The overall event-related potential responses at the last time point (N4), reflecting event integration, were significantly different between the two groups, with lower activation in the ADHD boys. The frontal scalp electrode site was also significant. The responses to different faces were not significant. 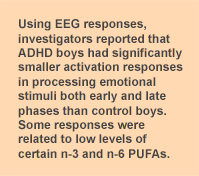