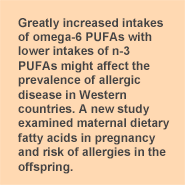 Attempts to determine the cause(s) of the increased prevalence of allergic diseases in Western countries have led to the investigation of how dietary fatty acids and other factors might affect the susceptibility to and severity of allergic diseases, especially in infants and children. In recent decades, the consumption of omega-6 (n-6) PUFAs has increased dramatically, while that of omega-3 (n-3) PUFAs, especially of the long-chain n-3 LC-PUFAs, has diminished. This has resulted in lower tissue concentrations of n-3 LC-PUFAs. High levels of n-6 PUFAs in conjunction with low concentrations of n-3 LC-PUFAs favor the production of inflammatory eicosanoid mediators derived from arachidonic acid. With low intakes of n-3 PUFAs, there are fewer anti-inflammatory eicosanoids produced to counteract the effect of n-6-derived eicosanoids. As inflammatory responses in airways, skin, eyes and nose characterize the symptoms of asthma, eczema and allergic rhinitis, the rationale for altering the relative intakes of n-6 and n-3 PUFAs seems reasonable. Many complex diseases are thought to have developmental origins. In the case of allergic diseases, evidence suggests that events during fetal life affect an individual’s risk. Fetal programming of the immune system is affected by fatty acids, with high maternal intakes of n-6 PUFAs and low exposure to n-3 LC-PUFAs increasing the risk of allergic symptoms. Observational studies support this suggestion, but data from randomized intervention trials are mixed. All agree, however, that the origins of allergic disease are multifactorial, reflecting the interplay among genetic and environmental factors. An early study aimed at affecting fetal immune regulation in infants at high-risk for atopic disease compared the effect of high-dose n-3 LC-PUFAs or placebo given to pregnant women in the last half of pregnancy. The infants born to fish-oil-supplemented mothers were 10 times less likely to have severe atopic dermatitis compared with the infants of placebo mothers, but incidence was similar in both groups. In another study n-3 LC-PUFA supplementation during pregnancy, children with at least one parent having current or previous allergic symptoms whose mothers consumed 3.7 g per day of n-3 LC-PUFAs were significantly less likely to develop food allergy in the first year of life. They also had a significantly lower prevalence of eczema up to 12 months of age. 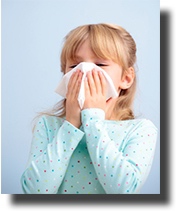 However, studies on n-3 LC-PUFA supplementation in pregnancy have reported inconsistent results. Two studies reported no differences in IgE-associated allergies at one or 2 years of age. In the latter study, the cumulative incidence of IgE-associated disease and disease severity were significantly reduced, suggesting an overall benefit. Another study reported that increased consumption of oily fish in pregnancy modified neonatal immune responses, but was not associated with the incidence or severity of atopic dermatitis in 6-month-old infants. The complexity of the effects of n-3 LC-PUFAs in the risk of allergic disease are illustrated in the Childhood Asthma Prevention Study (CAPS) in which pregnant women whose unborn children were at high risk of allergic disease consumed n-3 LC-PUFAs or a placebo in the last half of pregnancy. At the age of 18 months or 5 years, the incidence of asthma or atopy in the treated group did not differ from the controls. However, at 18 months of age, the children of n-3-supplemented mothers experienced significantly less wheeze, doctor visits for wheeze and bronchodilator use. A recent review of studies on n-3 LC-PUFA supplementation with n-3 LC-PUFAs in pregnancy and lactation concluded that supplementation in pregnancy decreases childhood asthma and responses to skin prick tests. The other side of the PUFA coin is the high consumption of n-6 PUFAs, mainly from linoleic acid. Studies examining the effect of high intakes of n-6 PUFAs have also reported mixed results. Higher risk of childhood rhinitis was associated with higher levels of n-6 PUFA in colostrum, but a lower risk of childhood eczema was associated with a high ratio of n-6:n-3 LC-PUFAs in maternal blood at 34 to 36 weeks’ gestation. Higher arachidonic acid in this study was associated with a lower risk of eczema at 7 months of age. In contrast, the CAPS study reported that the prevalence of asthma, wheeze, eczema or atopy was not associated with the ratio of n-6:n-3 PUFAs in 5-year-old offspring. In another Australian cohort, a lower ratio of dietary n-6:n-3 PUFAs in 8-year-old children was associated with a significant reduction in asthma.

Further investigation of dietary PUFAs during pregnancy and risk of allergic disease was reported in a study led by Bright Nwaru of the University of Tampere and colleagues at 5 universities in Finland. The researchers examined the relationship between maternal diet during pregnancy and lactation, the child’s diet during infancy and the child’s development of allergic diseases, asthma and type 1 diabetes at the age of 5. As part of the original protocol, participants were recruited if their newborns had HLA-susceptibility to type 1 diabetes. Of the 3,253 participants in the study, data on maternal diet in pregnancy were available for 2,441 children. Assessment of allergies in the children at age 5 was conducted by parental questionnaire with definitions of allergic rhinitis, wheezing and atopic eczema established at the outset. In confounder-adjusted analysis, none of the maternal dietary fats or fatty acids was associated with the occurrence of atopic eczema or wheeze at 5 years of age. Higher maternal consumption of n-6:n-3 PUFAs during pregnancy was associated with a significantly increased risk of allergic rhinitis (Hazard ratio = 1.35, CI = 1.05 to 1.73). Those in the highest quarter of alpha-linolenic acid intakes also experienced a significantly lower risk of allergic rhinitis (HR = 0.74, CI = 0.56 to 0.99). These observations are consistent with a lower risk of wheeze reported in Japanese infants 16 to 24 months of age whose mothers had higher intakes of alpha-linolenic acid or DHA. Higher intakes of n-6 PUFAs, especially linoleic acid, were related to a greater risk of eczema in the Japanese infants. It has been suggested that dysregulation of n-6 PUFA metabolism is associated with IgE production and atopy in general, not necessarily with atopic dermatitis. However, after a Bonferroni adjustment for multiple comparisons, associations with the n-6:n-3 PUFA ratio and with alpha-linolenic acid  intakes were no longer statistically significant. 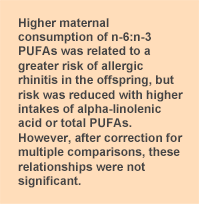 Regrettably, the fatty acid status of the mothers at delivery or late in pregnancy was not evaluated in the Nwaru study. Such data might have reduced the errors associated with measuring dietary intakes. One might also ask whether the correction for multiple comparisons was too conservative. As this study was designed primarily to assess the risk of type 1 diabetes, not all participating parents had current or historical allergies. For example, 82% and 33% of parents had no history of asthma or allergic rhinitis, respectively. Thus, not all offspring had a high genetic risk of these allergies. Although individual dietary fatty acids in the maternal diet were not associated with the risk of allergic rhinitis or other allergic diseases in this study, the offspring of mothers who consumed a higher ratio of n-6:n-3 PUFAs had a higher risk of rhinitis at age 5. Higher maternal intakes of alpha-linolenic acid or total PUFAs were associated with a lower risk of rhinitis.   Nwaru BI, Erkkola M, Lumia M, Kronberg-Kippilä C, Ahonen S, Kaila M, Ilonen J, Simell O, Knip M, Veijola R, Virtanen SM. Maternal intake of fatty acids during pregnancy and allergies in the offspring. Br J Nutr 2012;108:720-732. [PubMed]