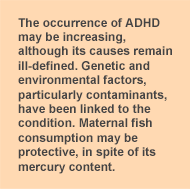 Attention deficit/hyperactivity disorder (ADHD) is one of the most common behavioral disorders in childhood and its occurrence appears to be increasing. The U.S. Centers for Disease Control and Prevention estimated that parent-reported ADHD increased 20% from 2001-2003 to 2007-2009, from 7.5% to 9.0 % of children aged 5 to 17 years of age. Others have estimated that the worldwide prevalence ranges between 8% and 12% of all children. A recent review of prevalence studies estimated the prevalence of ADHD among children and adolescents at 5.9% to 7.1%. Caution is warranted about the rising prevalence of ADHD as increases may also relate to changes in the diagnostic criteria for this condition. ADHD exacts a substantial toll on families, the educational system and the affected children and often extends to adulthood. Its economic costs in the U.S. are also considerable. The causes of the disorder remain ill-defined, although there is evidence that genetic and environmental factors, including prenatal exposure to tobacco smoke, lead, mercury and persistent organic contaminants, have been linked to the condition. Associations between the effects of higher consumption of fish and shellfish and exposure to methylmercury, a known neurotoxin present to some extent in most seafood, have been investigated in many studies. Most have concluded that the health benefits from greater intakes of fish outweigh the risks associated with methylmercury. Prenatal exposure to higher levels of long-chain omega-3 PUFAs (n-3 LC-PUFAs) was associated with beneficial effects on neurophysiologic and behavioral outcomes in children in spite of exposure to several environmental contaminants. Children whose mothers ate more than 2 meals of fish per week had higher cognitive scores compared with those whose mothers did not eat fish even though they were exposed to methylmercury in fetal life. The offspring of mothers who ate oily fish during pregnancy had a significantly lower risk of hyperactivity at 9 years of age. Others reported that higher cord blood DHA levels were associated with significantly lower scores for hyperactivity and inattention in the offspring at 10 years of age. 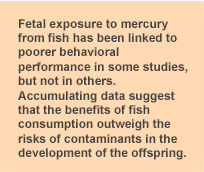 The adverse effects of prenatal exposure to methylmercury may confound the beneficial effects of n-3 LC-PUFAs in infant development, as shown in a longitudinal analysis of the Seychelles Child Development Nutrition Study. In the Seychelle Islands, women consume an average of 12 ocean fish meals per week and their infants have an average prenatal exposure to methylmercury of 6.9 ± 4.5 μg/g as measured in maternal hair during pregnancy. Maternal hair mercury is highly correlated with fetal brain mercury content. Results from this study have shown no consistent pattern of adverse effects from methylmercury in the offspring through 11 years of age. By the age of 17, the lack of adverse associations remained along with some positive ones, which were interpreted as a reflection of the beneficial nutrients in fish. This study provides the most detailed, long-term follow-up of the effects of eating more than 5 times the amount of fish recommended during pregnancy and lactation in the U.S. The benefits of n-3 LC-PUFAs and other nutrients in seafood continue to outweigh the adverse effects of exposure to methylmercury. The primary exception to this observation has been the exposure of pregnant women in the Faroe Islands to very high levels of methylmercury from eating pilot whale, a practice now abandoned. Studies of the children whose mothers were exposed to methylmercury primarily from eating pilot whale have consistently reported neurocognitive deficits up to the age of 14 years. The exposures were also confounded by the presence of polychlorinated biphenyls (PCBs) and other organic contaminants in pilot whale, which are neurotoxic themselves, but may also enhance the neurotoxicity of methylmercury. In these studies, when the effects of fish consumption were analyzed for participants who did not eat pilot whale, fish consumption was consistently associated with higher performance outcomes. There is some suggestion from the literature that prenatal exposure to methylmercury may be associated with deficits in attention, memory and motor function in children, but the children in this study were also exposed to PCBs and other substances that might have contributed to the observations. Others have reported associations between prenatal exposure to lead, but not methylmercury, and core symptoms of ADHD. Prenatal exposure to organochlorines was also associated with deficits in attention in boys. Given the limited information about the relationships between maternal fish consumption and exposure to methylmercury and the symptoms of ADHD in the offspring, a new examination of these relationships is welcome. Sharon Sagiv from Boston University, U.S., and colleagues analyzed data from a cohort of U.S. children whose mothers consumed an average of nearly 4 fish servings per week during pregnancy. At the time of pregnancy, the mothers resided close to a contaminated harbor in Massachusetts, U.S., into which PCBs had been discharged prior to their ban in the 1970s. Approximately 10% of these mothers consumed local fish during their pregnancy. There were 788 children recruited for the study beginning in 1993, of which 607 were assessed for neuropsychological outcomes approximately 8 years after birth. For the assessed children, 515 had data on maternal fish consumption and 421 had information on prenatal mercury from maternal hair analysis about 10 days after delivery. Child behaviors were assessed using 3 subscales selected from the Diagnostic and Statistical Manual of Mental Disorders-IV as assessed by the Conners’ Rating Scale (1997) for teachers; Continuous Performance Test, a computer-assisted examination based on animal silhouettes; and 2 subscales of the Wechsler Intelligence Scale for Children, Third Edition, processing speed and freedom from distractibility. 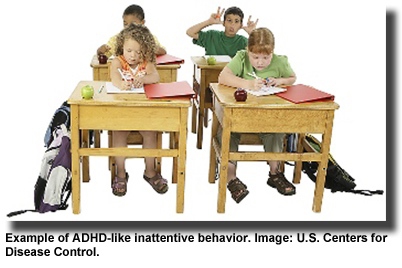 The study evaluated ADHD-related performance on various neuropsychological tests selected to reflect the symptoms of ADHD. Without a clinical diagnosis of the offspring, the study was unable to determine the incidence of ADHD. The investigators analyzed the adjusted association between maternal hair mercury levels and total Conners’ Rating Scale scores using a nonparametric regression technique known as penalized splines (a technique to smooth the curve). They observed a break in the curve between 0.5 and 1.0 μg/g of mercury where the total scores began to increase as the level of mercury rose. For this reason, they divided the Conners’ performance scores into those above and below 1.0 μg/g of hair mercury. The investigators observed a significant increase in the risk of inattentive, impulsive/hyperactive and combined behaviors in the children with maternal hair mercury levels at 1 μg/g or greater (RR = 1.7, 95% CI, 1.2 – 2.4) in adjusted analysis of the Conners’ scores (Table). Relative risks were also determined for mercury exposure with maternal fish consumption controlled (Table, RR + Fish), but risks were not affected. Higher maternal hair mercury was also associated with greater errors of commission and slower mental processing speeds. Relative risks of poorer performance scores showed few differences between girls and boys, except for substantially slower processing speeds and greater distractibility among boys. Most notably, when the performance scores were analyzed in terms of maternal fish consumption during pregnancy (less than 2 fish servings per week vs 2 or more fish servings per week), with and without adjustment for mercury exposure, lower relative risks, that is, significantly improved performance scores were observed for all Conners’ Rating Scale evaluations (Table). Scores for processing speed and distractibility were also improved, but with high variability among scores, the relative risks were not statistically significant. Controlling for maternal mercury had little effect on the risks except for processing speed and distractibility (Table, RR + Mercury). The associations with maternal fish consumption were unrelated to the sex of the child. 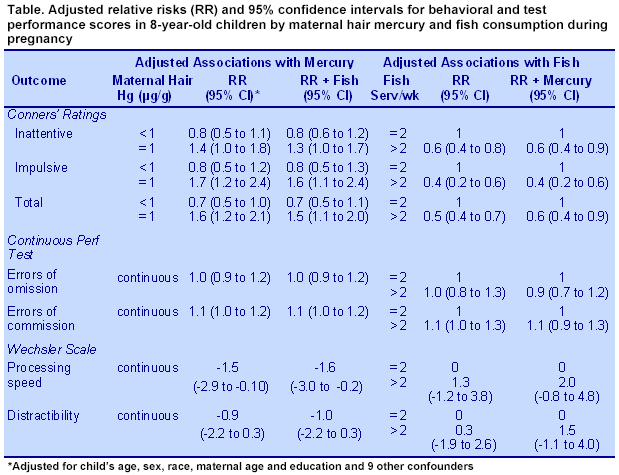 In this study of the relationship between prenatal exposure to mercury and the risk of ADHD-type behaviors at age 8, risk increased in a curvilinear fashion as maternal hair mercury exceeded 1.0 μg/g. Adjustment for fish consumption did not alter the association between higher maternal hair mercury levels and higher scores for ADHD-associated behaviors. 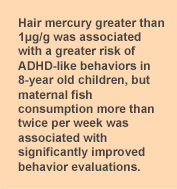