Age-related macular degeneration (AMD), an eye disease that damages the retina and blurs an individual’s central vision, can interfere with the ability to read and drive. It mainly affects people over the age of 50 and begins with the formation of yellow or white deposits or drusen under the retina (Figure). Enlarged drusen indicate early AMD, which may progress to advanced disease and eventually blindness. In developed countries, AMD is the leading cause of blindness. The U.S. Centers for Disease Control estimate that 1.8 million Americans over the age of 40 are affected by AMD with more than 7 million having large drusen and at risk for advanced AMD. 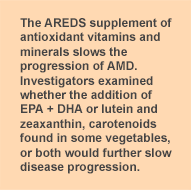 The origin of AMD involves genetic susceptibility, aging, metabolic and environmental factors to which smoking, hypertension, obesity and diet contribute. The last several years have seen an emphasis on several nutritional factors that affect the risk and progression of AMD. Among these are antioxidant vitamins, zinc and long-chain n-3 PUFAs (n-3 LC-PUFA). The Age-Related Eye Disease Study (AREDS) showed that supplementation with antioxidant vitamins and minerals reduced the risk of advanced AMD by 25% after 5 years. It was subsequently reported that dietary intake of lutein and zeaxanthin, carotenoid pigments found naturally in the macula, was inversely associated with neovascular AMD, geographic atrophy and large or extensive intermediate drusen. High plasma levels of n-3 LC-PUFAs have also been associated with a significantly lower risk of late AMD. Further, individuals at high risk of advanced AMD with the highest intakes of n-3 LC-PUFAs were the least likely to progress to advanced disease. These observations led to the second AREDS trial to determine whether the addition of lutein and zeaxanthin with or without supplemental DHA + EPA to the original AREDS supplement would reduce the risk of advanced AMD. Findings from this 5-year trial are described here. Participants in the trial were at high risk of progression to advanced AMD because of the presence of large drusen in both eyes or in one eye with advanced AMD in the other eye. The 4,203 enrollees were between the ages of 50 and 85 years, with a mean age of 73 and without other eye or systemic diseases. Participants were randomized to consume the AREDS supplement of antioxidant vitamins, zinc and copper plus one of the following: 10 mg lutein and 2 mg zeaxanthin or 350 mg DHA and 650 mg EPA or both. A placebo group received only the AREDS supplement. A second part of the study evaluated the effect of changing the original AREDS supplement by removing beta-carotene or reducing the level of zinc or both changes. The control group received the original AREDS supplement with no changes. This study involved 3,036 volunteers from the primary trial. Assessments occurred annually for comprehensive eye examinations with blood samples taken in a subset of 545 participants at years 1, 3 and 5 for measurement of serum lipids, lutein + zeaxanthin, fat-soluble vitamins, zinc and copper.

The primary outcome was the development of advanced AMD with central geographic atrophy or choroidal neovascularization assessed using stereoscopic fundus photographs or a history of treatment for advanced AMD after enrolment. Secondary outcomes included progression to moderate vision loss from baseline or treatment for choroidal neovascularization. Baseline data indicated that the participants had significantly higher serum levels of lutein and zeaxanthin and DHA and EPA compared with National Health and Nutrition Examination Survey data from 2005 to 2006. At the end of the study, those who consumed the DHA + EPA supplements experienced a 30 to 40% increase in serum DHA and a 90 to 120% increase in EPA. Those who consumed supplemental lutein + zeaxanthin had increased serum levels, which were lower in the group taking the AREDS supplement containing beta-carotene compared with those in the AREDS formula without beta-carotene (39.1 ± 18.7 vs 46.9 ± 20.3 μg/dL, P = 0.02). Comparisons among the 3 treatment groups with the placebo group in the main study showed no significant reductions in the progression to advanced AMD (Table). In exploratory secondary analysis where the effect of treatment was compared with no treatment in each group there was no significant effect of DHA + EPA vs no DHA + EPA. A similar analysis for lutein + zeaxanthin also showed no effect. In the second study, lowering the zinc dose and eliminating beta-carotene had no significant effect on disease progression. 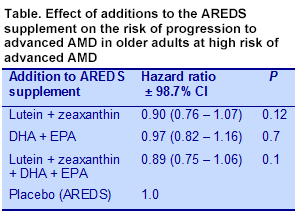 The investigators also conducted subgroup analyses within each treatment group, comparing the lowest quintile of lutein + zeaxanthin consumption with no intake. The risk associated with a small intake compared with no consumption was reduced by 26% (hazard ratio = 0.74: 95% CI, 0.59 – 0.94, P = 0.01). Comparison between the lowest and highest quintiles of intake was not significant. An additional post hoc analysis compared participants who received lutein + zeaxanthin plus the AREDS supplement lacking beta-carotene with participants who consumed only the AREDS supplement with beta-carotene. In this comparison, those consuming the lutein + zeaxanthin plus the beta-carotene-free AREDS supplement, the risk of progressing to advanced AMD was significantly reduced by 18% (hazard ratio = 0.82; 95% CI, 0.69 – 0.96, P = 0.02) and for neovascular AMD by 22% (hazard ratio = 0.78; 95% CI, 0.64 – 0.94, P = 0.02), but was not significant for the risk of central geographic atrophy. None of the nutrient additions to the AREDS formula were associated with the risk of declining vision. Elimination of beta-carotene and zinc reduction in the AREDS supplement also had no effect. Although the rationale for increasing the intakes of lutein and zeaxanthin and EPA + DHA in individuals with AMD who were consuming the original AREDS supplement was sound, finding no further reduction in disease progression with these dietary additions might indicate that these participants had already achieved the minimum nutrient status that could affect the advance of the condition. The participants were well educated and nourished, with median intakes of n-3 LC-PUFAs nearly twice the population average and serum lutein and zeaxanthin levels significantly higher than the general population. There was a suggestion from the data that only those whose intakes of lutein and zeaxanthin were in the lowest quintile might benefit from supplementation. The study also presented suggestive evidence that lutein and zeaxanthin may be less well absorbed in the presence of high doses of beta-carotene. Reducing the zinc level did not affect any outcome. The investigators noted that among nonsmoking participants, those consuming beta-carotene developed significantly more lung cancers than those not taking beta-carotene. Nearly all of those who developed lung cancer were former smokers. There were no differences among groups in mortality. Although the data are not conclusive, this study suggests that the inclusion of lutein and zeaxanthin without beta-carotene in the AREDS supplement might be associated with a lower health risk among smokers and past smokers at high risk of AMD.   Age-Related Eye Disease Study 2 Research Group. Lutein + zeaxanthin and omega-3 fatty acids for age-related macular degeneration: the Age-Related Eye Disease Study 2 (AREDS2) randomized clinical trial. JAMA 2013;309:2005-2015. [PubMed] Worth Noting Arnold C, Winter L, Fröhlich K, Jentsch S, Dawczynski J, Jahreis G, Böhm V.  Macular xanthophylls and ω-3 long-chain polyunsaturated fatty acids in age-related macular degeneration: a randomized trial. JAMA Ophthalmol 2013:131:564-572. [PubMed] Merle BM, Delyfer MN, Korobelnik JF, Rougier MB, Malet F, Féart C, Le Goff M, Peuchant E, Letenneur L, Dartigues JF, Colin J, Barberger-Gateau P, Delcourt C. High concentrations of plasma n3 fatty acids are associated with decreased risk for late age-related macular degeneration. J Nutr 2013;143:505-511. [PubMed] Open Access Souied EH, Delcourt C, Querques G, Bassols A, Merle B, Zourdani A, Smith T, Benlian P; Nutritional AMD Treatment 2 Study Group. Oral docosahexaenoic acid in the prevention of exudative age-related macular degeneration: The Nutritional AMD Treatment 2 Study. Ophthalmology 2013;120:1619-1631. [PubMed]