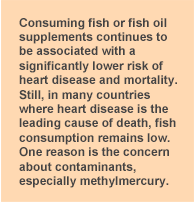 Eating fish regularly or consuming supplements containing fish oil or long-chain omega-3 fatty acids has been associated with a significantly lower risk of developing heart disease and dying from it according to many studies. Although not all studies have reached the same conclusion, there is enough evidence favoring the heart-health benefits of eating fish that many health authorities worldwide have recommended that all adults increase the amount of fish they consume. Still, in many countries where heart disease is the leading cause of death, fish consumption remains low. One reason for this is concern about contaminants, especially methylmercury, the form of mercury found in fish. The greatest risk from high levels of methylmercury is to the developing fetus. For nonpregnant adults, the possible risk from methylmercury in fish is less clear. This is particularly true with respect to heart disease and heart attack (myocardial infarction, Figure). Most exposure to mercury comes from eating fish, which provides many nutrients that lower the risks associated with mercury. Two examples are selenium, which makes mercury unavailable to cells, and long-

chain omega-3 fatty acids, which are associated with protection against heart disease. Thus, the real effects of small amounts of mercury in fish are part of a complex situation. If studies do not account for these confounding factors, the risk attributed to mercury may seem greater than it really is. Similarly, the benefits may be overstated. Researchers in Sweden took a closer look at the risks of a heart attack associated with mercury and nutrients in fish. They combined data from 2 large studies in Sweden and Finland where consumption of long-chain omega-3s and mercury differ because of the different types of fish eaten in each country. Mercury measured in hair was higher in the Finnish participants, while blood levels of EPA and DHA, the two main long-chain omega-3s in fish, were higher in the Swedish participants. Fish consumed in Finland include more freshwater species with higher levels of mercury and less omega-3s. In contrast, Swedes eat more fish with higher levels of omega-3s and less mercury. Combining the data from both populations provided a wider range of omega-3 and mercury intakes. The investigators also relied on measurements in tissues for their assessment of exposure, a more reliable approach than food intake information. The data analysis showed that higher blood levels of EPA + DHA 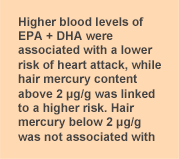 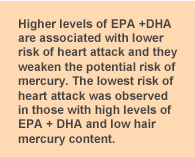 How closely do the extremes of risk mirror real-world conditions? One is most concerned about the highest risk, but this situation is highly unusual. Most fish species found in the marketplace have low levels of mercury, even though the amount of EPA + DHA they contain varies with the species. Oily fish such as salmon, sardines, pilchards and rainbow trout have the greatest amount of long-chain omega-3s, while lean white species such as flounder, sole, cod and plaice have much less omega-3s. The less common situation of fish with high mercury levels is more likely to occur from eating fish from fresh-water environments that have been contaminated with industrial pollutants or from the frequent consumption of very long-lived species of fish. These fish are mostly caught by recreational fishers, not commercial fishing. This study is valuable for several reasons. First, it demonstrates that higher levels of EPA +DHA are associated with lower risk of heart attack and they weaken the potential risk of mercury. Second, they show that exposure to mercury may only increase risk when the accumulation of mercury is substantial, above 2 μg/g in hair. For perspective, hair mercury in adult women in the U.S. is one-tenth that amount. The authors of the study also point out that there were very few participants who had such high hair mercury levels. Finally, a more accurate picture of the risks and benefits associated with eating fish regularly is given when the analysis includes multiple factors, such as omega-3s and mercury. The study also found that the benefits of fish consumption associated with the risk of a heart attack outweighed the potential risks.