One of the most commonly used assessments of a person’s risk of heart disease is the profile of lipoproteins in the blood. These include low-density lipoprotein cholesterol (LDL), the infamous “bad” cholesterol; high-density lipoprotein cholesterol (HDL) or “good” cholesterol; triglycerides or blood fats and total cholesterol. A favorable distribution of these lipoproteins and normal values for them are associated with a significantly lower risk of heart disease. These measures are some of the many factors that contribute to the risk of heart disease. As with many things, size matters. LDL particles that are smaller and denser are associated with a higher risk of ischemic heart disease than larger, less dense ones. Similarly, small HDL particles are associated with greater disease risk. In contrast, larger very-low-density lipoproteins (VLDL) are linked to greater disease risk. These lipoproteins carry triglycerides and other lipids produced in the liver and circulation. These complexities mean that the total amounts of these lipids tell only part of the story. The size distribution of these particles is illustrated in the Figure. 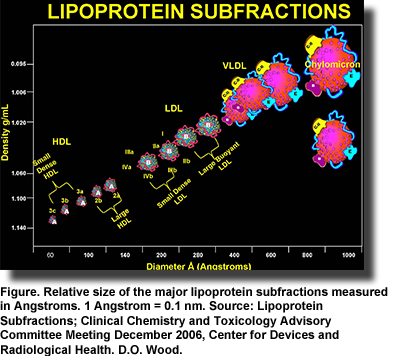 Dietary fats affect the levels of these circulating lipids. As is well known, vegetable oils rich in omega-6 fatty acids tend to lower LDL-cholesterol levels, while the omega-3 fatty acids found mainly in seafood (seafood omega-3s) tend to raise HDL-cholesterol levels, lower triglycerides, but may modestly increase LDL-cholesterol. Dietary fats and their derivatives also affect other factors that contribute to the risk of heart disease, such as inflammation, blood clotting and the dilation or constriction of blood vessels. In general, the effects of omega-6 fatty acids are counteracted by seafood omega-3s, but most Western diets have large amounts of omega-6s and only small amounts of omega-3s, especially those found mainly in fish and shellfish. The net effect is that the health-protective effects of seafood omega-3s are often not widely experienced.

A few populations customarily consume large amounts of seafood omega-3s because they eat plenty of fish and seafood. These include the Japanese living in Japan, other island nations and native Alaskans and Inuit. These populations usually have much less heart disease than Western populations, in part because of their omega-3 consumption. However, in native Alaskans and the Inuit, dietary habits have changed rapidly and heart disease, type 2 diabetes and other chronic diseases have increased dramatically. Studying the changes in the lipid and lipoprotein profiles of these populations may provide more clues about their relationship to heart disease. An ongoing study of Alaska natives from the Norton Sound Region of Alaska has reported data on the lipoprotein profiles of the majority of adults living in 8 villages in the region. The study examined the differences between men and women in lipoprotein pattern and the effect of seafood omega-3 consumption on these measures. Women had a more favorable pattern of lipoproteins with lower VLDL and LDL levels and higher HDL concentrations than men. The size distribution of the lipoproteins was also more favorable, with women having fewer small dense LDL particles and more large HDL particles than men. 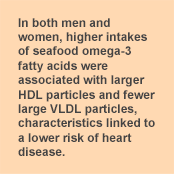 Women with the highest intakes of seafood omega-3s also had more favorable lipoprotein sizes compared with women in the lowest consumption group. For example, women with the highest intakes of omega-3s had significantly fewer small VLDL particles and more large HDL particles, patterns favorable to their risk of heart disease. They also had significantly lower triglycerides. In men, the highest omega-3 intake group did not differ from the lowest intake group in their VLDLs, but did have significantly larger HDL particles. They also had lower triglycerides, but the difference was not statistically significant. Even in a population with high intakes of seafood omega-3s, those with the highest intakes appeared to have more favorable lipoprotein-cholesterol profiles than those with lower intakes. These advantages appeared as fewer large VLDL particles and more of the larger HDL particles in both sexes. Women had more favorable lipid profiles overall and higher intakes of seafood omega-3s had some advantage in both men and women. A major caution, however, is that the effects of concentrations and particle sizes can be confounded by relationships with other lipid characteristics, so that the ultimate effects of these observations may remain unknown.