Evidence for a relationship between a mother’s consumption of fish, especially fatty fish, during pregnancy and the risk of her child developing asthma in childhood is inconsistent. Consumption of fish oil during pregnancy was associated with a significantly lower rate of allergic asthma at age 16 years. Some studies reported a lower occurrence of wheeze or asthma in early childhood or decreased severity of the condition among infants and children at high-risk of developing asthma, but others observed no effect. A few studies reported a lower risk of asthma or other atopic diseases in early childhood with fish consumption in the first year of life. Thus, there are questions about the effectiveness of fish or long-chain n-3 PUFA (n-3 LC-PUFA) consumption on the risk of asthma or wheeze, the best timing for exposure to fish or n-3 LC-PUFAs, and the dose or frequency of eating fish. Two new observational studies examined the relationship between fish consumption either in pregnancy or the first year of life and asthmatic symptoms or wheezing in childhood. Both reports are based on the Generation R birth cohort in Rotterdam, The Netherlands. In the first, the investigators looked at maternal fish consumption in pregnancy and the risks of wheezing or eczema in childhood in the first 4 years of life. They focused on the types of fish and frequency of seafood consumption. Participants included 2,796 mothers whose fish consumption was assessed during the first trimester of pregnancy. Fish categories included total, fatty, lean and shellfish. On average, mothers ate 83 g (3 oz) of fish per week, with nearly 19% of women not eating any fish. Thirty-eight percent of mothers had a history of asthma

or atopy. There was no association between the consumption of all fish or fatty fish during pregnancy with childhood wheezing from ages 1 to 4 years in multivariate-adjusted analysis. However, at age 3, a higher intake of lean fish was associated with a lower risk of wheezing, with a significant trend for less wheezing as fish consumption increased. In contrast, eating 1 to 13 g (< ½ oz) per week of shellfish, but not larger amounts, was linked to a significantly higher risk of wheezing in the first 4 years of life. The investigators also observed a higher risk of eczema in infants whose mothers ate 35 to 69 g of fatty fish per week (~1 to 2.5 oz per week), but risk was not greater with higher intakes. Eating small amounts of shellfish (1 to 13 g/week) was also associated with a higher risk of eczema, but the association was not observed with intakes above 14 g per week (1/2 oz). Stratification by maternal history of asthma or atopy abolished the statistical significance of the associations with eczema, but not for asthma. This study provides little evidence that maternal fish consumption of any type in pregnancy is associated with a lower risk of childhood wheezing or eczema. Instead, it raises the question of whether consuming fatty fish or a small amount of shellfish in the first trimester increases the risk of eczema. These observations have not been previously reported and need confirmation in other studies before they can be considered reliable. In the second report, the investigators looked at the relationship between the timing of the introduction of fish into a child’s diet and asthma-like symptoms at 36 or 48 months of age. There is some evidence that introducing fish into the child’s diet before the age of 1 year is associated with a lower risk of recurrent wheeze. Others reported a lower occurrence of allergic disease in children who consume fish before their first birthday. However, parents may hesitate to introduce fish into the child’s diet too early because of the risk of fish allergy.

These findings are based on nutritional and medical data for 7,210 children obtained using a food frequency questionnaire when the child was 14 months of age. Parents were twice asked how old the child was when first given fish. Fish was defined as fatty fish, other fish, including fish fingers, and white fish and consumption categories were none, less than half a serving per week or at least half a serving per week. The categories of introducing fish into the diet in the first year of life were never, 0 to 6 and 6 to 12 months. The presence of wheeze and shortness of breath was determined by questionnaire when the children were 36 and 48 months of age. Agreement with physician diagnosis was 75%. In this population, only 0.1% of the children did not eat any fish at 14 months of age. Those who ate fish in the first year of life ate more fish at 14 months of age than those who were introduced to fish after 1 year of age. Children who fist ate fish between 6 and 12 months of age were significantly less likely to experience wheezing at 48 months of age compared with children who did not eat fish in their first year (Table). Wheezing at 36 months of age was also lower in this group, but the difference was not statistically significant. 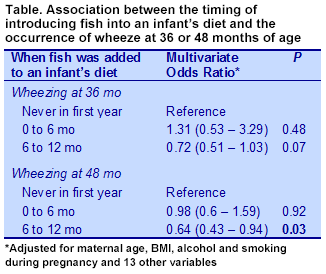 In contrast to these observations, the prevalence of wheeze at 48 months of age was greater in children whose fish introduction was between 0 and 6 months of age and in those who did not eat fish when compared with children given fish between 6 and 12 months of age. The amount and type of fish consumed was unrelated to the risk of wheeze. Although these findings do not provide conclusive answers to questions about the early consumption of fish and the risk of asthma-like symptoms, they confirm previous reports of a lower risk of wheeze in children who eat fish in the first year of life. In addition, they suggest that fish is best introduced between 6 and 12 months of age and that consumption before 6 months of age confers no advantage and might increase the risk of wheeze. Taken together, these studies suggest that a lower risk of childhood wheeze is associated with fish consumption between 6 and 12 months of age and that maternal fish consumption during pregnancy is not associated with the risk of wheeze in childhood.   Leermakers ET, Sonnenschein-van der Voort AM, Heppe DH, de Jongste JC, Moll HA, Franco OH, Hofman A, Jaddoe VW, Duijts L. Maternal fish consumption during pregnancy and risks of wheezing and eczema in childhood: The Generation R Study. Eur J Clin Nutr 2013;67:353-359. [PubMed] Kiefte-de Jong JC, deVries JH, Franco OH, Jaddoe VW, Hofman A, Raat H, de Jongste JC, Moll HA. Fish consumption in infancy and asthma-like symptoms at preschool age. Pediatrics 2012;130:1060-1068. [PubMed] Open Access