The long chain polyunsaturated fatty acids (PUFA) arachidonic acid (AA), eicosapentaenoic acid (EPA), and docosahexaenoic acid (DHA) are used by the body to produce lipid mediators, which are derivatives with a variety of functions including regulating inflammatory responses, while protecting tissues against inflammatory insult and infection. AA, EPA and DHA are substrates for enzymatic reactions that incorporate oxygen at specific locations in the fatty acid molecule with a well-defined stereospecificity (spatial orientation), underlying the formation of lipid mediators called eicosanoids when derived from AA and EPA (with 20 carbons) and docosanoids when formed from DHA (having 22 carbons). These lipid mediator families encompass the EPA-derived E-series resolvins, the DHA-derived D-series resolvins, protectins and maresins, and more recently docosapentaenoic acid (omega-3)-derived resolvins, protectins and maresins, which have been found to exert extremely potent anti-inflammatory and inflammation resolving actions in the body.

A few of these newly described substances have been studied in more detail, and have been recognized to constitute novel autacoids, local hormones which are generated in organs and by peripheral blood cells to locally activate G protein-coupled receptor-mediated cellular and tissue responses, followed by metabolic degradation. They have been collectively called Specialized Pro-resolving Lipid Mediators (SPMs) by the laboratory that discovered them. An expanding field of research is currently uncovering new mechanisms of their actions that may help us expand our understanding of the essential role of PUFA in health. It is important to determine to what extent the levels in body fluids reflect the situation within tissues in normal physiology as well as in disease. For human studies particularly, there is a need to improve and establish suitable methodologies for the measurement of PUFA-derived lipid mediators in blood and other biological fluids given the obvious difficulties to measure directly within tissues. Their transient nature due to rapid formation and fast metabolic degradation precludes the accumulation of high levels within tissues. The analytical chemistry required for the detection of SPM in vivo demands extremely high instrument sensitivity and specificity, as well as adequate sample isolation, storage, and extraction steps prior to analysis. The continued improvements in analytical methodologies and advances in the development of robust sample preparation methods allow researchers to progressively overcome previous limitations. As the field develops, this will also give dietitians and clinicians the means to monitor lipid mediator status in patients, for example in relation to supplementation with EPA and DHA through the diet. The present study by Colas and colleagues from the laboratory of Charles Serhan at the Brigham and Women´s Hospital Harvard Medical School in Boston, MA, USA, sets a reference for the developing field of omega-3-derived lipid mediator research by improved methodology for the detection of a range of lipid mediators in human plasma, serum and lymphoid organs. Noticeably, this study employs the use of reference materials to provide an indication as to baseline values for a range of SPMs and related PUFA-derived lipid mediators in human plasma and serum. 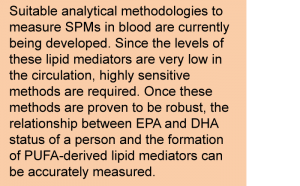 The methods described in this study build further on the previously developed strategies from this pioneering laboratory, which encompass the isolation of novel lipid mediator autacoids, synthesis of authentic standards, confirmation of postulated chemical structures, and detection of lipid mediators in cellular systems and in vivo tissues and fluids. In this study the authors placed further effort on the automation of sample preparation, improved control over sample stability, and robust identification of lipid mediators by liquid chromatography-tandem mass spectrometry (LC-MS/MS; an analytical methodology of choice in this field of research). The implementation of a more sensitive mass spectrometer, which pushes the detection limits for omega-3 PUFA-derived lipid mediators in plasma samples from the previous limit of detection of ~10 picogram to ~0.1 picogram, greatly expands the possibility to measure the levels of substances that previously were present below (undetectable) or close to the limit of detection. 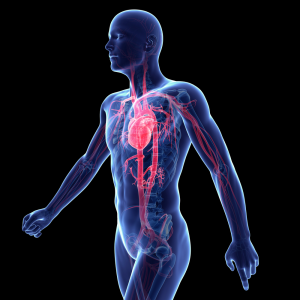 The characterization of reference materials is a strong point of this study and provides values for future studies that focus on measuring the levels of PUFA-derived mediators and metabolites in human plasma and serum. A reference human plasma (SRM 1950) prepared from pooled plasma from 100 healthy volunteers was acquired from the US National Institutes of Standards and Technology (NIST). Human serum was acquired from two commercial sources and corresponded to pooled human sera each from 100 healthy donors. Individual plasma and sera from individuals was also prepared freshly in the laboratory from venous blood samples obtained from healthy volunteers (n=10) before and 4 hours after taking 1.4 gram of encapsulated fish oil containing 650 mg EPA and 250 mg DHA as triglycerides, together with 81 mg aspirin given 2 hours after omega-3 supplementation. A low dose of aspirin is known to activate the formation of specific SPMs that have increased metabolic stability (so called aspirin-triggered resolvins). Serum was prepared from venous blood permitted to coagulate and undergo full clot formation during 24 hours at room temperature. Detailed methodological procedures are provided in the study. In summary, serum and plasma samples are carefully handled at cold temperatures, spiked with internal standards, and after precipitation of protein extracted by solid-phase extraction to isolate the lipid mediators. Substances are separated by HPLC and detected by tandem mass spectrometry with detection settings optimized for each analyte. Multiple reaction monitoring, a technique to sequentially and selectively weigh each eluting analyte, permits quantitation of specific lipid mediators. The detection of 6 diagnostic ions and recording of full mass spectra were used to confirm the identity of each detected analyte, SPM and pathway marker. Endogenous SPMs were shown to be relatively stable when serum was stored at -20oC for 5 days under the sample storage conditions used by the laboratory. Analytes were quantitated based on calibration with synthetic standards for each lipid mediator and the use of class-representative deuterated internal standards. Forty-three relevant PUFA-derived lipid mediators were reported in the study, including twenty-one DHA-derived mediators (covering the D-series resolvins, protectins and maresins, six EPA-derived mediators (including E-series resolvins), and sixteen AA-derived eicosanoids (including the lipoxins, as well as several leukotrienes, prostaglandins and thromboxane). Employing the optimized targeted lipidomics approach, the researchers first studied pooled human serum. Nearly all target compounds were detectable in levels ranging from a few picogram/ml to 2 nanogram/ml. Important SPMs such as DHA-derived resolvins D1 (RvD1), RvD2, RvD3, protectin D1, and maresin 1, EPA-derived resolvin E1 (RvE1), and the AA-derived lipoxin A4 were present in levels between 5 and 120 picogram/ml.

Analysis of the reference human plasma samples provided a very different picture with measurable levels of only RvD1, RvD5 and RvD6, 4S,14S-dihydroxy-DHA, RvE2, AA-derived leukotriene B4 (LTB4) and a number of other leukotriene pathway markers, as well as several prostanoids (prostaglandin (PG) D2, PGE2 and PGF2α). The concentrations of the lipid mediators that were detected in plasma were approximately ten- and a hundred-fold lower than in serum samples. Twenty-four lipid mediators that were measurable in human serum were undetectable (absent) in plasma. The results are important since they point out that serum contains many PUFA-derived lipid mediators that are not detectable in plasma, and these are most probably formed during the process of blood cell activation and blood clot formation. The neutrophil-activating lipid mediator LTB4 was the only measured lipid mediator present in plasma (at very low levels of 3.4 picogram/ml) but undetectable in serum. A range of SPMs which could not be detected in the reference plasma, were detectable in the freshly prepared plasma samples. These were present in very low levels, in the range of 0.1 to 9 picogram/ml. RvE1 that was absent in the reference pooled plasma sample, was present in freshly prepared plasma. This indicates that reference tissue fluids can be suitable as PUFA-derived lipid mediator standards, but only under conditions that are carefully controlled to preserve stability. Toward structure-function: Upon supplementation of human volunteers with EPA/DHA and aspirin treatment the levels of RvD1, RvD2, 17-epi-protectin D1, RvE2 and RvE3 rapidly increased. Specific individual lipid mediators appeared to decrease, pointing at a dynamic regulation of peripheral blood lipid mediator profiles upon intervention. The functional relevance of the increase in the sum of the plasma levels of RvD1, RvD2, RvE2, RvE3 and 17-epi-protectin D1 showed a fine relationship with the phagocytic activity of

human whole blood. In this respect, the stimulation of phagocytosis may constitute a useful readout of the inflammation resolution-promoting role of EPA and DHA. Basal phagocytotic activity in the limited number of healthy volunteers was significantly increased after just 4 hours of a single EPA/DHA supplementation together with low dose aspirin. A few studies have measured the levels of specific SPMs in the circulation. Mas and colleagues recently demonstrated the presence of RvD1 and RvD2 in plasma in concentration ranges about 10 fold higher than reported here, after 3 weeks of supplementation with EPA and DHA. In a metabolomic analysis by Psychogios and collaborators of pooled human plasma, both RvD1 and RvE1 were detected in concentrations approximately 3 and 20 fold higher, respectively. In addition to the SPMs investigated in detail in the present study, a range of lipid mediators derived from long chain PUFA have been described in the literature and are actively studied by various research groups interested in determining how profiles change upon dietary supplementation. It is also of interest to keep in mind that there are lipid mediators that have not yet been discovered given the continued description of new biologically active PUFA derivatives, and recent examples illustrate this point. The present study is highlighted as it sets one important milestone, and we will undoubtedly see continued and expanding interest in long chain PUFA-derived lipid mediators and their functions.