Sex Differences in the Effects of Omega-3s?

Posted by pufa | December 18, 2014
Cardiovascular Health, Prenatal & Infant Health
In biomedical research, metabolic and functional differences between the sexes for specific nutrients are often not specifically addressed and fully appreciated. Fundamental physiological processes that underlie the functioning of most organs are thought to be more similar than different between the sexes. So an interesting question is to what extent the function of essential fatty acids in health and disease is sex-dependent. Intuitively, dose-response differences may be expected, but do omega-3s and other PUFA serve qualitatively different purposes in male and female physiology?

Long-chain omega-3 PUFA play an extremely important role during the perinatal period, with integral clinical implications for women and their infants. In male reproductive health, there is early evidence that omega-3s adequacy may be important for male fertility. But for the proper functioning of organs and biochemical processes that are common to women and men, do qualitative differences exist in the roles of omega-3s and other PUFA? This is a topic that has received relatively little attention thus far, yet is likely very relevant. Conditional indispensability is a term that indicates that the need for specific essential fatty acids changes during the life cycle, from conception to death. Would sex constitute another condition that determines the requirement for a specific PUFA? And how would that translate into the needs of women vs. men? Researchers from the Nutraceuticals Group at the University of Newcastle, and the Haematology Research group at the Calvary Mater Hospital in Waratah, New South Wales, Australia made an interesting observation in 2009. They documented the aggregation properties of platelets from volunteers that were exposed to EPA or to DHA prior to exposing them to a stimulus which triggers their aggregation. Platelets are anucleated cells in the blood that sense damage to tissues by contacting damaged tissue structures that are normally not exposed to the blood in which they circulate, as well as to stressed endothelial cells lining the blood vessel lumen. Upon activation the platelets clump together to form an aggregate within a network of fibrin, initiating the formation of a blood clot that helps to confine an infectious stimulus and limit blood loss upon vascular injury. Platelet aggregation and coagulation are also central to heart infarcts and ischaemic stroke, occurring after many years of vascular damage and plaque buildup. Long chain omega-3 PUFAs have been shown to reduce platelet aggregation, and increased intake of EPA/DHA is associated with a decreased risk of atherothrombotic mortality. The researchers reported that in platelets 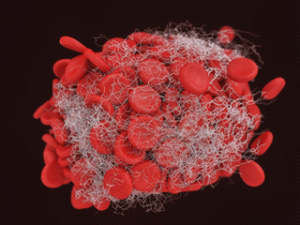 In both studies marked correlations between the levels of sex hormones and platelet aggregation were found. Following DHA supplementation, the plasma level of testosterone correlated positively with platelet aggregation, whereas in the context of EPA supplementation this association was negative. Of interest, in the four week study, men that received EPA displayed a modest but significantly reduced level of plasminogen-activator inhibitor-1 (PAI-1) in plasma compared to women who displayed a small increase in PAI-1 levels. PAI-1 constitutes an important control over fibrinolytic activity, critical for the timely dissolution of blood clots, through (negatively) regulating the activity of urokinase and tissue plasminogen activator. This study suggested that men may receive more benefit from EPA, and women more from DHA, to lower thrombotic disease risk. However, given that the in vivo sex-specific responses are qualitatively different from the direct in vitro responses on platelet aggregation, selective effects on different components of the hemostatic system in addition to fibrinolysis were possible. Precisely over which components of the hemostatic system EPA and DHA exerted their principal and differential actions remains to be addressed in further detail. To document in further detail the sex-specific effects of EPA and DHA on different coagulation factors involved in hemostasis, the authors recently reported the results of further research. Citrated blood samples taken at the end of the same four week intervention described above were analyzed for a number of important coagulation factors. The plasma levels of factors II (prothrombin), V, VII, VIII, IX and X were determined using coagulometric methods employing respective coagulation factor-deficient plasma samples. Fibrinogen (factor I), von Willebrand factor (factor VIII) activity and antigen, and the capacity to form thrombin (endogenous thrombin potential­) were also measured. There were no significant differences between men and women at baseline for the tested coagulation factors, or the plasma levels of DHA, docosapentaenoic acid or arachidonic acid. Women had a lower baseline level of EPA, a higher platelet count and aggregatory activity, compared to the men. As expected, baseline average levels of the sex hormones, testosterone and oestradiol, were significantly different between men and women.

After the four week supplementation period, plasma EPA and DHA levels had increased measurably in all subjects taken together in comparison to the control group. AA levels remained unchanged. As had been reported before, supplementation with EPA-rich oil or DHA-rich oil decreased platelet aggregation (by 11.8 and 14.8%, respectively). However, no measurable changes were found in any of the coagulation factors. Only when the test subjects were stratified by sex did any significant differences become apparent. EPA reduced platelet aggregation in men significantly more strongly (18.4% reduction) compared to women (5.5% reduction) and the control group. In DHA-supplemented subjects, the effect was much stronger in women (18.9% reduction) compared to men (9% reduction) and the control group (2.1% reduction). In men supplemented with EPA, prothrombin levels were reduced by 7.9%, which was a significant effect when compared to males that had received DHA (3% increase in prothrombin) and the control group (5.5% increase). No major changes in prothrombin were observed in women. Factor V levels were significantly decreased in men receiving EPA compared to the control group, but no significant changes were detected in women, or in men receiving DHA. Furthermore, a decrease in the plasma level of von Willebrand factor was found in the plasma of EPA-supplemented men compared to EPA-supplemented women. Another significant difference was that women who received the DHA supplement had higher incorporation of DHA into plasma lipids than men receiving DHA. Von Willebrand factor facilitates the binding of collagen to platelets, and a decrease may be involved in reduced platelet aggregation. Decreased levels of factor V and pro-thrombin lower the potential for coagulation through decreasing both thrombin formation and thrombin-stimulated formation of fibrin. The activity of EPA and DHA themselves with decreased platelet aggregation may also be related to the formation of microdomains in the platelet membrane that lower inter-platelet interactions, or through the formation of EPA- and DHA-derived lipid mediators with agonist-specific anti-platelet actions. The researchers examined the relationships between the level of sex hormones, platelet aggregation, and the identified coagulation factors that were affected by omega-3 intake after stratification by sex. An inverse association was found between testosterone levels and platelet aggregation after supplementation with EPA. Interestingly this association was positive after supplementation with DHA. Lower oestradiol levels were associated with lower prothrombin and factor V levels after EPA supplementation. Lastly, a positive association between the decrease in von Willebrand factor and reduction in platelet aggregation after EPA supplementation was observed. This study suggests there may be differences in the way that hemostasis is regulated by long chain omega-3 PUFA in men and women. Although there were no significant differences at baseline between men and women for prothrombin, factor V, von Willebrand factor, and DHA level, the statistical significance of the measured supplementation-induced changes in coagulation factors, platelet aggregation and plasma fatty acids was determined for the percentage changes in the values in blood samples collected at four weeks post-intervention with baseline values. An alternative and possibly more precise manner to determine statistically significant changes would have been to use absolute values of the various variables of interest and examine post-intervention results adjusted for baseline differences. Differential regulation of hemostasis by EPA and DHA in men and women was found to be strongly determined by the levels of progesterone and oestradiol. In men a negative association between platelet aggregation and testosterone levels was also associated with a negative association of the level of testosterone with DHA distribution into platelet phospholipids. Estrogens have been shown to increase plasma DHA levels in men, suggesting that the distribution and transfer of DHA to platelet membrane phospholipids is regulated by sex hormones, or that endogenous biosynthesis of DHA from omega-3 precursors is increased.

The results also imply that in men, improving DHA delivery to platelets may have a thromboprotective effect, but at higher testosterone levels, the male sex hormone dominates over oestradiol, and it is EPA that exerts control over the aggregability of platelets. These anti-aggregatory effects of EPA may be associated with measurable reductions in prothrombin, factor V, and von Willebrand factor. In women, the association appears to be the reverse, with DHA having anti-aggregatory effects in the context of DHA distribution into platelets. However, in women there were no specific changes in any of the tested coagulation factors that associated with the inhibitory effects of DHA. The study by Phang and colleagues suggests there may be differential regulation of hemostasis between the sexes by EPA and DHA. Intrinsic differences in the way that EPA and DHA are distributed and incorporated into platelet membranes appear to occur in men and women, likely under direct control of male and female sex hormones. But fundamental differences in the way that EPA and DHA regulate the levels of several components of the coagulation cascade, platelet reactivity itself, as well as the process of fibrinolysis, may also be at play. With chronic cardiovascular diseases frequently responsible for fatal infarcts and the debilitating disorders resulting from thromboemobolic events, taking into account the fundamental differences between men and women is of high relevance. It is hoped that these differences are further delineated, particularly in the diseased state, and may one day provide more precise recommendations for the consumption of long chain omega-3s in the population at risk.   Phang M, Scorgie FE, Seldon M, Garg ML, Lincz LF. Reduction of prothrombin and Factor V levels following supplementation with omega-3 fatty acids is sex dependent: a randomised controlled study. J. Nutr. Biochem. 2014;25(10):997-1002. [PubMed]   Worth Noting Agostoni C. Docosahexaenoic acid (DHA): from the maternal-foetal dyad to the complementary feeding period. Early Hum. Dev. 2010;86(Suppl. 1):3-6. [PubMed] Cunnane SC. The conditional nature of the dietary need for polyunsaturates: a proposal to reclassify 'essential fatty acids' as 'conditionally-indispensable' or 'conditionally-dispensable' fatty acids. Br. J. Nutr. 2000;84(6):803-812. [PubMed] Dona M, Fredman G, Schwab JM, Chiang N, Arita M, Goodarzi A, Cheng G, von Andrian UH, Serhan CN. Resolvin E1, an EPA-derived mediator in whole blood, selectively counterregulates leukocytes and platelets. Blood 2008;112(3):848-855. [PubMed] Giltay EJ, Gooren LJ, Toorians AW, Katan MB, Zock PL. Docosahexaenoic acid concentrations are higher in women than in men because of estrogenic effects. Am. J. Clin. Nutr. 2004;80(5):1167-1174. [PubMed] Holub BJ. Dietary fish oils containing eicosapentaenoic acid and the prevention of atherosclerosis and thrombosis. C.M.A.J. 1988;139(5):377-381. [PubMed] Phang M, Garg ML, Sinclair AJ. Inhibition of platelet aggregation by omega-3 polyunsaturated fatty acids is gender specific. Redefining platelet response to fish oils. Prostaglandins Leukot. Essent. Fatty Acids 2009;81(1):35-40. [PubMed] Phang M, Sinclair AJ, Lincz LF, Garg ML. Gender-specific inhibition of platelet aggregation following omega-3 fatty acid supplementation. Nutr. Metab. Cardiovasc. Dis. 2012;22(2):109-114. [PubMed] Phang M, Lincz LF, Garg ML. Eicosapentaenoic and docosahexaenoic acid supplementations reduce platelet aggregation and hemostatic markers differentially in men and women. J. Nutr. 2013;143(4):457-463. [PubMed] Safarinejad MR, Hosseini SY, Dadkhah F, Asgari MA. Relationship of omega-3 and omega-6 fatty acids with semen characteristics, and anti-oxidant status of seminal plasma: a comparison between fertile and infertile men. Clin. Nutr. 2010 29(1):100-105. [PubMed]