Posted by pufa | August 28, 2014
Prenatal & Infant Health
Short Bowel Syndrome (SBS) is a complication of low gestational age pre-term infants (<37 wks gestational age) who develop necrotizing enterocolitis, as a result of the surgical removal of a significant part of the inflamed and damaged intestinal tissue. SBS can also result from the need to resect a portion of the small intestine in neonates in several other disorders involving malformations, obstructions, or damage to the intestinal tract. Congenital cases of short small intestinal length occur, but are relatively rare. Loss of a large part of the small intestine significantly compromises nutrient absorption, and can lead to fluid imbalances. Pediatric SBS is associated with high morbidity and mortality, while care for pediatric SBS patients is extremely costly. 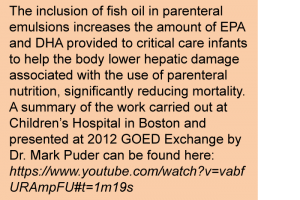 Since the 1960s, the treatment of SBS is supported by providing parenteral nutrition (PN) to deliver nutrients intravenously until the intestine hopefully regains function, and the intake of nutrients by the enteral route can be recovered. The use of PN is therefore transitory with the aim that infants can be weaned from the parenteral infusion within a period of several months. The gut has functional plasticity and can regain length after surgical resection but the outcome of SBS has not been easy to predict. The use of PN is traditionally associated with additional problems that can contribute to mortality, namely PN-related liver injury leading to cholestasis, and infections secondary to having an intravenous catheter in place. Mortality increases with duration of PN and can reach very high rates. The use of PN in pediatric SBS is viewed as a race between the recovery of intestinal function and the mortality associated with PN. Therefore, an important objective is to achieve weaning from PN as early as feasible. Weaned patients may still remain on rehydration by intravenous administration. Studies have been undertaken to better understand which factors determine and may predict survival and weaning from PN in pediatric SBS patients. Some key contributing factors include the length of remaining bowel as percentage of normal bowel length for a specific infant´s gestational age, as well as the development of cholestasis as a result of PN. It still remains difficult to predict individual patient outcomes, but some progress may be in the making. The aim of the study highlighted here is to review how changes in the employment of so-called hepatoprotective strategies and multidisciplinary care may have changed the outcomes of PN use in pediatric SBS, and to define the predictive factors in this clinical setting. 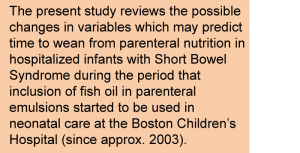 In the present study Fallon and colleagues have undertaken a retrospective review of medical records related to pediatric SBS at the Boston Children’s Hospital during the period 2004 through mid-2012. This period is characterized by the implementation of novel strategies found to lower the risk of developing liver injury in infants receiving PN and prevent the development of cholestasis, as well as improve multidisciplinary treatment of hospitalized infants. Cholestasis results from a decreased ability of the liver to excrete bile acids via the bile ducts as a consequence of liver parenchymal injury. In addition, with a view to reducing mortality it is essential to avoid the further transition of the injured liver to fibrosis. With hepatoprotective strategies it is understood that the specific composition of the emulsion used for the PN is changed in such a manner that the hepatotoxic effects are eliminated, and specific nutrients are provided that support liver function and tissue protection. This has been achieved in recent years in the author’s clinic through the employment of lipid emulsions characterized by a relative lowering of the content of vegetable oil-based lipids (particularly linoleic acid) and inclusion of fish-oil based lipids eicosapentaenoic acid (EPA) and docosahexaenoic acid (DHA). The present study looks at the use of PN in pediatric SBS and predictors of weaning from PN, covering a time period when medical attendance of pediatric SBS at this hospital has undergone some notable changes compared to older studies. 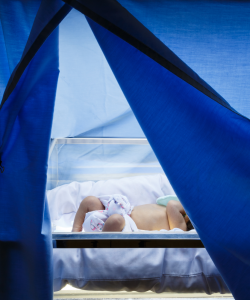 Demographic and clinical data were collected from medical records in the period of 2004-2009. Neonates had less than or equal to 100 cm of small intestine at no more than 30 days corrected gestational age, were diagnosed with a surgical gastrointestinal disease, and were PN-dependent for at least 2 weeks. Data on four study end-points were collected from the medical records of 63 neonates who met the inclusion criteria; i) wean from PN without reinitiation for at least 1 year, ii) PN dependence (the infant did not wean from PN), iii) transplant, or iv) death before the end of the study (mid June 2012). The investigators next calculated the probability that weaning from PN occurred, per each 10 cm increment of small intestinal length. The time to wean from PN for neonates with at least 50 cm of remaining intestine was compared with those having less than 50 cm of remaining small intestine by calculating the cumulative probabilities to wean from PN. Thereafter the predictive value for various parameters that might determine the probability to wean from PN was determined. Of the 63 neonates who met the study criteria, 40 weaned from PN (63%) and 11 remained PN-dependent at the end of the study (June 2012). Four neonates received a transplant and 8 died (12.7%) while on PN. Fifty-one (81%) of the patients had received a fish oil-containing lipid emulsion as PN, the rest an emulsion based on vegetable-oil based lipids. The median residual small intestinal length differed between neonates that weaned from PN (55.0 cm) and those that remained PN dependent (26.0 cm, P=0.006), were given a transplant (34.9 cm) and died (27.8 cm). Neonates who had 50% of the predicted small intestinal length had a 95% chance to wean from PN. For this group of infants the median duration of PN until wean was 4.6 months, whereas for infants with less than 50% of predicted length this period was about 4 times as long (17.8 months). The median PN duration for infants who weaned from PN was 6.5 months. Small intestinal length in SBS was the primary predictor of wean. Additionally, the number of surgical interventions, the number of infections and gestational age were associated with the success or failure to wean. In a multivariate analysis, only small intestinal length (positive association) and the intestinal lengthening procedure (which aims to provide an increased length of tissue that can potentially restore functional intestine; negatively associated) predicted the success of wean. These two factors as well as having the entirety of care executed within the author’s institution were predictors for the duration of time to wean. Implementation of fish-oil containing parenteral nutrition at the Children’s Hospital in Boston started from approximately 2003 onwards under a special compassionate care arrangement with a manufacturer of EPA/DHA-containing emulsions. A retrospective review of pediatric SBS over the period of 1977 to 2003, before the commencements of use of fish oil-containing parenteral emulsions, had shown that in a different children’s hospital, mortality was 27.5%, while 63.8% of SBS infants weaned from PN (Table 1). Risk factors that contributed significantly to mortality were cholestasis and small bowel length below 10% of expected length. The current review is timely since it reports on SBS cases in a subsequent eight-year time period. Although the collected data on pediatric SBS are still limited, it appears reasonable to view that in the present study mortality may be reduced. The authors point out that hepatoprotective intervention and a multidisciplinary care for SBS patients are helping to achieve this. No evidence is available yet to indicate that the percentage of infants that wean from PN is altered substantially, but the median duration of PN until wean may be shortened compared to studies covering the use of PN in infants without inclusion of long chain omega-3 PUFAs. 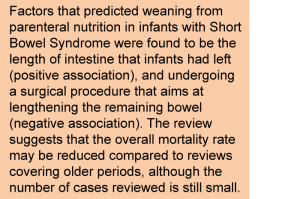 The retrospective study by Fallon and colleagues is highlighting the potential for progress in the treatment of pediatric SBS patients by potentially shortening the time on post-operative PN, and lowering mortality. The introduction of long chain omega-3 PUFA in parenteral emulsions is likely to help protect the liver during the time the gut is given a chance to restore and rebuild additional capacity to regain its function. The modulation of cholestasis as an outcome of the hepatoprotective strategy was not addressed in this study. Not all patients received PN containing omega-3 PUFAs, but the authors reported that there was no difference in the use of fish oil-containing PN emulsions between patients who died and those who did not. It is also a challenge to make adequate comparisons between results obtained from different clinical centers, and hopefully the variables associated with different hospital settings in the US and internationally can be addressed in multicenter evaluations in the future. Given the still limited numbers of patients who have been reviewed it will be of interest to see future studies that further document the potentially life-saving new approaches for SBS infants.   Fallon EM, Mitchell PD, Nehra D, Potemkin AK, O'Loughlin AA, Gura KM, Puder M. Neonates with Short Bowel Syndrome: An optimistic future for weaning from parenteral nutrition. JAMA Surg. 2014;May 14. [PubMed] (on file)   Worth Noting Chang MI, Puder M, Gura KM. The use of fish oil lipid emulsion in the treatment of intestinal failure associated liver disease (IFALD). Nutrients 2012;4(12):1828-1850. (PubMed) (open access) Spencer AU, Neaga A, West B, Safran J, Brown P, Btaiche I, Kuzma-O'Reilly B, Teitelbaum DH. Pediatric short bowel syndrome: redefining predictors of success. Ann. Surg. 2005;242(3):403-409. (PubMed) (open access) Spencer AU, Kovacevich D, McKinney-Barnett M, Hair D, Canham J, Maksym C, Teitelbaum DH. Pediatric short-bowel syndrome: the cost of comprehensive care. Am. J. Clin. Nutr. 2008;88(6):1552-1559. (PubMed) (open access) Squires RH, Duggan C, Teitelbaum DH, Wales PW, Balint J, Venick R, Rhee S, Sudan D, Mercer D, Martinez JA, Carter BA, Soden J, Horslen S, Rudolph JA, Kocoshis S, Superina R, Lawlor S, Haller T, Kurs-Lasky M, Belle SH, Consortium. PIF. Natural history of pediatric intestinal failure: initial report from the Pediatric Intestinal Failure Consortium. J. Pediatr. 2012;161(4):723-727. (PubMed) (open access)