Posted by pufa | April 29, 2015
Cardiovascular Health, Clinical Conditions
This article at a glance   Atrial fibrillation is the most common adverse event of coronary bypass artery grafting (CABG). “New onset” post-operative atrial fibrillation (POAF) can affect well over 30% of all patients after cardiac surgery. POAF leads to changes in hemodynamics, thromboembolic events, cognitive impairment, prolonged hospital stay, and increased healthcare costs. POAF is associated with a three to fourfold-increase in disabling cerebrovascular accidents and cardiac-related deaths, and is recognized as an independent predictor for long-term mortality. In the US alone nearly 400,000 persons underwent CABG intervention in 2010. Given the large numbers of patients undergoing coronary artery bypass grafting (CABG), prevention of cardiac-surgery induced atrial fibrillation is important. A range of risk factors for POAF have been identified. These include older age, male sex, high body mass index, greater left atrial dimension, a history of congestive heart failure, chronic obstructive pulmonary disease, and renal dysfunction. Active research is ongoing in identifying markers that can predict the predisposition to develop atrial fibrillation in patients scheduled for CABG.

Treatment options for prevention of POAF include the use of β-adrenergic receptor blockers, statins, aspirin, magnesium sulfate and amiodarone. Since most patients with coronary artery disease that require CABG are currently already being treated with β-adrenergic receptor blockers and statins, there is a significant need for reduction in the risk of POAF using other therapeutic options. One treatment option that is currently being investigated is the use of omega-3 long-chain polyunsaturated fatty acid (omega-3 LCPUFA) supplementation prior to, during, and/or after surgery, based on the notion of its efficacy in preventing ventricular arrhythmias. Although the precise mechanisms whereby the incidence of different types of arrhythmias is effectively lowered by omega-3 LCPUFA are not entirely clear, the usefulness of this approach has been recognized and is likely to depend on a patient’s baseline omega-3 status. A number of studies have assessed the potential effectiveness of perioperative supplementation with omega-3 LCPUFA on POAF, and the results are not consistent, with positive effects reported in some studies, no effect in other studies, and even suggestions of serious negative effects. 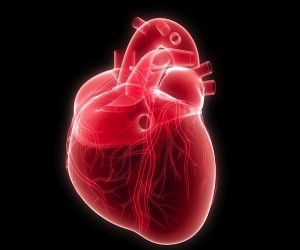 One possible cause of the diverse outcomes may be the heterogeneity of the enrolled patients. To address this possibility and narrow down to a more defined group of patients scheduled for CABG, Wilbring and colleagues at the Department of Cardiac Surgery, University Heart Center, in Dresden, Germany, have specifically looked at the potential effectiveness of perioperative oral administration of omega-3 LCPUFA on post-operative atrial fibrillation only in patients that had had a myocardial infarction within three months prior to CABG. The treatment group consisted of 99 patients receiving 950 mg EPA and 750 mg DHA g daily for five days before surgery and supplementation was continued after the operation. A matched control group of patients was created using a logistic regression model among patients undergoing CABG during the same time period but not receiving an omega-3 supplement. Matching was based on a wide number of patient variables, including age, sex, body mass, incidence of a number of diseases, and medication, in order to achieve baseline clinical comparability among the two groups. The primary end-point of the study was onset of post-operative atrial fibrillation. The study reports that all surgical procedures were uneventful, and complete revascularization was achieved in 58% of the treatment group and 72% of the patients of the control group. In the patients treated with omega-3s perioperatively, significantly fewer (31.3%) developed POAF compared to the patients in the control group (48%). During the first 15 days after surgery, patients treated with omega-3s suffered significantly less frequently from atrial fibrillation than control patients. A relative risk reduction by perioperative omega-3 use of 34.8% was determined, which was even higher among elderly patients (56%). Patients taking EPA/DHA perioperatively also had a significantly shorter stay in the intensive care unit, and displayed a reduced incidence of impaired wound healing (6.1% in the treatment group vs 14.3% in the control group). 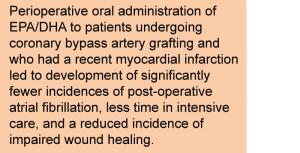 The results of the study are consistent with the conclusions of the GISSI-Prevenzione trial that showed anti-arrhythmic efficacy of EPA/DHA in patients with a prior myocardial infarction. That the “need” for having had a prior myocardial infarction is important to observe the effects of perioperative EPA/DHA in reducing POAF may also be appreciated in another recently published study. Lomivorotov and colleagues provided perioperative omega-3 LCPUFA in the form of intravenous administration of an omega-3 LCPUFA-rich emulsion to patients entering CABG. The omega-3-rich emulsion was given for 24 hours prior to surgery (200 mg/kg) and during the week after surgery (100 mg/kg per day). The primary outcome was the reduction in atrial fibrillation in the first seven days after the operation, and after two years. In this study only 10% of enrolled patients had had a prior myocardial infarction. No significant difference in the incidence of POAF was observed between patients that received omega-3 and the control patients. One of the conclusions of the study was to “focus on high-risk cardiac patients in future studies.” The study by Wilbring points out that if progress is to be made in understanding the potential of omega-3 LCPUFA in prevention and therapeutic use for lowering the risk of POAF, further segmentation of the patients by previous clinical history and underlying pathology needs to be made. Studies that specifically address the parameters that are hitherto placed within exclusion criteria of randomized and blinded studies are likely to unveil those patients that can receive additional benefit from omega-3 LCPUFA. Trials that pool together patients with multiple pre-existing conditions may miss the opportunities to better prepare patients ahead of surgery. Documentation of baseline fatty acid profiles may also help to provide a better indication as to which patients may receive more benefit from perioperative omega-3 LCPUFA supplementation. Fats of Life has previously highlighted studies that have observed a U-shaped dose-response relationship and this may need to be taken into account to understand the utility of omega-3 supplementation in reducing POAF. In other words, a precise definition of the patient group and the dose used appear to be two important determinants of the outcome of use of perioperative omega-3 LCPUFA supplementation. An interesting question arises: what happens to the levels of EPA and DHA during a myocardial infarction? Marked decreases in PUFA levels in the blood of patients with a recent myocardial infarction have recently been documented.   Wilbring M, Ploetze K, Bormann S, Waldow T, Matschke K. Omega-3 polyunsaturated fatty acids reduce the incidence of postoperative atrial fibrillation in patients with history of prior myocardial infarction undergoing isolated coronary artery bypass grafting. Thorac. Cardiovasc. Surg. 2014;62:569-574. [PubMed] Lomivorotov VV, Efremov SM, Pokushalov EA, Romanov AB, Ponomarev DN, Cherniavsky AM, Shilova AN, Karaskov AM, Lomivorotov VN. Randomized trial of fish oil infusion to prevent atrial fibrillation after cardiac surgery: data from an implantable continuous cardiac monitor. J. Cardiothorac. Vasc. Anesth. 2014;28(5):1278-1284. [PubMed]   Worth Noting Masson S, Wu JH, Simon C, Barlera S, Marchioli R, Mariani J, Macchia A, Lombardi F, Vago T, Aleksova A, Dreas L, Favaloro RR, Hershson AR, Puskas JD, Dozza L, Silletta MG, Tognoni G, Mozaffarian D, Latini R, Investigators. O. Circulating cardiac biomarkers and postoperative atrial fibrillation in the OPERA trial. Eur. J. Clin. Invest. 2015;45(2):170-178. [PubMed] Diodato M, Chedrawy EG. Coronary artery bypass graft surgery: the past, present, and future of myocardial revascularisation. Surg. Res. Pract. 2014;2014(726158):1-6. [PubMed] GISSI-Prevenzione_Investigators. Dietary supplementation with n-3 polyunsaturated fatty acids and vitamin E after myocardial infarction: results of the GISSI-Prevenzione trial. Gruppo Italiano per lo Studio della Sopravvivenza nell'Infarto miocardico. Lancet 1999;354(9177):447-455. [PubMed] Inpatient Surgery, Fast Stats, Centers for Disease Control and Prevention, Atlanta, USA. (http://www.cdc.gov/nchs/fastats/inpatient-surgery.htm) Marangoni F, Novo G, Perna G, Perrone Filardi P, Pirelli S, Ceroti M, Querci A, Poli A. Omega-6 and omega-3 polyunsaturated fatty acid levels are reduced in whole blood of Italian patients with a recent myocardial infarction: the AGE-IM study. Atherosclerosis 2014;232(2):334-338. [PubMed] Metcalf RG, Skuladottir GV, Indridason OS, Sullivan TR, Bjorgvinsdottir L, Sanders P, Arnar DO, Gibson RA, Heidarsdottir R, Cleland LG, Palsson R, Farquharson AL, Young GD, James MJ. U-shaped relationship between tissue docosahexaenoic acid and atrial fibrillation following cardiac surgery. Eur. J. Clin. Nutr. 2014;68(1):114-118. [PubMed] Rix TA, Christensen JH, Schmidt EB. Omega-3 fatty acids and cardiac arrhythmias. Curr. Opin. Clin. Nutr. Metab. Care 2013;16(2):168-173. [PubMed] Ruwald AC, Bloch Thomsen PE, Gang U, Jørgensen RM, Huikuri HV, Jons C. New-onset atrial fibrillation predicts malignant arrhythmias in post-myocardial infarction patients. A Cardiac Arrhythmias and RIsk Stratification after acute Myocardial infarction (CARISMA) substudy. Am. Heart J. 2013;166(5):855-863. [PubMed] Trimarco B. Omega-3 in antiarrhythmic therapy: pros position. High Blood Press. Cardiovasc. Prev. 2012;19(4):201-205. [PubMed] National Clinical Guideline Centre (UK). London: National Institute for Health and Care Excellence Atrial Fibrillation: The Management of Atrial Fibrillation. 2014;June. [Link] von Schacky C, Harris WS. Cardiovascular benefits of omega-3 fatty acids. Cardiovasc. Res. 2007;73(2):310-315. [PubMed]